Fewer unknowns in the laser nanosynthesis of composites 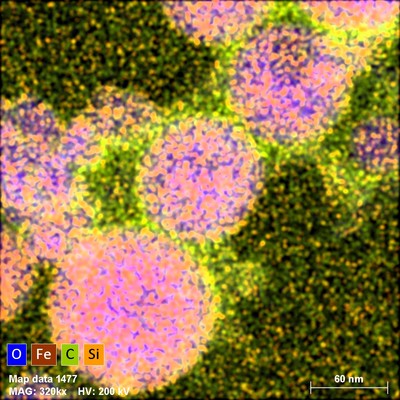 Microscopic photo of nanoparticles of one of the composites obtained by laser melting. False colours depict the distribution of oxygen, iron, carbon and silicon according to the key visible in the lower left corner. (Source: IFJ PAN)

Composite particles with submicron sizes can be produced by irradiating a suspension of nanoparticles with a laser beam. Violent physical and chemical processes take place during irradiation, many of which have to date been poorly understood. Recently completed experiments, carried out at the Institute of Nuclear Physics of the Polish Academy of Sciences in Cracow, have shed new light on some of these hitherto puzzles.

When a laser beam strikes agglomerates of nanoparticles suspended in a colloid, events occur that are as dramatic as they are useful. The tremendous increase in temperature leads to the melting together of nanoparticles into a composite particle. A thin layer of liquid next to the heated material rapidly transforms into vapour, whole sequences of chemical reactions take place under physical conditions that change in fractions of a second. Using the method presented here, called laser melting, scientists from the Institute of Nuclear Physics of the Polish Academy of Sciences (IFJ PAN) in Cracow not only produced new nanocomposites, but also described some of the poorly understood processes responsible for their formation.

“The laser melting process itself, consisting of irradiating particles of material in suspension with unfocused laser light, has been known for years. It is mainly used for the production of single component materials. We, as one of only two research teams in the world, are trying to use this technique to produce composite submicron particles. In this area, the field is still in its infancy, there are still many unknowns, hence our joy that some puzzles that perplexed us have just been unravelled,” says Dr. Żaneta Świątkowska-Warkocka, a professor at IFJ PAN, the co-author of a scienti¬fic article just published in the well-known journal Scientific Reports.

The most widely used and at the same time best known technique for the synthesis of nanomaterials using laser light is laser ablation: a macroscopic target is immersed in a liquid and then pulsed with a focused laser beam. Under the influence of photon impacts, nanoparticles of material are torn from the target and end up in the liquid, from which they can later be separated quite easily.

In the case of laser melting, the starting material is nanoparticles previously distributed in the entire volume of a liquid, where their loose agglomerates are formed. The laser beam used for irradiation this time is scattered, but selected in such a way as to provide energy in amounts sufficient to melt the nanoparticles. By means of laser melting, it is possible to produce materials constructed of particles ranging in size from nanometers to microns, of various chemical structures (pure metals, their oxides and carbides) and physical structures (homogeneous, alloys, composites), including those difficult to produce with other techniques (e.g. gold-iron, gold-cobalt, gold-nickel alloys).

The type of material formed during laser melting depends on many parameters. Obviously, the size and chemical composition of the starting nanoparticles is important, as is the intensity, efficiency and duration of the laser light pulses. Current theoretical models allowed scientists from the IFJ PAN to initially plan the process of producing new nanocomposites, but in practice, the attempts did not always lead to the creation of the materials that were expected. Obviously, there were factors involved that had not been taken into account in the models.

Dr. Mohammad Sadegh Shakeri, a physicist at the IFJ PAN responsible, among others, for the theoretical description of the interaction of nanoparticles with laser light, presents one of the problems as follows:

“The agglomerates of loosely connected nanoparticles suspended in the liquid absorb the energy of the laser beam, heat up above the melting point and bond permanently, while undergoing greater or lesser chemical transformations. Our theoretical models show that the temperature of nanoparticles can increase up to four thousand Kelvin in some cases. Unfortunately, there are no methods that can directly measure the temperature of the particles. Yet it is the temperature and its changes that are the most critical factors affecting the physical and chemical structure of the transformed material!”

In order to better understand the nature of the phenomena occurring during laser melting, in their latest research physicists from IFJ PAN used alpha-Fe2O3 hematite nanoparticles. They were introduced into three different organic solvents: ethyl alcohol, ethyl acetate and toluene. The container with the prepared colloid was placed in an ultrasonic washer, which guaranteed that there would be no uncontrolled compaction of particles. The samples were then irradiated with laser pulses lasting 10 ns, repeated at a frequency of 10 Hz, which, depending on the version of the experiment, resulted in the formation of particles with sizes ranging from 400 to 600 nanometers.

Detailed analyses of the produced nanocomposites allowed researchers from the IFJ PAN to discover how, depending on the parameters of the beam used, it is possible to determine the critical size of the particles that first begin to change under the influence of laser light. It was also confirmed that larger nanocomposite particles reach lower temperature, with hematite particles of si¬zes close to 200 nm heated to the highest temperature (theoretical estimates suggested here the value of 2320 K). However, the most interesting results in the experiments turned out to be those concerning liquids.

Above all, it was possible to observe a relationship between the dielectric constant of the liquid and the size of the produced composite particles: the smaller the constant, the larger were the agglomerates. The analyses also confirmed the assumption that a thin layer of liquid near a heated nanoparticle undergoes rapid decomposition during many chemical reactions. Since these reactions take place in different liquids differently, the resulting materials also differed in structure and chemical composition. The particles produced in ethyl acetate consisted of a practically uniform magnetite, whereas a magnetite-wustite composite was formed in ethyl alcohol.

“The role of liquids in the production of nanocomposites by laser melting turns out to be more important than everyone previously thought. We still know too little about many things. Fortunately, our current results suggest what the next research directions should be. The ultimate goal is to gain full knowledge about the processes taking place in the colloid and build theoretical models that would allow for the precise design of both nanocomposite properties and methods of their production on a larger scale,” sums up Dr. Świątkowska-Warkocka.

The described research was financed by the National Science Centre in Poland.

Microscopic photo of nanoparticles of one of the composites obtained by laser melting. False colours depict the distribution of oxygen, iron, carbon and silicon according to the key visible in the lower left corner. (Source: IFJ PAN) 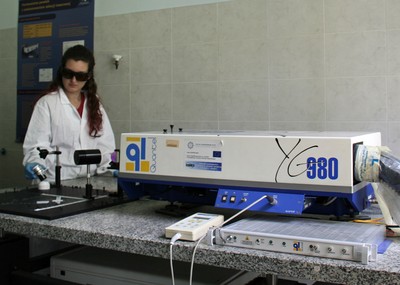 Apparatus for the production of nanocomposites by laser melting, used in research conducted by the Institute of Nuclear Physics of the Polish Academy of Sciences in Cracow. (Source: IFJ PAN)