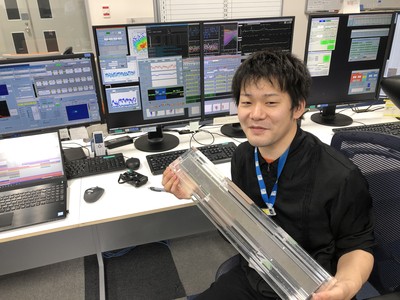 Ichiro Inoue working in the control room of SACLA (Japanese X-ray free-electron laser facility), where he is controlling the machine to generate twin XFEL pulses. He is holding an X-ray mirror for focusing the X-ray beam to micrometer size. (Source: SACLA / IFJ PAN)

Using X-ray laser pulses, the structure of matter can be studied with previously unprecedented accuracy. However, the pulses are so violent that they destroy the sample being irradiated. Notwithstanding, a Polish-Japanese team of physicists has just succeeded in demonstrating that atoms of the crystal under investigation react to an avalanche of photons with a certain delay. The discovery means that by using sufficiently short laser pulses, it will be possible to view an undisturbed structure of matter.

Is it possible to see chemical reactions of complex molecules at subatomic resolution? It seems so, but only with the use of free electron lasers (FEL). Lasers of this type are capable of generating X-ray pulses with unique qualities: not only are they ultra-short, measured in single femtoseconds (i.e. millionths of a billionth of a second!), but they also contain a great many photons. After irradiating a sample with such a pulse, a diffraction image is produced, from which physicists can attempt to reconstruct the spatial structure of the molecules. In this approach, however, there lurks a very serious problem...

„When we irradiate a sample with lots of high-energy photons, its atoms begin to interact with the radiation so strongly that the material is destroyed. So what do we see in the diffraction images recorded – the true structure of the sample or rather an image of its destruction?” asks Prof. Beata Ziaja-Motyka of the Institute of Nuclear Physics of the Polish Academy of Sciences (IFJ PAN) in Cracow and the Centre for Free-Electron Laser Research (CFEL) at DESY in Hamburg.

Prof. Ziaja-Motyka is a member of an international team of experimental and theoretical physicists led by Dr. Ichiro Inoue of Japan's RIKEN SPring-8 Center FEL facility. The group has been studying the interaction of laser X-ray pulses with matter for several years. In their latest paper, appearing in the prestigious physics journal Physical Review Letters, the scientists present the results of work on processes such as these in the case of corundum nanocrystals made up of oxygen and aluminium atoms. The experimental part was carried out using the SACLA X-ray laser operating in Hyogo, Japan.

„A unique feature of our laser is its ability to produce pulses of hard – that is, high-energy – X-rays that are both ultra-short and of a high intensity. In our research with corundum nanocrystals, we used pulses lasting just six femtoseconds. The data collected allowed us to estimate that the crystal atoms start to react to the photon beam with a delay of 20 femtoseconds”, says Dr. Inoue.

„The experimental results are in excellent agreement with the predictions of our models and simulations, where a similar delay also appears,” emphasises Prof. Ziaja-Motyka in turn, who, together with Dr. Victor Tkachenko (IFJ PAN), was involved in the theoretical description and simulations of the phenomena studied. „We believe that the main reason for this delay is the fact that the electrons located in atoms trapped in the nodes of the crystal lattice act a bit like a bumper and are the first to take up the impetus of the X-ray pulse”, adds Dr. Tkachenko.

The delayed response of oxygen and aluminium atoms in corundum to the X-ray pulse turns out to be a consequence of the following course of events. When photons of high energy enter the crystal, they transmit this energy mainly to the electrons in the atoms embedded in the nodes of the crystal lattice. As a result of this interaction, electrons are massively knocked out of the atoms. Due to the significant mass difference between the released electrons and the ionising atoms, the latter do not initially feel the recoil. However, the atoms themselves, hitherto electrically inert, become strongly electrically charged and begin to feel repulsion from their similarly charged neighbours. It is this process that takes about 20 femtoseconds. At an even later stage, the ions gain additional energy through interactions with the accelerated electrons. The final result is the destruction of the sample.

In the past, systems made up of atoms of different elements have already been studied with X-ray FEL lasers. However, pulses with durations of 15-20 femtoseconds were used to irradiate them. It is now known that it is on just such a time scale that atoms in the systems begin to respond to pulse irradiation. This fact means that the images obtained so far have represented structures already partially disturbed by interaction with the laser beam.

The agreement of the reaction times of atoms in the corundum nanocrystal to an X-ray pulse, measured in the latest experiment, with those predicted by simulations, allows us to optimistically consider further attempts to observe other, more complex systems, especially those containing light elements, which are the building blocks of living matter.

The structure of simple nanocrystals, such as corundum, is reproducible. Existing symmetries make it easy to make observations, analyse diffraction images and simulate the reactions of samples to laser pulses. Unfortunately, many interesting structures are devoid of symmetry. The far-reaching goal of the work of the Polish-Japanese team of physicists is therefore to develop methods and create tools that enable imaging and simulation of biologically relevant systems, such as protein conglomerates or single viruses.

„Currently, the times of performing computer simulations pose a particular challenge. The lack of symmetry in samples of biological interest forces us to model large systems. Calculations can then take many months. We are working on reducing them to single hours, which would speed up research and facilitate its practical application”, notes Prof. Ziaja-Motyka.

The participation of Polish physicists in this research was made possible thanks to a grant from the Polish National Academic Exchange Agency and an agreement between the Institute of Nuclear Physics of the PAS and the European XFEL centre in Hamburg, the organisation that manages the European free-electron laser.

Ichiro Inoue working in the control room of SACLA (Japanese X-ray free-electron laser facility), where he is controlling the machine to generate twin XFEL pulses. He is holding an X-ray mirror for focusing the X-ray beam to micrometer size. (Source: SACLA / IFJ PAN)