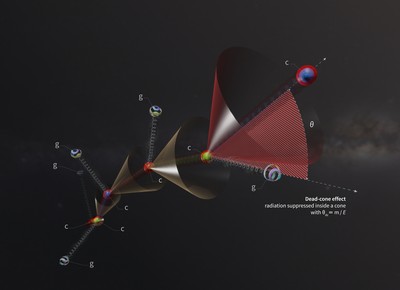 A cascade of particles and gluons initiated by a decelerating charm quark. The more developed the cascade, the lower the energies of secondary particles and the greater the opening angle of dead cones avoided by subsequent gluons. (Source: CERN)

A phenomenon that directly proves the existence of quark mass has been observed for the first time in extremely energetic collisions of lead nuclei. A team of physicists working on the ALICE detector at the Large Hadron Collider can boast this spectacular achievement – the observation of the dead cone effect.

The objects that make up our physical everyday life can have many different properties. Among these, a fundamental role is played by mass. Despite being so fundamental, mass has a surprisingly complex origin. Its primary source is the complex interactions binding triplets of quarks in the interiors of protons and neutrons. In modern physics it is assumed that the masses of the quarks themselves, originating from their interactions with the Higgs field (its manifestations are the famous Higgs bosons), contribute only a few percent to the mass of a proton or neutron. However, this has only been a hypothesis. Although the masses of single quarks have been determined from measurements for many years, only indirect methods were used. Now, thanks to the efforts of scientists and engineers working in Geneva at the LHC of the European Organization for Nuclear Research (CERN), it has finally been possible to observe a phenomenon that directly proves the existence of the mass of one of the heavy quarks.

“When lead nuclei collide at the LHC particle accelerator, the energy density can become so great that protons and neutrons decay and momentarily form quark-gluon plasma. The quarks inside then move in a powerful field of strong interactions and begin to lose energy by emitting gluons. However, they do this in a rather peculiar way, which our team was the first to succeed in observing,” Prof. Marek Kowalski from the Institute of Nuclear Physics of the Polish Academy of Sciences (IFJ PAN) in Cracow starts to explain. Prof. Kowalski is one of the members of a large international collaboration carrying out measurements using the ALICE detector.

Gluons are particles that carry strong interactions between quarks. Their role is therefore similar to that of photons, which are responsible for the electromagnetic interactions between, for example, electrons. In electrodynamics, there is a phenomenon concerning electrons decelerating in an electromagnetic field: they lose energy by emitting photons and the higher the energy of the electron, the more often the photons fly in a direction increasingly consistent with its direction of motion. This effect is the basis of free-electron lasers today – unique, powerful devices capable of producing ultra-short pulses of X-rays.

“Electrons decelerating in a magnetic field like to emit 'forward' photons, in an angular cone. The higher their original energy, the narrower the cone. Quarks have quite the opposite predilection. When they lose energy in a field of strong interactions, they emit gluons, but the lower the energy and the larger the mass of the quark, the fewer gluons fly 'forward',” says Prof. Kowalski and specifies: “It follows from the theory that there should be a certain angular cone around the direction of quark motion in which gluons do not appear. This cone – the more divergent, the lower the energy of the quark and the higher its mass – is called the dead cone.”

Theorists predicted the phenomenon of the dead cone more than 30 years ago. Unfortunately, its existence in experiments has so far been noticed only indirectly. Both the nature of the phenomenon and the recording process are extremely difficult to observe directly. A decelerating quark emits gluons, which themselves can emit further gluons at different angles or transform into secondary particles. These particles have smaller and smaller energies, so the gluons they emit will avoid larger and larger dead cones. To make matters worse, individual detectors can only record this complex cascade in its final state, at different distances from the collision point, and therefore at different times. To observe the dead cone effect, millions of cascades produced by charm quarks had to be reconstructed from fragmentary data. The analysis, performed with sophisticated statistical tools, included data collected during the three years the LHC was in operation.

Experimental confirmation of the existence of the dead cone phenomenon is an achievement of considerable physical significance. This is because the world of quarks and gluons is governed by strong interactions described by a theory called quantum chromodynamics, which predicts that the dead cone effect can only occur when a quark emitting gluons has non-zero mass. The present result, published in the prestigious journal Nature, is therefore the first direct experimental confirmation of the existence of quark masses.

“In the gigantic amount of data collected at the ALICE detector during the collision of lead nuclei and protons, we have traced a phenomenon that we know can only occur in nature when quarks have non-zero masses. Current measurements do not allow us to estimate the magnitude of the mass of the charm quarks we observed, nor do they tell us anything about the masses of quarks of other kinds. So we have a spectacular success, but in fact it is only a prelude to a long line of research,” stresses Prof. Kowalski.

The first direct observation of the dead cone effect involved only gluons emitted by charm (c) quarks. Scientists now intend to look for dead cones in processes involving quarks with larger masses, especially beauty (b) quarks. This will be a huge challenge because the higher the mass of the quark, the less frequently it is produced in collisions, and therefore the more difficult it will be to collect a number of cases that will guarantee adequate reliability of statistical analyses.

The reported research is of fundamental importance to modern physics. This is because the Standard Model is the basic tool currently used to describe phenomena involving elementary particles. Masses of quarks are the key constants here, responsible for the correspondence between theoretical description and physical reality. It is therefore hardly surprising that the observations of dead cones, raising hopes for direct measurements of quark masses, are of such interest to physicists.

A cascade of particles and gluons initiated by a decelerating charm quark. The more developed the cascade, the lower the energies of secondary particles and the greater the opening angle of dead cones avoided by subsequent gluons. (Source: CERN)