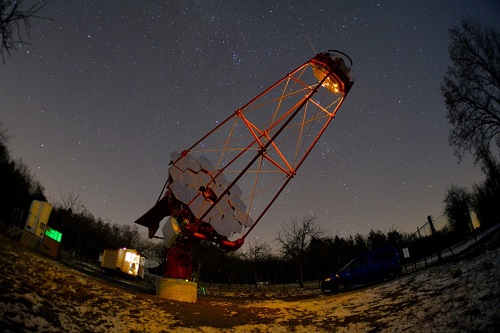 On Wednesday, February 23, 2022, during its testing on the grounds of the observatory at the Astronomical Institute of the Czech Academy of Sciences in Ondřejov, one of the two SST-1M Cherenkov telescopes (Fig. 1) recorded its first events initiated by high-energy particles of both the hadronic origin and originating from gamma-ray photons.

The SST-1M telescopes detect gamma-rays from cosmic high-energy sources in our Galaxy or in the extragalactic space. Recent data have been recorded in several celestial directions, including the surroundings of the Crab Nebula. The data include not only images of extensive air showers of many secondary particles created during the interactions of the primary particles in the atmosphere (Fig. 2), but also records of individual particles in the showers, in particular muons, seen as “muon rings” in the camera (Fig. 3). Muons are the clear signature of hadronic origin.

Two SST-1M (Single-mirror Small-sized Telescope) telescopes have been built at the Ondřejov Observatory since 2021. These telescopes were originally conceived as prototypes for the entire class of small-sized telescopes for the Cherenkov Telescope Array (CTA) project. The two SST-1M prototypes were first assembled as single units at a test site at the Institute of Nuclear Physics PAN in Kraków, Poland. In 2021 the telescopes were transported to and installed in Ondřejov. The first telescope is now fully operative and undergoes commissioning that includes first data taking. The second telescope will be equipped with its camera in about a month. After that the two SST-1M telescopes will for the first time start to take data together in the stereoscopic mode. One should note that the location at the Ondřejov Observatory offers a much better observing conditions than available at the test site in Kraków. The goal of the installation is to optimize the properties of the whole system, observe sources of cosmic gamma rays with energies in the range up to several TeV and then eventually deploy the well-tested telescopes at a final observing site at a higher altitude above the sea level and better weather conditions within a selected international project.

The SST-1M team is composed of members from multiple institutions in Poland, Czech Republic, Switzerland, and Ukraine. It is led by the University of Geneva. The responsibility for the optical system of the telescopes lies with the Czech Partner (Joint Laboratory of Optics of the Institute of Physics CAS and Palacky University Olomouc). The Astronomical Institute CAS hosts the SST-1M mini-array and provides support for the construction and operation of the telescopes. The Polish contribution is led by the Institute of Nuclear Physics PAN, where the mount of the telescope and its control system have been designed, built and tested. Nicolaus Copernicus Astronomical Center PAN in Warsaw is responsible for the telescope pointing and mirror alignment systems, and also camera and telescope servers and software. Space Research Center PAN in Warsaw designed the mirror actuators and contributed a complete set for one of the SST-1M telescopes. Jagiellonian University and AGH University of Science and Technology in Kraków developed and contributed to manufacturing the fully digital electronics for the camera, that digitizes the photon signals from all camera pixels despite their short duration of a few nanoseconds and the high rate of backgrounds due to night sky background. The Polish party has also contributed significant funds towards the construction of the necessary infrastructure in Ondřejov. The Swiss partners at the University of Geneva have designed and built the mechanical parts of the camera and a unique detection system of Cherenkov light based on a new technology using silicon photomultipliers (SiPM), only recently deployed in gamma-ray astronomy.

The design, construction and testing of the SST-1M telescopes at IFJ PAN and their assembly at the Ondřejov Observatory were carried out by engineers, technicians and scientists from the Department of Gamma- ray Astrophysics (NZ12) and the Division of Scientific Equipment and Infrastructure Construction (DAI) – Fig. 5. We would like to express our sincere thanks to all persons involved in this work.

The financial resources enabling the project to be implemented were granted by the Minister of Science and Higher Education through decision No. DIR/WK/2017/12 on financing the costs of the national contribution to participate in a joint international program entitled: "Technology demonstrator for a mini-array of small Cherenkov telescopes for the CTA project". The program is coordinated by the Institute of Nuclear Physics PAN on behalf of the "Polish Consortium of the Cherenkov Telescope Array Project".

Fig. 1. The SST-1M telescope during observations at the Ondřejov Observatory. 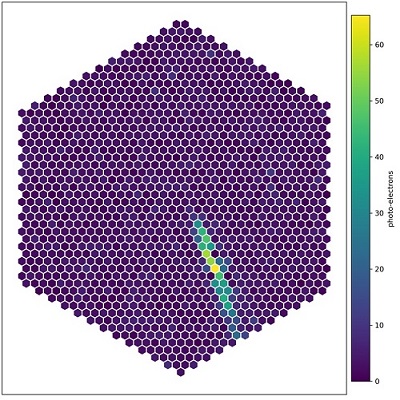 Fig. 2. Image of the Cherenkov light of an atmospheric air shower in the camera of the SST-1M telescope, initiated by a gamma ray. The image has a characteristic elongated shape that indicates the position of the source. 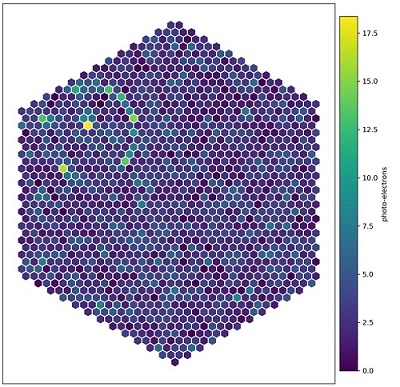 Fig. 3. Ring-shaped image of a muon recorded by the camera of the SST-1M telescope. 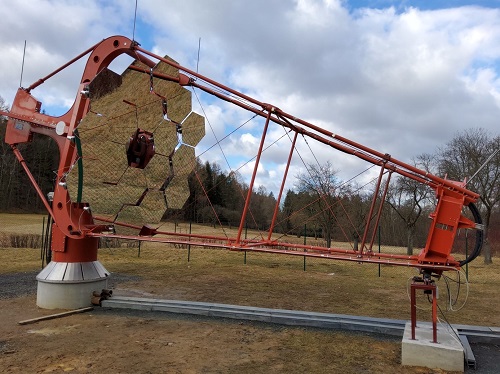 Fig. 4. The second SST-1M telescope installed at the Ondřejov Observatory. Soon the telescope will be equipped with a camera, which will make it possible to conduct observations in a stereoscopic mode with the use of two telescopes coupled into a mini-array. 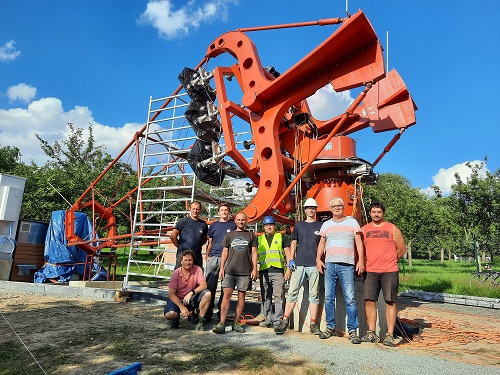 Fig. 5. A team from Krakow and the Czech Republic during the assembly of the first SST-1M telescope in August 2021.