From matter to antimatter, to and fro – trillions of times a second 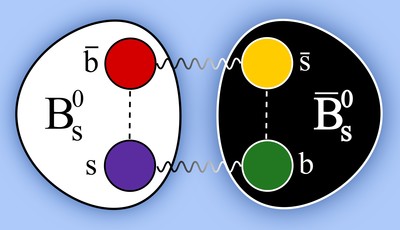 We think of matter and antimatter as being as opposite as fire and water. There are, however, particles that can behave as representatives once of the world of matter, once the world of antimatter. An international group of scientists working on experiments at the LHCb detector have reported their measurement of the extreme speed of oscillation of these sorts of particles between the two worlds.

Like a child on a swing, moving back and forth, there are particles that can change their properties many times with incredible speed, acting as representatives of the world of matter at one moment only to behave like antimatter in the next. Oscillations of particle properties between matter and antimatter are considered to be one of the most fascinating phenomena of quantum mechanics. In the case of the mesons known as Bs0, these oscillations have been measured with unpre¬ce-dented accuracy. The results of this unusual measurement were reported by a group of scientists carrying out experiments in the LHCb detector at the Large Hadron Collider. An article describing their work has appeared in Nature Physics.

“The first measurement of the Bs0 meson oscillation was carried out back in 2006, as part of the CDF experiment at the US Fermilab laboratory. We have now managed to improve the accuracy of the original measurement by as much as two orders of magnitude!”, says Dr. Agnieszka Dziurda from the Institute of Nuclear Physics of the Polish Academy of Sciences (IFJ PAN) in Cracow. Dr. Dziurda leads the international team of physicists who carried out this research.

The constituents of matter that make up the visible Universe are mainly up and down quarks, electrons and electron neutrinos. Inside the Standard Model, a complex theoretical tool that describes the world on atomic and subatomic scales, these particles are grouped into one gene-ration. It is known that two other generations exist. Both contain particles with similar properties to the first generation, only that they become more and more massive in subsequent generations.

In the Standard Model, every particle of matter has its counterpart in the form of an antiparticle that differs mainly in the sign of its electric charge (in the case of electrically neutral neutrinos, other quantum properties are important). Quarks do not like loneliness and always combine with others into particles. The simplest of these are mesons, i.e. pairs made up of a quark and an antiquark (not necessarily of the same kind).

“Mesons may carry an electric charge, but they do not have to. Those devoid of electric charge, refer¬red to as neutral, exhibit an intriguing feature – they oscillate between matter and antimatter forms. We focused on analysing the oscillation frequencies of neutral mesons Bs0 containing a third-generation beauty quark b and a second-generation strange quark s,” explains Dr. Dziurda.

As unstable particles, mesons decay quickly. It is no different with Bs0 mesons, whose life in the experiment in question ended after a single picosecond (that's a fraction of a second with 12 zeros after the decimal point). During this time Bs0 mesons covered a distance of about one centimetre and, as it turned out, they oscillated several times.

From a technical point of view, measuring a phenomenon of such high frequency proved to be extremely difficult. In particular, it required a deep understanding of the experimental techniques used in the detector, as these could have distorted the measurement. Only with this knowledge physicists were able to precisely reconstruct the trajectory of the recorded mesons and identify the particles into which it decayed.

“Quantum mechanics predicts that the decay products of the Bs0 meson must be different depen-ding on whether it was in a state of matter or antimatter at the time of the decay. Thus, only after recording and identifying the decay products of a given meson we could determine whether it decayed as a representative of the matter or antimatter world. Combining this knowledge with information about the nature of the particle at the time of its production allowed us to measure the oscillation frequency,” explains Dr. Dziurda.

The data analysed concerned Bs0 mesons created in proton-proton collisions with a total energy of 13 teraelectronvolts, recorded at the LHCb detector between 2015 and 2018. Ultimately, the researchers were able to determine that Bs0 mesons oscillate between matter and antimatter three trillion times per second, which is 300 times faster than the oscillation of a typical atomic clock built using caesium.

The result obtained by physicists from the LHCb experiment is not an empty encyclopaedic curiosity from the exotic world of quanta, but a measurement of wider significance. On the one hand, it agrees with the predictions of quantum mechanics at a new level of accuracy and is its beautiful illustration. On the other hand, the measured oscillation frequency of Bs0 mesons signi-ficantly narrows the search areas for particles undescribed by the Standard Model, including those suggested by many theorists to explain the anomalies observed in recent years. Perhaps traces of this new physics can be detected when the upgraded LHCb detector resumes recording colli-sions in 2022.