Remember: A personal dosimeter is waiting in your first aid kit! 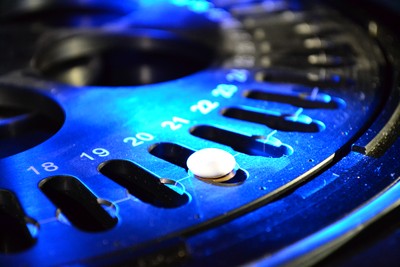 In a radiation emergency, popular painkillers can be used as personal dosimeters. (Source: IFJ PAN)

When proper precautions are taken, radioactive substances are extremely safe to use. But what if they leak into the environment in an uncontrolled manner? Then it becomes crucial to find out the dose of radiation people may have absorbed. Unfortunately, the average person does not possess a radiation dosimeter. The Institute of Nuclear Physics PAS has a new solution to this problem – and it can be found in your first aid kit.

Ionizing radiation is everywhere. It reaches us from deep space, from the Sun, it is emitted by rocks, building materials and even our bodies. It is used successfully in science, medicine and industry, especially in the energy sector. However, sometimes the intensity of the radiation increases significantly when forces of nature destroy the protective infrastructure of a reactor or as a result of human negligence. In such situations, the knowledge presented in the IEEE Sensors Journal by scientists from the Institute of Nuclear Physics of the Polish Academy of Sciences (IFJ PAN) in Cracow may prove helpful. In practice, it translates into a simple recommendation: in a radiation emergency, put some unpacked painkillers into your pocket or backpack and don't take them out into the daylight.

“As ionizing radiation in the environment suddenly increases, many problems arise. Their nature can be easily understood by analogy with the pandemic”, says Dr. Anna Mrozik (IFJ PAN), and continues to explain: “We lose the fight against coronavirus when there are too many people in need. First, there is a shortage of ventilators, then all the hospital beds are occupied, and finally doctors can't help all the patients. The situation is somewhat similar for events involving ionizing radiation. In this case, one of the main challenges is the instant lack of equipment, primarily dosimeters. Medical assistance would be effective if people could be initially segregated depen¬ding on the radiation dose absorbed by them. However, the absorbed dose is not known even by the victims themselves, since few people have access to personal dosimeters. And it is not possible to conjure up thousands of dosimeters immediately and distribute them literally in minutes among the population, especially if the threat occurs suddenly and over a large area.”

Emergency dosimetry deals with methods of measuring radiation doses that are makeshift but sufficiently reliable for medical purposes. In the early stages of its development, bricks or roof tiles taken from buildings in an area at risk were analyzed. These days, emergency dosimetry is becoming more and more personal: trying to use objects that people carry with them all the time, as these are exposed to the same radiation dose as their owners.

A smartphone, for example, can be used as an emergency dosimeter. Unfortunately, in this role it works differently than a layman would expect. Reliable assessment of the radiation dose using a smartphone is possible because some of its parts are made of materials with good dosimetric properties. These include the display glass and aluminum oxide (Al2O3) used in resistors. However, these materials need to be analyzed using specialized laboratory equipment. The display has to be broken and the microscopic resistors have to be carefully dismantled and destroyed to extract the material filling them. Preparation is laborious and time-consuming, which calls into question the usefulness of the method under the conditions of a real radiation accident, especially one on a large scale. Moreover, depriving a person in danger of a tool that can be used to call for help for themselves or others, to contact their family, or to get information about the current situation is a poor and potentially dangerous idea.

Since the destruction of a valuable and useful device does not seem to be the optimal solution, scientists from the Institute of Nuclear Physics of the PAS decided to check which of the materials available to everyone could meet the criteria of emergency dosimetry.

“In our Institute we deal with luminescent emergency dosimetry techniques: thermoluminescence or optically stimulated luminescence. In the first case, materials are stimulated to glow by heating; in the second, it is done with light of a specific wavelength, usually blue. A material is a good candidate for a dosimeter when, after stimulation, it begins to glow with a greater intensity the greater the radiation dose it has been exposed to. This dependence between the luminescence signal and the absorbed dose should be as linear as possible”, explains Prof. Pawel Bilski (IFJ PAN), the second author of the article in IEEE Sensors Journal.

The attention of the Cracow-based researchers was drawn to medicines, especially popular painkillers, which are an obligatory component of every home first aid kit and can also be found in many women's handbags. Their great advantage is the fact that people carry them on a daily basis, exactly as one should do with dosimeters. Moreover, these drugs have a well-known compo¬sition (as opposed to, for example, the fabric of clothes) and are usually hermetically sealed, thus protected against moisture and light – factors which are very harmful from the point of view of dosimetry. All of this means that the drug analysis procedures for dosimetry can be easily stan-dardized. In addition, preparation for testing is quick: all you need to do is unpack the tablet and crush it – and no one will protest. After all, the value of a single tablet is negligible, and there are usually several tablets in the package.

“Since painkillers have so many advantages as dosimeters, we looked at the properties of several of them. It turned out that when subjected to optically stimulated luminescence, they emit a fairly strong signal, more or less proportional to the absorbed dose of ionizing radiation – which is exactly what is needed to make a reliable measurement. Painkillers based on ibuprofen and para¬cetamol showed the highest sensitivity”, says Dr. Mrozik.

Which substance is responsible for the luminescence of painkillers? The answer is not yet known. Physicists from the IFJ PAN intend to identify it, as this would make it possible to select the drugs best suited for dosimetric purposes more effectively.

The latest research from Cracow provides a simple piece of advice worth remembering: if you find yourself in a radiation emergency, carry a few unpacked painkillers with you, preferably in your pocket where they will be protected from the harmful effects of daylight. It's a small thing, but in a critical situation it will enable medical services to help you more effectively.

In a radiation emergency, popular painkillers can be used as personal dosimeters. (Source: IFJ PAN)