Creation without contact in the collisions of lead and gold nuclei 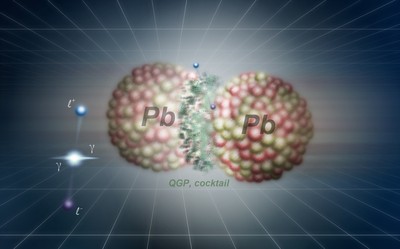 Semicentral or central collisions of lead nuclei in the LHC produce quark-gluon plasma and a cocktail with contributions of other particles. Simultaneously, clouds of photons surrounding the nuclei collide, resulting in the creation of lepton-antilepton pairs within the plasma and cocktail, and in the space around the nuclei. (Source: IFJ PAN)

When heavy ions, accelerated to the speed of light, collide with each other in the depths of European or American accelerators, quark-gluon plasma is formed for fractions of a second, or even its “cocktail” seasoned with other particles. According to scientists from the IFJ PAN, experimental data show that there are underestimated actors on the scene: photons. Their collisions lead to the emission of seemingly excess particles, the presence of which could not be explained.

Quark-gluon plasma is undoubtedly the most exotic state of matter thus far known to us. In the LHC at CERN near Geneva, it is formed during central collisions of two lead ions approaching each other from opposite directions, travelling at velocities very close to that of light. This quark-gluon soup is also sometimes seasoned with other particles. Unfortunately, the theoretical description of the course of events involving plasma and a cocktail of other sources fails to describe the data collected in the experiments. In an article published in Physics Letters B, a group of scientists from the Institute of Nuclear Physics of the Polish Academy of Sciences in Cracow explained the reason for the observed discrepancies. Data collected during collisions of lead nuclei in the LHC, as well as during collisions of gold nuclei in the RHIC at Brookhaven National Laboratory near New York, begin to agree with the theory when the description of the processes takes into account collisions between photons surrounding both interacting ions.

“With a pinch of salt, you could say that with sufficiently high energies, massive ions collide not only with their protons and neutrons, but even with their photon clouds”, says Dr. Mariola Klusek-Gawenda (IFJ PAN) and immediately clarifies: “When describing the collision of ions in the LHC we already took into account collisions between photons. However, they concerned only ultra-peripheral collisions, in which the ions do not hit each other, but pass by each other unchanged, interacting only with their own electromagnetic fields. No one thought that photon collisions could play any role in violent interactions where protons and neutrons merge into a quark-gluon soup.”

In conditions known from everyday life, photons do not collide with each other. However, when we are dealing with massive ions accelerated to almost the speed of light, the situation changes. The gold nucleus contains 79 protons, the lead nucleus as many as 82, so the electric charge of each ion is correspondingly many times greater than the elementary charge. The carriers of electromagnetic interactions are photons, so each ion can be treated as an object surrounded by a cloud of many photons. Moreover, in the RHIC and LHC, the ions move at speeds close to that of light. As a result, from the point of view of the observer in the laboratory, both they and their surrounding clouds of photons appear to be extremely thin patches, flattened in the direction of movement. With each passage of such a proton-neutron pancake, there is an extremely violent oscillation of the electric and magnetic fields.

In quantum electrodynamics, the theory used to describe electromagnetism with regard to quantum phenomena, there is a maximum critical value of the electric field, of the order of ten to sixteen volts per centimetre. It applies to static electric fields. In the case of collisions of massive atomic nuclei in the RHIC or LHC, we are dealing with dynamic fields appearing only for millionths of a billionth of one billionth of a second. For such an extremely short time, the electric fields in the collisions of ions can be even 100 times stronger than the critical value.

“In fact, the electric fields of ions colliding in the LHC or RHIC are so powerful that they generate virtual photons and their collisions occur. As a result of these processes, lepton-antilepton pairs are formed at various points around the ions where there was nothing material before. The particles of each pair move away from each other in a characteristic way: typically in opposite directions and almost perpendicular to the original direction of the movement of the ions”, explains Dr. Wolfgang Schäfer (IFJ PAN) and points out that the family of leptons includes electrons and their more massive counterparts: muons and tauons.

Photon interactions and the production of lepton-antilepton pairs associated with them are crucial in peripheral collisions. Collisions such as these were described by the physicists from Cracow a few years ago. To their surprise, they have now managed to show that the same phenomena also play a significant role in direct collisions of nuclei, even central ones. The data collected for gold nuclei in the RHIC and lead nuclei in the LHC show that during such collisions a certain “excess” number of electron-positron pairs appears, which diverge relatively slowly in directions almost perpendicular to the ion beams. It has been possible to explain their existence precisely just by taking into account the production of lepton-antilepton pairs by colliding photons.

“The real icing on the cake for us was the fact that by supplementing the existing tools for the description of massive ion collisions with our formalism built on the so-called Wigner distribution function, we could finally explain why the detectors of the largest contemporary accelerator experiments record these sorts of distributions of leptons and antileptons escaping from the site of the nuclear collisions (for a determined centrality of the collision). Our understanding of the most important processes taking place here has become more complete”, concludes Prof. Antoni Szczurek (IFJ PAN).

Work on the Cracow model of photon-photon collisions was financed by the Polish National Science Centre. The model has aroused the interest of physicists working with the ATLAS and ALICE detectors of the LHC and will be used in the next analyses of experimental data.

Semicentral or central collisions of lead nuclei in the LHC produce quark-gluon plasma and a cocktail with contributions of other particles. Simultaneously, clouds of photons surrounding the nuclei collide, resulting in the creation of lepton-antilepton pairs within the plasma and cocktail, and in the space around the nuclei. (Source: IFJ PAN)