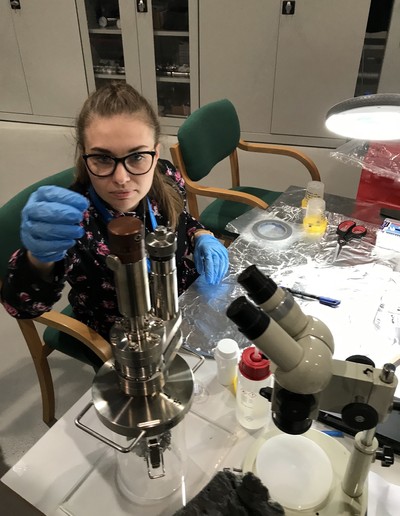 Few compounds are as important to industry and medicine today as titanium dioxide. Despite the variety and popularity of its applications, many issues related to the surface structure of materials made of this compound and the processes taking place therein remain unclear. Some of these secrets have just been revealed to scientists from the Institute of Nuclear Physics of the Polish Academy of Sciences. It was the first time they had used the SOLARIS synchrotron in their research.

It is found in many chemical reactions as a catalyst, as a pigment in plastics, paints or cosmetics and in medical implants it guarantees their high biocompatibility. Titanium dioxide (TiO2) is practically ubiquitous today, which does not mean that all its properties are already known to humanity. A group of scientists from the Institute of Nuclear Physics of the Polish Academy of Sciences (IFJ PAN) in Cracow, led by Dr. Jakub Szlachetko, working on the Solaris synchrotron, has managed to shed some light on the details of the oxidation processes of the outer layers of titanium samples and the related changes in the electronic structure of the material. The research on titanium dioxide inaugurated the presence of IFJ PAN scientists in the research programs carried out on the SOLARIS synchrotron. The device, operating as part of the National Synchrotron Radiation Centre, is situated in Cracow on the campus of the 600th anniversary of the Jagiellonian University.

Synchrotron radiation was discovered in 1947, when General Electric launched an accelerator that curved the path of accelerated electrons with the use of magnets. The particles would then start emitting light randomly, so they lost energy – whereas they were supposed to gain it! Synchrotron radiation was therefore considered an undesirable effect. Only thanks to successive generations of synchrotron radiation sources were light beams with higher intensities and better quality of emitted light achieved, including high repeatability of pulses with practically always the same characteristics.

The SOLARIS synchrotron, the largest and most modern device of this type in Central Europe, consists of two main parts. The first is a 40 m long linear electron accelerator. Particles gain energies of 600 megaelectronvolts here, after which they reach the second part of the apparatus – the interior of an accumulation ring with a circumference of 96 m, where curving magnets, wigglers and undulators are placed in their path. These are sets of alternately oriented magnets, inside which the shape of the electron path begins to resemble a sinusoid. It is then that the “wobbling” electrons emit synchrotron radiation, directed to the appropriate end stations with measuring equipment. The electromagnetic waves produced by SOLARIS are classified as soft X-rays.

The unique features of synchrotron radiation have many applications: they assist in the development of new materials, track the course of chemical reactions and make it possible to conduct experiments useful for the development of nanotechnology, microbiology, medicine, pharmacology and many other fields of science and technology.

„Research on the SOLARIS synchrotron opens up entirely new possibilities, so it is no wonder that many research groups from Poland and throughout the world apply for beamtime here. Although our Institute – just like the SOLARIS synchrotron – is located in Cracow, like everyone we competed in terms of research quality for beamtime at the appropriate measurement station”, says Prof. Wojciech M. Kwiatek, head of the Division of Interdisciplinary Research at the IFJ PAN and President of the Polish Synchrotron Radiation Society. Prof. Kwiatek notes that in an era of travel restrictions caused by the development of the pandemic, the possibility of conducting advanced physical examinations practically on site is a huge advantage.

Researchers from the IFJ PAN conducted their latest measurements, co-financed by the Polish National Science Centre, at the XAS experimental station. It records how X-rays are absorbed by the surface layers of titanium samples previously produced at the Institute under carefully controlled conditions.

„We focused on observations of the changes in the electronic structure of the surface layers of samples depending on changes in temperature and progress of the oxidation process. For this purpose, we heated titanium discs at different temperatures and ambient atmospheres. After being transported to the synchrotron experimental station, the samples were illuminated with synchrotron radiation, i.e. X-rays. Since the properties of synchrotron radiation are well known, we were able to use it to precisely determine the structure of unoccupied electronic states of titanium atoms and on this basis make conclusions about changes in the structure of the material”, says PhD student Klaudia Wojtaszek (IFJ PAN), the first author of the article published in the Journal of Physical Chemistry A.

Titanium dioxide occurs in three polymorphic forms, characterized by different crystallographic structures. The most popular is rutile, a mineral that is common in many rocks (the other varieties are anatase and brookite). Research on the SOLARIS synchrotron allowed the physicists from Cracow to precisely recreate the process of forming the rutile phase. It turned out that it is formed at lower temperatures than previously thought.

„Our research provides fundamental knowledge about the structure of the material. However, this structure is closely related to the physico-chemical properties of the titanium dioxide surface. Potentially, our results can therefore be used, for example, to optimize the surface characteristics of medical implants”, concludes Dr. Anna Wach, who was responsible for the conduction of experiment at SOLARIS synchrotron. 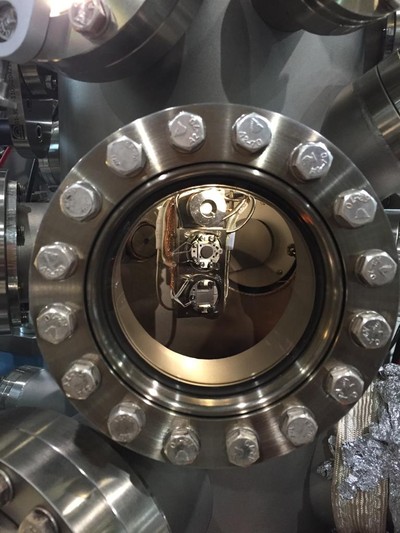 Interior of the measurement chamber at the XAS research station of the Cracow synchrotron SOLARIS. (Source: IFJ PAN)