HAWC: Are photons of extreme energies coming from the Galaxy's largest accelerator? 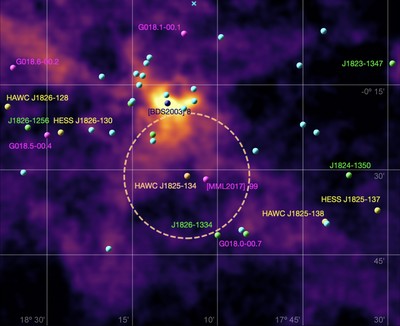 Photons with an energy of 200 teraelectronvolts are most likely emitted by protons colliding with interstellar gas. The primary source of protons is pulsar HAWC J1825-134 (in the orange circle), the role of the actual accelerator is played by the star cluster [BDS2003] 8 (dark blue). (Source: HAWC)

For years, in the vastness of our galaxy, astrophysicists have been tracking down pevatrons – natural accelerators of particles with monstrous energies. Thanks to the HAWC Observatory for Cosmic Radiation, another probable trace of their existence has just been found: photons with some of the highest energies. However, what is particularly important is that this time the high-energy photons have not only been recorded, but also their probable place of origin has been determined.

We know they exist, we just don't know where exactly they are or what they look like. Pevatrons – because this is what we are talking about here – are the largest natural particle accelerators in our galaxy, capable of accelerating protons and electrons to energies even many billions of times greater than the energy of photons of visible light. The problem with detecting pevatrons stems from the fact that the particles they accelerate carry an electric charge and are therefore deflected by magnetic fields in the galaxy. The discovery which has just been made thanks to data collected by the High-Altitude Water Cherenkov (HAWC) Gamma-Ray Observatory brings us significantly closer to finding the first cosmic pevatron and understanding its nature.

The HAWC Observatory is located on the slope of the Sierra Negra volcano in Mexico, at an altitude of 4,100 m. It consists of 300 water tanks, each surrounded by sensitive photomultipliers. When a particle of secondary cosmic radiation travelling at a speed faster than the speed of light in water enters a tank, there is an electromagnetic “boom” – a weak flash of radiation (Cherenkov), detected and amplified by the photomultipliers. A careful analysis of flashes observed at the same time in individual tanks makes it possible to extract information about the type, energy and direction of the particle of the primary cosmic radiation which initiated the recorded cascade of secondary particles.

„Based on data collected by the HAWC, we were able to determine the source of photons with energies of about 200 teraelectronvolts. For photons, this is an extreme value, one hundred trillion times greater than the energy typical of photons perceived by our eyes”, says Dr. Sabrina Casanova from the Institute of Nuclear Physics of the Polish Academy of Sciences (IFJ PAN) in Cracow. Together with Dr. Francisco Sales Greus (IFJ PAN & IFIC) and PhD student Dezhi Huang from the Michigan Technological University in Houghton (USA), she is one of the main authors of the analysis published in the excellent astronomical journal The Astrophysical Journal Letters.

Compared to protons and electrons, photons have a pleasant feature: they ignore magnetic fields and run to their target along the shortest path that space-time allows. So, once the direction from which the photons are coming is identified within a galaxy, it is usually possible to determine their source. This is not an easy task, but in this case it was successful. The source of the 200 TeV photons turned out to be a region of the recently discovered pulsar eHWC J1825-134, visible in the southern hemisphere in the background of the Vela constellation, and lying at a distance of about 13 thousand light years from Earth.

Observations of such high-energy photons are rare, and it is even rarer to identify the source. The record currently belongs to photons with energies of 450 TeV, detected with the Sino-Japanese ASgamma detector in Tibet. In that case, the photons came from the vicinity of a pulsar in the famous Crab nebula in the background of the Taurus constellation.

„We now know of two mechanisms that can explain the existence of photons with energies of 200 TeV and above”, explains Dr Salesa Greus, before elaborating: „According to the first, the source of such energetic photons could be electrons with slightly higher energies, emitted by supernova remnants or pulsars and then interacting with the microwave background radiation filling the Universe. This case seems to fit the Crab nebula. The second variant of the course of events assumes that photons are born due to the interaction of protons emitted by a pulsar with matter in interstellar space. What is particularly interesting in this scenario is that the energies of the protons must be at least an order of magnitude greater than the energies of the observed photons!”.

The region of the eHWC J1825-134 pulsar is a complex astronomical structure with several sources of high-energy gamma rays within it. HAWC researchers have determined that the origin of the 200 TeV photons was not the pulsar itself, but a previously unknown source: a nearby cloud of interstellar material. It surrounds a young cluster of stars, about one million years old, designated as [BDS2003] 8. The observed photons could thus have been emitted by protons from the eHWC J1825-134 pulsar which, within the [BDS2003] 8 star cluster, had enough time to accelerate in the local magnetic field to energies of a few petaelectronvolts and produce energetic photons in the interaction with the cloud. If this variant of the course of events is confirmed in subsequent observations, we would be dealing with the first pevatron identified in our galaxy.

„For the time being, we have too little data to unambiguously decide on the nature of the cosmic accelerator responsible for the generation of 200 TeV photons in the region of eHWC J1825-134. If, however, there is a galactic pevatron hiding somewhere, we have managed to find a really excellent candidate”, notes Dr. Casanova.

The research of scientists from the IFJ PAN was funded by a grant from the Polish National Sci - ence Centre.

Photons with an energy of 200 teraelectronvolts are most likely emitted by protons colliding with interstellar gas. The primary source of protons is pulsar HAWC J1825-134 (in the orange circle), the role of the actual accelerator is played by the star cluster [BDS2003] 8 (dark blue). (Source: HAWC)