An innovative catalyst with Pt, Re and SnO2 nanoparticles as anode material in ethanol fuel cells 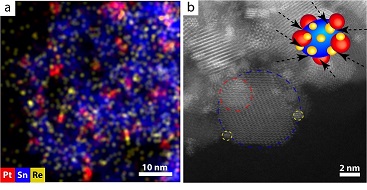 Scientists working at the Department for Functional Nanomaterials at the Institute of Nuclear Physics of the Polish Academy of Sciences designed and synthesized a functional ternary Pt/Re/SnO2/C catalyst as an anode material in a direct ethanol fuel cell. It was possible by synthesizing platinum, rhenium and tin oxide nanoparticles of a spherical shape and ensuring physical contact between them. This finding will lead to the production of more efficient, greener and cheaper fuel cell catalysts.

One of the biggest challenges modern science faces today is the development of new, efficient and environmentally friendly technologies for converting chemical energy into electricity. Ethanol fuel cells are becoming such an alternative source of energy. Ethanol seems to be the ideal fuel of the future, because, compared to methanol or hydrogen, it has significantly lower toxicity, poses no problems or threats in storage and transport, and can also be obtained from biomass. However, the catalysts used in direct ethanol fuel cells (DEFCs) are not sufficiently effective and mainly produce by-products instead of the expected ethanol final product, such as carbon dioxide. These substances strongly adsorb on the surface of platinum, which is the most commonly used catalyst. As a result, they block the catalytically active sites preventing a further reaction, thus causing so-called catalyst poisoning and lowering the overall efficiency of the device. Therefore, the key challenge is to develop the appropriate type of catalysts.

Platinum and platinum-based catalysts are widely used in DEFCs. Ethanol adsorption occurs on the platinum surface, which triggers its oxidation reaction (Ethanol Oxidation Reaction – EOR). Poisoning problems can be solved by adding other components to platinum, such as metallic rhodium and tin oxides, which improve the efficiency of the EOR because they play a unique and individual role in the ethanol oxidation pathway. The function of rhodium is to split the carbon-carbon bond in the ethanol molecule, while tin dioxide provides hydroxyl groups for oxidizing intermediates and helps unblock the inactive surface of platinum. In addition to rhodium and tin, elements such as Ru, Ir, Cu, Fe, Co, Ni and many others are also used. A ternary nanocatalyst containing platinum and rhodium nanoalloys deposited on tin oxide, which is currently considered one of the most efficient and selective configurations in the ethanol oxidation reaction, has also been extensively studied. It is also suggested that physical contact between nanoparticles plays a crucial role.

Scientists from the Department for Functional Nanomaterials at the Institute of Nuclear Physics of the Polish Academy of Sciences, led by Prof. Eng. Magdalena Parlińska-Wojtan, undertook the task of designing and synthesizing a new material, which could play the role of an anode catalyst. For this purpose, they decided to analyze the effect of rhenium, used as one of the three catalyst components, on improving the efficiency of the EOR. Moreover, the researchers assumed that by using intermolecular interactions and electrokinetic potential measurements, it would be possible to assemble the separately synthesized Pt, Re and SnO2 nanoparticles into double and triple combinations to ensure their physical contact. This assembling is possible due to the opposite values of the electrokinetic potential of each type of nanoparticles. While performing stability studies, the researchers also focused on the durability of the catalyst because the degradation of nanocatalyst components is a serious factor limiting the stability and commercialization of catalysts.

In the first stage of our work, we optimized the processes for obtaining individual nanoparticles: platinum, rhenium and tin oxide, which were intended to be the components of an anode catalyst, says Dr. Eng. Elżbieta Drzymała from IFJ PAN, the leading author of the scientific publication, describing the details of the conducted studies. Then, using intermolecular interactions, we put individually synthesized nanoparticles together to ensure physical contact between them. In this way, we obtained binary and ternary nanoparticle combinations, which were then deposited on carbon substrates with even distribution to provide ethanol molecules with the best access to active surfaces. The next step was to study the electrochemical properties of selected binary and ternary combinations given their potential use as anode material in ethanol fuel cells. Finally, we compared the results of our work with a commercial platinum catalyst.

The obtained results turned out to be very important and encouraged further research on this type of materials. The catalyst developed by the IFJ PAN group made of Pt, Re and SnO2 nanoparticles can be successfully used as an anode catalyst in DEFCs. Analyzes carried out with transmission electron microscopy (TEM) in combination with EDS spectroscopy confirmed the physical contact between the nanoparticles forming the ternary Pt/Re/SnO2/C catalyst (see figure). It has been experimentally proven by voltammetric techniques that this ternary catalyst exhibits more than ten times higher activity in the ethanol oxidation reaction compared to a commercial platinum catalyst. Besides, it has been shown that the Pt/Re/SnO2/C catalyst features the best stability – after testing, it preserved nearly 96 % of the electrochemically active surface (compared to 12 % for the commercial catalyst). It is also important that the ternary catalyst shows the lowest value of onset potential – the value of the initial oxidation potential is almost 0.3 V lower compared to a commercial platinum catalyst. Thus, the use of rhenium as the third component and connecting nanoparticles in such a way that they remain in physical contact generated the desired effect of improving the efficiency of the EOR.

Our further research will continue to focus on fuel cell catalysts, explains Dr. Eng. Drzymała. However, going a step further, we would like to solve the economic issues and develop a catalytic system with better or at least comparable properties but without the addition of platinum. I believe that the use of platinum-free nanoparticles decorated with small 2-nanometer SnO2 nanoparticles as components of such a catalyst will bring us closer to creating a fully functional material for the fuel cell anode. I hope that the catalyst without platinum will be synthesized soon at the Department for Functional Nanomaterials at the Institute of Nuclear Physics of the Polish Academy of Sciences.