Quantum rings in the hold of laser light 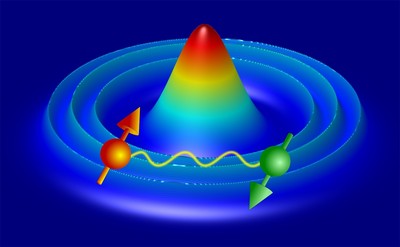 Ultracold atoms trapped in appropriately prepared optical traps can arrange themselves in surprisingly complex, hitherto unobserved structures, according to scientists from the Institute of Nuclear Physics of the Polish Academy of Sciences in Cracow. In line with their most recent predictions, matter in optical lattices should form tensile and inhomogeneous quantum rings in a controlled manner.

An optical lattice is a structure built of light, i.e. electromagnetic waves. Lasers play a key role in the construction of such lattices. Each laser generates an electromagnetic wave with strictly defined, constant parameters which can be almost arbitrary modified. When the laser beams are matched properly, it is possible to create a lattice with well know properties. By overlapping of waves, the minima of potential can be obtained, whose arrangement enables simulation of the systems and models well-known from solid states physics. The advantage of such prepared systems is the relatively simply way to modify positions of these minima, what in practice means the possibility of preparing various type of lattices.

“If we introduce appropriately selected atoms into an area of space that has been prepared in this way, they will congregate in the locations of potential minima. However, there is an important condition: the atoms must be cooled to ultra-low temperatures. Only then will their energy be small enough not to break out of the subtle prepared trap,” explains Dr. Andrzej Ptok from the Institute of Nuclear Physics of the Polish Academy of Sciences (IFJ PAN) in Cracow.

Structures formed by atoms (or groups of atoms) trapped in the optical lattice resemble crystals. Depending on the configuration of the laser beams, they can be one-, two- or three-dimensional. Unlike crystals, they are defect-free. What’s more, while in crystals the possibility of modifying the structure of the lattice is negligible, optical lattices are quite easy to configure. All that’s needed to change the properties of the laser light or the cutting angles of the beams. These features make optical lattices popular as quantum simulators. They can be used to reproduce various spatial configurations of atoms or groups of atoms, including even those that do not exist in nature.

In their research, the scientists from the IFJ PAN works with trapped atoms in optical lattices. Groups of fermions, i.e. atoms with spin of 1/2 (spin is a quantum feature describing the rotation of particles) were placed in their sites. In each site a certain number of atoms had the spin oriented in one direction (up), and the rest – in the opposite direction (down). Modification of interaction between atoms in such way to be attractive leads to creation of pairs of atoms, which correspond to the Cooper pairs in superconductors – pairs of electrons with opposite spins in the same site of lattice.

“The parameters of the optical lattice can be used to influence the interaction between atoms of different spin trapped in individual sites. Moreover, in such way a state can be prepared, which mimic applied external magnetic fields on the system. It is given by control the proportions between the numbers of atoms of different spin,” says Dr. Konrad J. Kapcia from IFJ PAN and notes that systems prepared in this way can reproduce the effects of relatively large magnetic fields without needing to use these fields. “This is possible because we know how a given magnetic field would impact into the difference between numbers of particles with opposite spins,” explains researchers.

According to the predictions of the Cracow-based physicists, an interesting phase separation should take place in systems prepared in this manner. As a result, core-shell structure formed by matter trapped in an optical lattice, a core of paired atoms of one phase, surrounded by a shell of paired atoms of the second phase, will automatically form.

“The whole situation can be represented by a tasty example. Imagine a plate of rice with a thick sauce. By proper preparation of the plate, we can affect the relative position between the rice and the sauce. For example, we can prepare system in such way, that the rice will be in the center, while the sauce forms a ring around it. From the same ingredients we can also construct the reverse system: in the middle of the plate there will be the sauce surrounded by a ring of the rice. In our case, the plate is the optical trap with atoms and their pairs, and the rice and sauce are the two phases, grouping different types of atom pairs”, Dr. Ptok describes.

The work of the physicists from IFJ PAN, published in Scientific Reports, is of a theoretical nature. Due to their simplicity, however, the described systems of ultracold atoms in optical traps can be quickly verified in laboratory experiments. Physicists from the IFJ PAN predicted that ultracold atoms trapped in optical lattices can form quantum rings with an inhomogeneous structure.