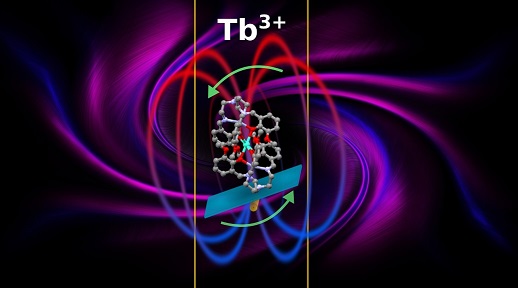 Scientists from IFJ PAN in cooperation with researchers from the Nara Women’s University (Japan) and the Jagiellonian University (Poland) took another important step towards building a functional quantum computer. Using material containing terbium ions and dedicated experimental tools, they performed a detailed analysis of dynamic magnetic properties in individual molecular magnets concerning their orientation in a magnetic field. Discovered strong anisotropy of these properties is vital in the construction of molecular electronics components.

One of the biggest challenges faced by modern science is to build an affordable and highly efficient quantum computer that will revolutionize the IT industry. Today, various solutions are sought that could lead to the construction of such a device. These include superconducting systems, quantum dots and photons in the resonance cavity. Intensive research is also carried out on the use of molecular magnets made of single molecules of 1 nm in size (SMM – Single Molecular Magnets). For this purpose, however, scientists not only need to find materials with the right characteristics but also thoroughly understand the behavior of magnetic molecules. One of the key research directions in this area focuses on the dynamics of magnetic properties. These so-called magnetic relaxations tell us how the magnetic properties of a given substance change over time. In the quantum world, such dynamics is an abundant and complicated phenomenon, which is why researchers carefully examine its various aspects.

So far, extensive studies have revealed the possibility of using molecular magnets to create memory cells or a spin transistor. Scientists are also able to place individual molecules on a suitable substrate and use them to build simple electronic systems. Measurements confirm that magnetic relaxations play a vital role in the operation of molecular systems. On the other hand, it is known that the dynamics of magnetic properties depend on the anisotropy of static magnetic properties. However, in most previous studies, either the influence of the orientation of the examined molecule on its dynamic magnetic properties has not been tested, or it has been done only to a limited extent.

Accordingly, a team of scientists from the Institute of Nuclear Physics of the Polish Academy of Sciences led by Dr. Eng. Piotr Konieczny decided to investigate how the dynamic magnetic properties of individual molecular magnets change depending on the orientation of the molecules. Most of research work on magnetic relaxation deals with materials in the form of powder, i.e. chaotically oriented crystallites, or polycrystals, which makes it impossible to analyze how these properties change with the molecule orientation. The Polish group, therefore, decided to study a single crystal – a monocrystalline – in which all molecules were oriented in the same way. This starting point enabled scientists to look at the effects taking place in a single molecule. To do this, it was also necessary to build an appropriate experimental system that would allow studying magnetic relaxation depending on the orientation of the tested substance.

“We were looking for a material that meets the expected requirements, and in particular is characterized by strong magnetic anisotropy and can be synthesized as high-quality crystal. At the same time, we developed laboratory equipment for testing the angle dependence of magnetic dynamics using ac magnetic susceptibility,” explains Dr. Eng. Konieczny. “The specific crystal was found in Japan, in the laboratory of Prof. Takashi Kajiwara from the Nara Women's University. In the meantime, we tested various polymers that we intended to apply in the measurement system construction. We used plastic materials revealing the weakest magnetic signal and well tolerating low temperatures (2.0 K) to build a fully functional prototype of the device. The measurements confirmed our hypothesis: magnetic relaxation depends on the orientation of the molecule, and therefore shows anisotropy. We were surprised that this relationship was so strong. However, the theoretical analysis provides us with a quantitative explanation of the observed effect.”

The studies were carried out using a commercial SQUID magnetometer. To analyze magnetic dynamics in the range of 0.1–1000 Hz, it was necessary to use the ac magnetic susceptibility method. This technique is commonly adopted to study magnetic relaxation. The innovation was the use of the developed setup which enabled to analyze anisotropy of dynamic magnetic properties (i.e. magnetic relaxation). This dedicated system was built in IFJ PAN for the described investigations. It allows the crystal to rotate inside the magnetometer at very low temperatures (2 K), high magnetic fields (7 T) and in a wide frequency range of the electromagnetic field (from 0.1 Hz to 1500 Hz). The device was designed and constructed to eliminate the unwanted background signal. Hence, it is possible to study the magnetic dynamics of small crystals.

The examined material – a terbium ion molecular magnet – was synthesized and structurally tested by Prof. Kajiwara's group, while most of theoretical and experimental analyses were carried out at IFJ PAN. The studies have confirmed that magnetic molecules show anisotropy of dynamic magnetic properties. In the investigated molecule, which looks like a ship’s propeller, magnetic relaxation rate is four times greater when rotated 80 degrees.

The described research work allows scientists to learn how magnetic relaxation in individual molecules can change depending on their orientation. This knowledge will be applied for designing molecular systems used in spintronic applications and quantum computers. Now it is known that the orientation of molecules has a significant impact on the operation of such systems. Scientists also managed to build an experimental device that would allow more detailed studies of the magnetic dynamics of materials.

“Our work helps us to better understand the behavior of individual magnetic molecules," says Dr. Eng. Konieczny. "Now we know that the orientation of molecules plays an important role in molecular electronics, for example, a molecular transistor. The random orientation of the molecules will cause chaotic operation of electronic or spintronic systems. The identical arrangement of the particles, however, will ensure their smooth interaction and better control.”

The results obtained by scientists from IFJ PAN are particularly important for engineers designing and building new generation electronic systems with magnetic molecules. “Our further research will continue to focus on the dynamic magnetic properties of molecular magnets,” concludes Dr. Eng. Konieczny. “We believe that a profound knowledge of the phenomena occurring in these materials will bring us closer to creating a fully functional molecular quantum computer.”