Convenient location of a near-threshold proton-emitting resonance in 11B 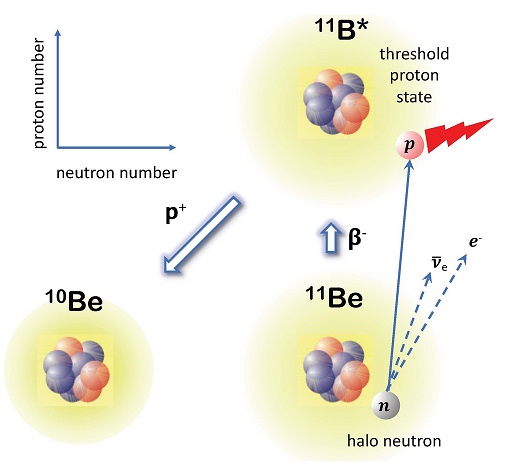 The ß-delayed proton emission of 11Be. The neutron halo ground state of 11Be undergoes beta decay to an excited state of 10B, which lies just above the proton-decay threshold. This state subsequently decays to 10Be by emitting a proton. (Source: IFJ PAN)

Polish scientists working in Poland, France and USA explained the mysterious β-delayed proton decay of the neutron halo ground state of 11Be. Studies within the SMEC model suggest the existence of collective resonance, carrying many characteristics of a nearby proton-decay channel, which explains this puzzling decay. It was argued that the appearance of such near-threshold resonant states is a generic phenomenon in any open quantum system, in which bound and unbound states strongly mix.

Nuclear clustering is one of the most puzzling phenomena in subatomic physics. Numerous examples of such structures include the ground state of the 11Li nucleus with a halo of two neutrons or the famous Hoyle resonance at 12C, which plays a vital role in the synthesis of heavier elements in stars. Narrow resonances near the threshold are fundamental in astrophysical conditions, in which most reactions occur at very low energies. For these states, particle emission channels can effectively compete with other types of decay, such as photon emissions. The widespread presence of narrow resonances near the particle emission threshold suggests that this is a universal phenomenon in open quantum systems in which bound and unbound states strongly mix, resulting in the appearance of a collective state with the features of a nearby decay channel.

In a recently published paper (Physical Review Letters 124, 042504 (2020)), physicists from the IFJ PAN in Krakow (Poland), GANIL in Caen (France) and FRIB Facility (USA) provided an explanation for proton emission delayed by ß– decay from the weakly bound ground state of the 11Be nucleus. In the first stage of this enigmatic, two-stage process, the neutron in the ground state of 11Be with the halo structure decays into electron, anti-neutrino and proton, causing the transformation of 11Be ground state into the resonance in 11B. In the second stage, a proton is emitted from this resonance (see attached diagram) to the 10Be state. The possibility of such a halo decay process in 11Be has been explained by the existence of resonance in 11B with 1/2+ total angular momentum and parity, which resembles many features of a nearby proton emission channel. The proximity of proton and tritium emission thresholds in 11B suggests that this resonance may also contain an admixture of the tritium cluster configuration.

“The study was carried out based on the shell model embedded in the continuum (SMEC). The measure of state collectivization near the threshold for particle emissions (nucleon, deuteron, α particle, etc.) is the correlation energy, which is calculated for each eigenstate of the SMEC. Competing effects determine the excitation energy at maximum collectivization: coupling to decay channels and the Coulomb and centrifugal barriers. For higher angular momentum values (L > 1) and/or for coupling to the charged particle emission channel, the correlation energy extremum is above the threshold energy of this channel,” explains Prof. Jacek Okołowicz from the Institute of Nuclear Physics of the Polish Academy of Sciences.

In the latest experimental work of the group at Michigan State University, proton emission was observed in 11B from a state with a total angular momentum of 1/2+ or 3/2+, the energy of 11.425(20) MeV and a width of 12(5) keV, which is populated in the ß– decay of 11Be ground state. The resonance at 11B proposed in this experiment is 197(20) keV above the threshold for proton emission and 29(20) keV below the threshold for neutron emission.

Theoretical studies using the SMEC model include the effective nucleon-nucleon interaction in discrete states of the shell model, and the Wigner-Bartlett interaction describing the coupling between nucleons in discrete bound states and continuum states. The calculations were made for the Jπ = 1/2+ and 3/2+ states in 11B to determine the most likely angular momentum of the proposed resonance. The shell model states are mixed via coupling with a proton and neutron reaction channels. Collectivization of the wave function was found only for the third excited 1/2+ state, for which the maximum correlation energy lies 142 keV above the proton emission threshold. Hence, it was concluded that the resonance in 11B, mediating in the decay of the ground state of 11Be, must have a total angular momentum and parity Jπ = 1/2+.

“We investigated the puzzling case of β–p+ decay of 11Be with a neutron halo. Analysis carried out within the SMEC model confirms the existence of collective resonance in 11B near the proton emission threshold and favors assignment of Jπ = 1/2+ quantum numbers. The wave function of this resonance resembles a nearby proton emission channel. It means that in this process β– decay can be interpreted as quasi-free decay of a neutron from the 11Be halo to resonance in 11B, in which a single proton is coupled with the 10Be core. The similarity of Jπ = 1/2+ resonance to the channel [10Be + p] also explains the large spectroscopic factor for proton decay and the very small partial width of the α decay of this state. However, the properties of the nearby Jπ = 3/2+ state, which mainly decays by the emission of the α particle, can be explained by the fourth 3/2+ state of the SMEC model. This state poorly couples to the emission channels of one neutron or proton. Above the neutron emission threshold [10B + n] is a 5/2+ resonance, which is crucial for 10B neutron capture. The wave function of the sixth 5/2+ state of the SMEC model shows very strong collectivization near the threshold of neutron emission, which is the explanation of the huge observed cross-section for neutron capture by 10B,” says Prof. Okołowicz.

The reason for the emergence of a collective proton (neutron) resonance around the proton (neutron) emission threshold is the L=0 (L=2) coupling with the proton (neutron) scattering state space. In this regard, the 11B case follows other splendid examples of threshold states in 12C, 11Li, or 15F. In the future, experimental studies of the 10Be(p,p)10Be reaction will be needed to understand the nature of proton resonance at 11.425 MeV. To better figure out the nature of the neutron reaction channel and neighboring neutron resonances, 10B(d,p)11Be reactions need to be examined. Besides, an extensive experimental and theoretical analysis will be required to determine the branching ratio for the β–p+ channel, as the currently suggested experimental value is greater by a factor of 2 than the predictions of the SMEC model. Future theoretical studies should also explain the effect of L=0 virtual neutron state on the reaction channel [10B + n].

The ß-delayed proton emission of 11Be. The neutron halo ground state of 11Be undergoes beta decay to an excited state of 10B, which lies just above the proton-decay threshold. This state subsequently decays to 10Be by emitting a proton. (Source: IFJ PAN)