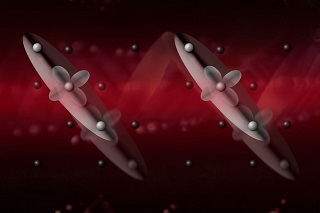 Illustration of the newly discovered charge fluctuations in the trimeron order of magnetite triggered by a laser beam. (Source: Ambra Garlaschelli and MIT)

An international team of scientists uncovered exotic quantum properties hidden in magnetite, the oldest magnetic material known to mankind. The study reveals the existence of low-energy waves that indicate the important role of electronic interactions with the crystal lattice. This is another step to fully understand the metal-insulator phase transition mechanism in magnetite, and in particular to learn about the dynamical properties and critical behavior of this material in the vicinity of the transition temperature.

Magnetite (FeO4) is a common mineral, whose strong magnetic properties were already known in ancient Greece. Initially, it was used mainly in compasses, and later in many other devices, such as data recording tools. It is also widely applied to catalytic processes. Even animals benefit from the properties of magnetite in detecting magnetic fields – for example, birds are known to use it in navigation.

Physicists are also very interested in magnetite because around a temperature of 125 K it shows an exotic phase transition, named after the Dutch chemist Verwey. This Verwey transition was also the first phase metal-to-insulator transformation observed historically. During this extremely complex process, the electrical conductivity changes by as much as two orders of magnitude and a rearrangement of the crystal structure takes place. Verwey proposed a transformation mechanism based on the location of electrons on iron ions, which leads to the appearance of a periodic spatial distribution of Fe2+ and Fe3+ charges at low temperatures.

In recent years, structural studies and advanced calculations have confirmed the Verwey hypothesis, while revealing a much more complex pattern of charge distribution (16 non-equivalent positions of iron atoms) and proving the existence of orbital order. The fundamental components of this charge-orbital ordering are polarons – quasiparticles formed as a result of a local deformation of the crystal lattice caused by the electrostatic interaction of a charged particle (electron or hole) moving in the crystal. In the case of magnetite, the polarons take the form of trimerons, complexes made of three iron ions, where the inner atom has more electrons than the two outer atoms.

The new study, published in the journal Nature Physics, was carried out by scientists from many leading research centers around the world. Its purpose was to experimentally uncover the excitations involved in the charge-orbital order of magnetite and describe them by means of advanced theoretical methods. The experimental part was performed at MIT (Edoardo Baldini, Carina Belvin, Ilkem Ozge Ozel, Nuh Gedik); magnetite samples were synthesized at the AGH University of Science and Technology (Andrzej Kozłowski); and the theoretical analyses were carried out in several places: the Institute of Nuclear Physics of the Polish Academy of Sciences (Przemysław Piekarz, Krzysztof Parlinski), the Jagiellonian University and the Max Planck Institute (Andrzej M. Oleś), the University of Rome “La Sapienza” (José Lorenzana), Northeastern University (Gregory Fiete), the University of Texas at Austin (Martin Rodriguez-Vega), and the Technical University in Ostrava (Dominik Legut).

“At the Institute of Nuclear Physics of the Polish Academy of Sciences, we have been conducting studies on magnetite for many years, using the first-principles calculation method,” explains Prof. Przemysław Piekarz. “These studies have indicated that the strong interaction of electrons with lattice vibrations (phonons) plays an important role in the Verwey transition.”

The scientists at MIT measured the optical response of magnetite in the extreme infrared for several temperatures. Then, they illuminated the crystal with an ultrashort laser pulse (pump beam) and measured the change in the far-infrared absorption with a delayed probe pulse. “This is a powerful optical technique that enabled us to take a closer view at the ultrafast phenomena governing the quantum world,” says Prof. Nuh Gedik, head of the research group at MIT.

The measurements revealed the existence of low-energy excitations of the trimeron order, which correspond to charge oscillations coupled to a lattice deformation. The energy of two coherent modes decreases to zero when approaching the Verwey transition – indicating their critical behavior near this transformation. Advanced theoretical models allowed them to describe the newly-discovered excitations as a coherent tunneling of polarons. The energy barrier for the tunneling process and other model parameters were calculated using density functional theory (DFT), based on the quantum-mechanical description of molecules and crystals. The involvement of these waves in the Verwey transition was confirmed using the Ginzburg-Landau model. Finally, the calculations also ruled out other possible explanations for the observed phenomenon, including conventional phonons and orbital excitations.

“The discovery of these waves is of key importance for understanding the properties of magnetite at low temperatures and the Verwey transition mechanism,” say Dr. Edoardo Baldini and Ms. Carina Belvin of MIT, the lead authors of the article. “In a broader context, these results reveal that the combination of ultrafast optical methods and state-of-the-art calculations makes it possible to study quantum materials hosting exotic phases of matter with charge and orbital order.”

The obtained results lead to several important conclusions. First, the trimeron order in magnetite has elementary excitations with a very low energy, absorbing radiation in the far-infrared region of the electromagnetic spectrum. Second, these excitations are collective fluctuations of charge and lattice deformations that exhibit critical behavior and are thus involved in the Verwey transition. Finally, the results shed new light on the cooperative mechanism and dynamical properties that lie at the origin of this complex phase transition.

“As for the plans for the future of our team, as part of the next stages of work we intend to focus on conducting theoretical calculations aimed at better understanding the observed coupled electronic-structural waves,” concludes Prof. Piekarz.

Illustration of the newly discovered charge fluctuations in the trimeron order of magnetite triggered by a laser beam. (Source: Ambra Garlaschelli and MIT)