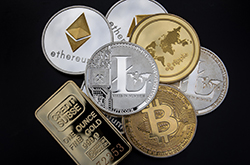 Cryptocurrencies are becoming a serious and full-fledged financial instrument. (Source: WorldSpectrum via Pixabay)

Cryptocurrencies have been treated as a financial terra incognita - they enjoyed growing interest but also raised concerns due to their virtuality. The use of statistical methods utilizing correlation matrices to analyze the hundred most-traded virtual currencies shows that the cryptocurrency market in the last two years is less and less different from the mature global currency market (Forex) and becomes independent of it. It means cryptocurrencies can be considered a serious and full-fledged financial instrument.

The concept of cryptocurrency has settled in general public for some time. This financial instrument has both enthusiastic supporters and implacable opponents. What does this term mean? Simply put, a cryptocurrency is a digital or virtual means of payment that exists only in a computer system and therefore has no physical equivalents in the form of banknotes or coins. More technically, it is a type of decentralized register consisting of independent devices, based on blockchain technology, using cryptographic solutions and storing assets information in contractual units. All transactions carried out in the world of cryptocurrencies are anonymous, but each of them is publicly available.

Cryptocurrencies have emerged relatively recently. The first of them - Bitcoin - was proposed in 2008 by a person or group of people nicknamed Satoshi Nakamoto. This event coincided with the epicenter of the global financial crisis. According to its creators, the Bitcoin was supposed to provide a tool for transactions via the Internet without the participation of a monetary authority - the central bank in the case of standard currency. The first transaction using bitcoins - the purchase of 2 pizzas for a nowadays staggering amount of 10,000 bitcoins - was made in 2010. In the same year, the first Bitcoin exchange market started its operation. Since then, there has been a spectacular development of the cryptocurrency market up to a level reaching a peak capitalization of 800 billion USD. Currently, about 5200 virtual currencies, in particular Bitcoin (BTC), Ethereum (ETH) and Ripple (XRP), are traded on various exchange markets.

The cryptocurrency market is unique in terms of research capabilities due to its spectacular development in a reasonably short period and almost unlimited data availability. This allows statistical analyses to be carried out at various stages of development and to track its evolution and trends. These studies are conducted by a team of scientists led by Professor Stanisław Drożdż from the Institute of Nuclear Physics of the Polish Academy of Sciences in Kraków and the Cracow University of Technology. The group decided to tackle the problem of the existence of dependencies and their evolution within a basket of 100 virtual currencies representing about 95% of the capitalization of the entire cryptocurrency market, taking into account 1278 days from 1 October 2015 to 31 March 2019.

In their studies, based on previous analyzes, researchers used correlation matrix formalism derived from statistical physics. In general, calculations with such matrices make it possible to determine if a particular pattern exists in the data set. An example of a perfect two-dimensional correlation is a straight line, and the complete lack of it is symbolized by points scattered randomly on the plane. The determinant of the correlation matrix is a measure of collinearity, i.e. the compliance of variables representing the system. The closer it is to 1, the lower the degree of interdependence of these variables, while the closer to 0, the more significant the correlation. The research focused on the distribution of matrix elements and deviations of the distribution of eigenvalues of the correlation matrix from the so-called Wishart model distribution for random matrices, which corresponds to the situation of a complete lack of correlations.

It turned out that the value of the main eigenvalue, which indicates the degree of correlation, significantly depends on the choice of the base currency - says the co-author of the article Marcin Wątorek. In general, the base currency is the more important concerning the market value, the smaller the eigenvalue (which, however, must be higher than the values generated for a random background). This is a very important result for assessing the role of a specific cryptocurrency on the global market of these financial instruments.

Researchers conducted analyses comparing the characteristics of the exchange rate fluctuations of cryptocurrencies in relation to each other, to the USD exchange rate and the so-called fictitious currency, artificially generated from a random distribution, introduced as a reference for research purposes. The results obtained for the cryptocurrency market are similar to the corresponding measurements from the stock and traditional currency market - for example, the Forex market. This similarity applies both to the variability dynamics of applicable exchange rates and the fact that the dominant feature of this dynamics is behaviour indistinguishable from chaos. In the initial phase of the analyzed period, it was the USD and Bitcoin that played the role of the main base currencies for cryptocurrency trading. While approaching today, one can observe gradual independence of the virtual currency market from USD. Currently, only Bitcoin is the natural base currency for other cryptocurrencies.

Furthermore, starting from mid-2017, the correlation patterns of exchange rate fluctuations of cryptocurrencies expressed in USD are beginning to imitate more clearly the models generated in a situation when these rates are shown in a fictitious currency whose variability is entirely random, and therefore independent of the cryptocurrency market. At the same time, historically the first and strongest cryptocurrency — Bitcoin and also Ethereum, turn out to be, among virtual currencies, the USD and EUR equivalents of the Forex market. These results indicate that cryptocurrencies are becoming a fully mature, integral, self-contained and independent of the Forex market, and therefore an alternative to it. It seems that we are just witnessing the finalization of the transformation from paper to digital civilization.

Our research on internal correlations on the cryptocurrency market indicates that this market has reached the level of maturity allowing it to be treated as equivalent to regular financial markets, and in particular the global currency exchange market, which is Forex - explains Stanisław Drożdż. We witness the emergence of an integrated and independent market in which cryptocurrencies are exchanged with each other without the need to use, for example, the USD, as was the case in the initial phase of cryptocurrency trading.

The work of the Kraków team has shown that despite existing economic connections, cryptocurrencies cease to be significantly correlated with traditional financial instruments such as currencies, stock markets or commodities. Apart from being a new medium of brokerage in trade - an alternative to traditional currencies - they create new possibilities for diversifying investment portfolios. The described analyses certainly have the potential to reduce the degree of distrust of investors towards this visionary and futuristic financial instrument.

Cryptocurrencies are becoming a serious and full-fledged financial instrument. (Source: WorldSpectrum via Pixabay)