Entanglement by identity, or interaction without ever touching 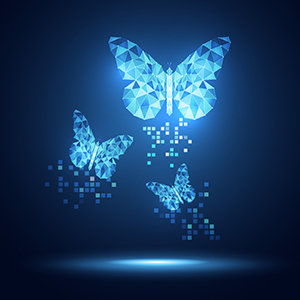 Identity of particles entails their entanglement, which can also be observed in pure form without interaction. (Source: Shutter2U/Vecteezy)

What is interaction and when does it occur? Intuition suggests that the necessary condition for the interaction of independently created particles is their direct touch or contact through physical force carriers. In quantum mechanics, the result of the interaction is entanglement—the appearance of non-classical correlations in the system. It seems that quantum theory allows entanglement of independent particles without any contact. The fundamental identity of particles of the same kind is responsible for this phenomenon.

“The whole is other than the sum of its parts.” – Aristotle (Metaphysics, Book VIII)

Quantum mechanics is currently the best and the most accurate and sophisticated theory used by physicists to describe the world around us. Its characteristic feature, however, is the abstract mathematical language notoriously leading to serious interpretational problems. The view of reality proposed by this theory is still a subject of scientific dispute, which, instead of expiring over time, is becoming hotter and more interesting. The new motivation and intriguing questions are brought forth by a fresh perspective resulting from the standpoint of quantum information and the enormous progress of experimental techniques. This allows verification of the conclusions drawn from subtle thought experiments directly related to the problem of interpretation. Moreover, we are now witnessing enormous progress in the field of quantum communication and quantum computer technology, which significantly draws on non-classical resources offered by quantum mechanics.

The work by Paweł Błasiak from the Institute of Nuclear Physics of the Polish Academy of Sciences in Kraków and Marcin Markiewicz from the University of Gdańsk focus on analyzing widely accepted paradigms and theoretical concepts regarding the basics and interpretation of quantum mechanics. The researchers are trying to answer the question to what extent the intuitions used to describe quantum mechanical processes are justified in a realistic view of the world. For this purpose, they try to clarify specific theoretical ideas, often functioning in the form of vague intuitions, using the language of mathematics. This approach often results in the appearance of inspiring paradoxes. Of course, the more basic the concept to which a given paradox relates, the better, because it opens up new doors to deeper understanding a given problem.

In this spirit, both scientists decided to ponder the fundamental question: what is interaction and when does it occur? In quantum mechanics, the result of the interaction is entanglement, which is the appearance of non-classical correlations in the system. Imagine two particles created independently in distant galaxies. It would seem that a necessary condition for the emergence of entanglement is the requirement that at some point in their evolution the particles touch one another or, at least, indirect contact should take place through another particle or physical field to convey the interaction. How else can they establish this mysterious bond, which is quantum entanglement? Paradoxically, however, it turns out that this is possible. Quantum mechanics allows entanglement to occur without the need for any, even indirect, contact.

To justify such a surprising conclusion, a scheme should be presented in which the particles will show non-local correlations at a distance (in a Bell-type experiment). The subtlety of this approach is to exclude the possibility of an interaction understood as some form of contact along the way. Such a scheme should also be very economical, so it must exclude the presence of force carriers which could mediate this interaction (physical field or intermediate particles). Błasiak and Markiewicz showed how this can be done by starting from the original considerations of Yurke and Stoler, which they reinterpreted as a permutation of paths traversed by the particles from different sources. This new perspective allows generating any entangled states of two and three particles, avoiding any contact. The proposed approach can be easily extended to more particles.

How is it possible to entangle independent particles at a distance without their interaction? The hint is given by quantum mechanics itself, in which the identity—the fundamental indistinguishability of all particles of the same kind—is postulated. This means, for example, that all photons (as well as other families of elementary particles) in the entire Universe are the same, regardless of their distance. From a formal perspective, this boils down to symmetrization of the wave function for bosons or its antisymmetrization for fermions. Effects of particle identity are usually associated with their statistics having consequences for a description of interacting multi-particle systems (such as Bose-Einstein condensate or solid-state band theory). In the case of simpler systems, the direct result of particle identity is the Pauli exclusion principle for fermions or bunching in quantum optics for bosons. The common feature of all these effects is the contact of particles at one point in space, which follows the simple intuition of interaction (for example, in particle theory, this comes down to interaction vertices). Hence the belief that the consequences of symmetrization can only be observed in this way. However, interaction by its very nature causes entanglement. Therefore, it is unclear what causes the observed effects and non-classical correlations: is it an interaction in itself, or is it the inherent indistinguishability of particles? The scheme proposed by both scientists bypasses this difficulty, eliminating interaction that could occur through any contact. Hence the conclusion that non-classical correlations are a direct consequence of the postulate of particle identity. It follows that a way was found to purely activate entanglement from their fundamental indistinguishability.

This type of view, starting from questions about the basics of quantum mechanics, can be practically used to generate entangled states for quantum technologies. The article shows how to create any entangled state of two and three qubits, and these ideas are already implemented experimentally. It seems that the considered schemes can be successfully extended to create any entangled many-particle states. As part of further research, both scientists intend to analyze in detail the postulate of identical particles, both from the standpoint of theoretical interpretation and practical applications.

A big surprise may be the fact that the postulate of indistinguishability of particles is not only a formal mathematical procedure but in its pure form leads to the consequences observed in laboratories. Is nonlocality inherent in all identical particles in the Universe? The photon emitted by the monitor screen and the photon from the distant galaxy at the depths of the Universe seem to be entangled only by their identical nature. This is a great secret that science will soon face.

Identity of particles entails their entanglement, which can also be observed in pure form without interaction. (Source: Shutter2U/Vecteezy)