Randomness opens the gates to the land of attophotography 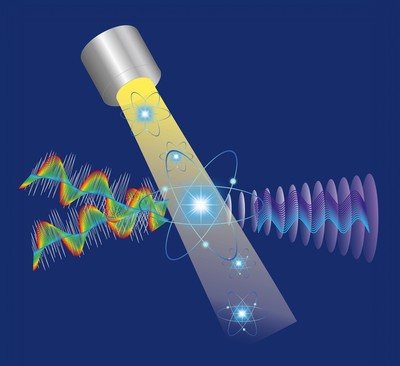 One of the last obstacles hindering the photography and filming of processes occurring on a scale of attoseconds, i.e. billionths of a billionth of a second, has disappeared. The key to its removal lies in the random nature of the processes responsible for the formation of X-ray laser pulses.

There are only a few X-ray lasers in the world today. These sophisticated devices can be used to record even extremely fast processes such as the changes in the electron states of atoms. The pulses generated by modern X-ray lasers are already short enough to be able to consider taking attophotos or even attofilms. However, what remained a problem was the X-ray optics itself. When an ultra-short X-ray pulse leaves the laser in which it was created, it can be extended in time over a dozen-fold. An international group of physicists under the supervision of Dr. Jakub Szlachetko and Dr. Joanna Czapla-Masztafiak from the Institute of Nuclear Physics of the Polish Academy of Sciences (IFJ PAN) in Cracow and Dr. Yves Kayser of the Physikalisch-Technische Bundesanstalt in Berlin has proved in Nature Communications that X-ray optics should no longer be an obstacle. The publication is the result of research conducted at the Linac Coherent Light Source (LCLS) Xray laser at the SLAC National Accelerator Laboratory in Menlo Park, California.

„The best way to get rid of problems with X-ray optics was... to get rid of X-ray optics”, laughs Dr. Szlachetko. „Instead of solving the problem, we found a way around it. It is interesting that we replaced the optics... by chance. Literally! We have shown that much better parameters than the current X-ray laser pulses can be obtained by skilful use of processes of a stochastic nature”.

It is not the first case in the history of X-ray lasers when physics itself comes to the aid of designers. In classical lasers, the key element is the optical resonator. This is a system of mirrors that only strengthens photons of a certain wavelength, moving in a certain direction. X-ray lasers were for a long time considered impossible to construct due to the lack of mirrors capable of reflecting X-rays. This obstacle was eliminated when it was noticed that the resonator could be replaced... with relativistic physics alone. When an electron accelerated to velocity close to the velocity of light passes along a system of many alternately oriented magnets, it does not move in a straight line, but moves around it, losing energy at the same time. Relativistic effects then force the electron to emit high-energy photons not in any random direction, but along the original course of the beam of electrons (hence the name: Free-Electron Laser – FEL).

The high hopes associated with X-ray lasers are due to the fact that they can be used to record chemical reactions. Each single laser pulse can provide information about the current electron state of the system being observed (atom or molecule). At the same time, the pulse energy is so high that immediately after recording the image, the illuminated objects cease to exist. Fortunately, the observation process can be repeated many times. The images collected during a longer session enable scientists to accurately reconstruct all the stages of the studied chemical reaction.

„The situation can be compared to attempts to photograph events of the same type with a flash camera. When we take enough photos of a sufficient number of the same events, we can use them to construct a film with high accuracy showing what happens during a single event”, explains Dr. Czapla-Masztafiak and explains: „The problem is that the pulses generated in X-ray lasers arise in spontaneous self-reinforcing stimulated emission and cannot be fully controlled”.

The spontaneous nature of the pulses means that in X-ray lasers the parameters of subsequent pulses are not exactly the same. The pulses appear once earlier, once later, they also differ slightly in the energy of photons and their number. In the presented analogy, this would correspond to a situation when subsequent photos are taken with different flash units, in addition, activated at random moments.

The inevitable randomness of X-ray pulses forced physicists to mount additional optical diagnostic equipment in FEL lasers. As a result, even if the laser generated an original pulse of attosecond duration, it was extended by X-ray optics to femtoseconds. Now it turns out that to record the electronic states of atoms or molecules in a manner that allows for reconstruction of chemical reactions, impulses with precisely controlled parameters are not needed.

„Removing X-ray optics also allowed us to use of extremely high-energy pulses to study non-linear effects. This means that atoms begin to be transparent to X-rays at some point, which in turn is associated with an increase in absorption in a different range of radiation”, explains Dr. Szlachetko.

The new method will be introduced in cooperation with IFJ PAN in experiments carried out using both current X-ray lasers: European XFEL near Hamburg (Germany) and SwissFEL in Villigen (Switzerland). The work related to testing the new technique in the context of chemical experiments was carried out in close cooperation with Dr. Jacinto Sa from the Institute of Physical Chemistry of the Polish Academy of Sciences in Warsaw and the University of Uppsala.

In the context of the proposed technique, it is worth emphasizing that in the case of classical optics there are some purely physical limitations related to the resolution of the optical instruments, for example the famous diffraction limit. There are no physical limitations in the new method – because there is no optics. So, if X-ray lasers appear with even shorter pulses than those currently generated, the new technique can be successfully used in them.