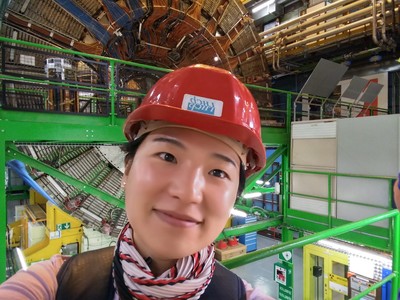 Dr. Jihyun Bhom from the Institute of Nuclear Physics of the Polish Academy of Sciences in Cracow against the background of the LHCb detector at CERN. (Source: IFJ PAN)

Electrons with ‘colleagues’ – other leptons – are one of many products of collisions observed in the LHCb experiment at the Large Hadron Collider. According to theorists, some of these particles may be created in processes that extend beyond standard physics. The latest analysis verifies these predictions.

Do the anomalies observed in the LHCb experiment in the decay of B mesons hide hitherto unknown particles from outside the currently valid and well-tested Standard Model? To answer this question, physicists are looking not only for further signs of the existence of new particles, but also for traces of the phenomena that may occur with them. One of the processes proposed by theoreticians going beyond the world of known physics is the breaking of the principle of preservation of the lepton flavour. This hypothetical phenomenon was in the centre of interest of an international group of researchers, which included representatives of the Institute of Nuclear Physics of the Polish Academy of Sciences (IFJ PAN) in Cracow, Technische Universität in Dortmund (TUD) and Centre National de la Recherche Scientifique (CNRS) in Paris. They paid particular attention to the analysis of data collected in 2011-12 during proton collisions as part of the LHCb experiment at the Large Hadron Collider at CERN near Geneva. Their results are discussed in the prestigious Physical Review Letters.

Thanks to decades of experiments and measurements carried out by nuclear physicists and cosmic ray researchers, it is known that particles of matter are divided into two completely independent families: quarks and leptons (with their anti-matter counterparts). Quarks (up, down, charm, strange, top and bottom) always appear in groups. Systems of two quarks are known as mesons, those made up of three quarks are baryons. The latter include protons and neutrons, the particles that make up atomic nuclei. In turn, leptons include electrons, muons, tau particles and their corresponding neutrinos.

“The properties of leptons and quarks differ fundamentally. As a result, both groups of particles are described using sets of different numbers, called quantum numbers. One of the quantum numbers used to describe leptons is the lepton number. For example, each electron has an electron number of 1. In turn, antimatter counterparts of electrons, i.e. positrons, have an electron number of -1”, explains Dr. Jihyun Bhom (IFJ PAN), the main author of the analysis. “That's how we come to the key phenomenon to explain the meaning of our work. Under the Standard Model, the principle of preserving the lepton number applies. It says that the sum of lepton numbers of particles at the beginning and end of the process must always be the same.”

The requirement to preserve the lepton number means that if, for example, two electrons with a total electron number of two participate in an interaction, at the end of the process this number will also be two. In the example presented, under the Standard Model it is possible to produce two electrons as well as four electrons and two positrons, and so on.

“In processes involving leptoquarks, lepton numbers do not be preserved. The detection of traces of phenomena where the principle of preserving the lepton number was violated would therefore be a significant step on the road to the detection of particles outside the Standard Model. In particular, it would make it easier for us to interpret the nature of the anomalies that have recently been more and more clearly visible in data from the decay of B mesons, i.e. particles containing the down quark and the bottom quark”, says Dr. Bhom.

In the latest statistical analyses it turned out necessary to use artificial intelligence – in addition, not just one.

“We were interested in the B meson decays leading to the formation of the K meson, a muon and an electron. However, it just so happens that under the Standard Model, a significant proportion of B meson decays lead to exactly the same products with addition of neutrinos (the latter cannot be recorded). This huge background had to be eliminated very precisely from the collected data. One artificial intelligence was responsible for this task. The second proved necessary to get rid of background residues that passed through the first”, explains Dr. Bhom.

Despite the use of sophisticated mathematical tools, the researchers from IFJ PAN, TUD and CNRS failed to detect traces of phenomena breaking the preservation of the lepton number. However, every cloud has a silver lining.

“With a certainty of up to 95% we've improved the existing restrictions on the solutions presented by theoreticians to explain the presence of anomalies in the decay of B mesons by a whole order of magnitude. As a result, we are the first to have significantly narrowed the area of searching for theories explaining the existence of these anomalies using new physics”, emphasizes Dr. Bhom.

If they do exist, processes that break the principle of preserving the lepton number obviously occur much less frequently than could be predicted by the most popular extensions of the Standard Model involving leptoquarks. What's more, anomalies in the decay of B mesons themselves do not have to be associated with new particles. The possibility can still not be excluded that they are artefacts of measurement techniques, the mathematical tools used or the result of not taking into account some phenomenon occurring within currently known physics. One can only hope that subsequent, already initiated analyses, taking into account the latest data collected at the LHC, will finally dispel doubts about the existence of physics beyond the Standard Model within a few years.

Dr. Jihyun Bhom from the Institute of Nuclear Physics of the Polish Academy of Sciences in Cracow against the background of the LHCb detector at CERN. (Source: IFJ PAN)