Theory reveals the nature of crystals defects (of silicon carbide) 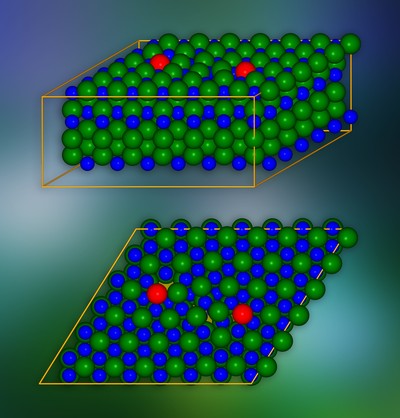 Silicon carbide crystal model with edge dislocations introduced in places marked in red. A single crystallographic plane is presented at the bottom. The places where electric charges can ‘leak’ to neighboring layers are marked in yellow. (Source: IFJ PAN)

Imperfections of crystal structure, especially edge dislocations of an elongated nature, deeply modify basic properties of the entire material and, in consequence, drastically limit its applications. Using silicon carbide as an example, physicists from Cracow and Warsaw have shown that even such computationally demanding defects can be successfully examined with atomic accuracy by means of a cleverly constructed, small in size, model.

Mathematics loves perfection. Unfortunately, perfection does not love physical reality. Theoreticians modelling crystals have long tried to include defects in real crystalline structures and predict their impact on the physical properties of materials. The models, based on the results of various experiments, have described changes in the basic properties of a material without explaining the real causes and effects of the occurring phenomena.

“We tried to find the mechanisms responsible at the atomic level for lowering the breakdown voltage in silicon carbide crystals. Our ab initio calculations lead to a qualitative understanding of the problem and contribute to explaining the details of this phenomenon”, says Dr. Jan Łażewski, professor at the IFJ PAN.

Ab initio calculations have now a long history related to Nobel Prize for Walter Kohn and John Pople in 1998 (however to linear crystal defect simulations they have only recently been introduced). This term is used to describe calculations carried out using quantum mechanics equations, supported only by knowledge about the structure of the atom and the symmetry of crystals. There is no direct information from experiments in such models, which means that they can also be used to analyse materials that have never been studied or even synthesized before. Because of relatively substantial complication of the issue, so far ab initio calculations worked, at most, in the case of point defects, related to vacancies (missing atoms or holes in the crystal structure) as well as admixtures introduced into the crystal.

It was not without reason that the Cracow researchers used silicon carbide. The properties of this semiconductor are so interesting that in the past it was even considered a successor to silicon. Its band gap (the barrier the charge has to overcome to get from the valence band to the conduction band and conduct current) is almost three times greater than in silicon, the permissible conduction current density – twice as great, the ability to dissipate heat – more than three times greater, and the cutoff frequency of crystal operation as many as six times greater. In addition, silicon carbide systems can operate at temperatures up to 650 degrees Celsius, while silicon systems already begin to have problems at 120 degrees Celsius. SiC also has a high melting point, it is hard, resistant to acid and radiation. Its disadvantages include above all the price: whilst two-inch silicon wafers cost only a few dollars, the value of similar silicon carbide wafers runs into thousands. Low quality silicon carbide crystals are a popular abrasive material, also used in bulletproof vests and in the brake discs of the world's most expensive cars, such as Lamborghini or Bugatti. High quality crystals are used to produce mirrors for telescopes and in high voltage devices with high resistance to temperature.

At the atomic level, silicon carbide crystals are composed of many flat layers arranged one on top of each other. Each layer resembles a honeycomb: it consists of hexagonal cells in which the silicon carbide molecules are located vertically in the corners. Each two adjacent layers can be combined in three ways. The multilayer ‘sandwiches’ with different layouts create so-called polytypes, of which there exist more than 250 in the case of silicon carbide. The group from IFJ PAN used the 4H-SiC polymorph.

“When modelling such structures, one of the main problems is computational complexity. A model of pure crystal, devoid of admixtures or dislocations, is characterized by high symmetry and can be calculated even in a few minutes. In order to carry out a calculation for a material with dislocation, we need months working on a high power computer”, emphasizes Dr. Paweł Jochym, professor at the IFJ PAN.

The problems with edge dislocations result from the scale of their influence on the crystal structure of the material. As an illustration, they can be compared to the problem of disguising a gap in a row of tiles on a floor. The gap can be ‘camouflaged’ by moving the tiles of adjacent rows, but the defect will always remain visible. Edge dislocations resulting from the lack of whole lengths or regions of atoms/molecules in individual crystal layers act similarly, affecting the positions of atoms and molecules in many adjacent layers. And since the dislocations can extend over long distances, in practice the disturbances caused by them include the entire crystal.

The most interesting phenomena take place in the dislocation core, i.e. in the vicinity of the edge of the damaged layer of the crystal network. In order to eliminate long-range effects caused by a single dislocation, and thus significantly reduce the number of atoms under consideration, a trick was employed: a second dislocation of the opposite effect was introduced. In this way, the impact of the first dislocation over longer distances was compensated for.

The SiC crystal model consisted of about 400 atoms. The simulations showed that in the layers of crystals, along the edge of the core of the defect, ‘tunnels’ appear in the form of channels with reduced charge density. They lower the potential barrier locally and cause electric charges to ‘leak’ from the valence band. In addition, in the forbidden gap, which in the insulator guarantees a lack of electrical conductivity, conditions appear which reduce its width and effectiveness in limiting the flow of charge. It was shown that these states originate from atoms located in the dislocation core.

Now that the mechanisms responsible for lowering the threshold of the energy barrier have become known at the atomic level, there is a huge scope for experimentation. The proposed mechanism will have to be verified in order to be able to use it to limit the negative influence of the tested defects. Fortunately, there are already technical possibilities for this.

“The future will verify whether our ideas will be confirmed in their entirety. However, we are confident about the fate of our model and the presented approach to simulating edge dislocations. We already know that the ab initio model has proved its worth in confrontation with certain experimental data”, concludes Prof. Jochym.

Silicon carbide crystal model with edge dislocations introduced in places marked in red. A single crystallographic plane is presented at the bottom. The places where electric charges can ‘leak’ to neighboring layers are marked in yellow. (Source: IFJ PAN)