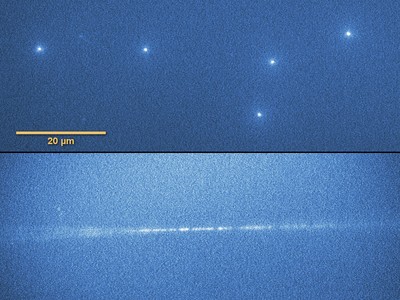 Tracks of heavy ions ‘imprinted’ in lithium fluoride crystals. At the top, spot tracks observed under a fluorescence microscope in plates perpendicular to the heavy ion beam. At the bottom, the ion tracks in the parallel oriented plate (the blurring at both ends of the trace is an artefact of the depth of focus of the microscope). Artificial colours. (Source: IFJ PAN)

Lithium fluoride crystals have recently been used to register the tracks of nuclear particles. Physicists from the Institute of Nuclear Physics of the Polish Academy of Sciences in Cracow have just demonstrated that these crystals are also ideal for detecting tracks of high-energy ions of elements even as heavy as iron.

When a nuclear particle enters into a crystal, it interacts with the atoms or molecules in its crystal network. In certain crystals and under the appropriate conditions, the resulting defect can be a source of weak light – luminescence. At the Institute of Nuclear Physics of the Polish Academy of Sciences (IFJ PAN) in Cracow research has been conducted on materials showing this type of properties for many years. One of them is lithium fluoride LiF. Its crystals have recently been used to detect low-energy particles such as alpha particles (helium nuclei). In their latest publication in the Journal of Luminescence, the Cracow-based physicists show that the field of application of lithium fluoride also extends to the detection of particles with significant energies and even includes ions of such heavy elements as iron 56Fe, completely stripped of electrons.

“Lithium fluoride track detectors are simply crystals. Unlike detection devices that monitor near-real time tracks of particles, they are passive detectors. In other words, they work like photographic film. Once crystals are exposed to radiation, we need to use a fluorescence microscope to find out what tracks we have recorded", says Prof. Pawel Bilski (IFJ PAN).

Fluorescent nuclear track detectors have been known for about a decade. So far, they have been made only from appropriately doped Al2O3 aluminium oxide crystals in which, under the influence of radiation, permanent colour centres are created. Such centres, when excited by light of an appropriate wavelength, emit photons (with lower energies) which make it possible to see the track of a particle under a microscope. In the case of lithium fluoride, the excitation is carried out with blue light and the emission of photons takes place in the red range.

“Detectors with doped aluminium oxide require an expensive confocal microscope with a laser beam and scanning. Tracks in lithium fluoride crystals can be seen with a much cheaper, standard fluorescent microscope”, says Prof. Bilski and emphasizes: “Tracks recorded in crystals very accurately reproduce the path of a particle. Other detectors, such as the well-known Wilson chamber, usually widen the track. In the case of LiF crystals, the resolution is restricted only by the diffraction limit.”

While the impossibility of observing tracks of particles in near real time is difficult to call an advantage, it does not always have to be a disadvantage. For example, in personal dosimetry, detectors are needed to determine the dose of radiation to which the user has been exposed. These devices must be small and easy to use. The millimetre-sized crystalline lithium fluoride plates meet this requirement perfectly. This is one of the reasons why these crystals, grown by Czochralski method in the IFJ PAN, can now be found in the European Columbus module of the International Space Station, among many other types of passive detectors. Replaced every six months within the DOSIS 3D experiment, the detectors make it possible to determine the spatial distribution of the radiation dose within the station and its variability over time.

During the latest research, crystalline lithium fluoride plates were exposed to high energy ions. The irradiation was carried out in the HIMAC accelerator in the Japanese city of Chiba. During the bombardment with various ion beams, the energies of particles ranged from 150 megaelectronvolts per nucleon in the case of 4He helium ions to 500 MeV/nucleon in the case of 56Fe iron ions. The detectors were also irradiated at with 12C carbon ions, 20Ne neon and 28Si silicon beams.

“In the crystal plates placed perpendicularly to the ion beam, we observed practically point sources of light of a size on the border of the optical resolution of a microscope. These were the places where the high-energy ion pierced the crystal”, says Prof. Bilski. “As part of the tests, some of the plates were also placed parallel to the beam. The probability of registering a track was then lower, but when it did happen, a long fragment of the track of the particle was ‘imprinted’ in the crystal.”

The tests carried out confirm that lithium fluoride track detectors are ideal for recording the passage of heavy ions with high energies. In addition, it seems that these are not the only possibilities of LiF crystals. Every other atom in their interior is lithium, which interacts very well with neutrons. Lithium fluoride detectors, especially those enriched with the lithium 6Li isotope, will probably allow for very effective registration of low-energy neutrons, and there is much to indicate that also those of a higher energy. If future studies confirm this assumption, it will be possible to construct personal neutron dosimeters. The small size of LiF crystals would also allow for interesting technical applications that are technologically inaccessible today. LiF track detectors could be used, for example, to study secondary particles formed around the primary proton beam produced by accelerators used in medicine to fight cancer.

Tracks of heavy ions ‘imprinted’ in lithium fluoride crystals. At the top, spot tracks observed under a fluorescence microscope in plates perpendicular to the heavy ion beam. At the bottom, the ion tracks in the parallel oriented plate (the blurring at both ends of the trace is an artefact of the depth of focus of the microscope). Artificial colours. (Source: IFJ PAN) 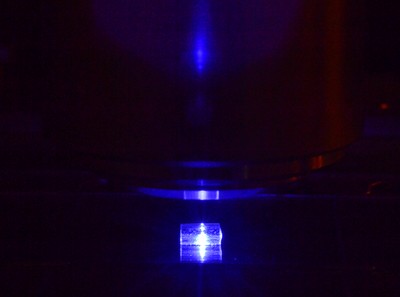