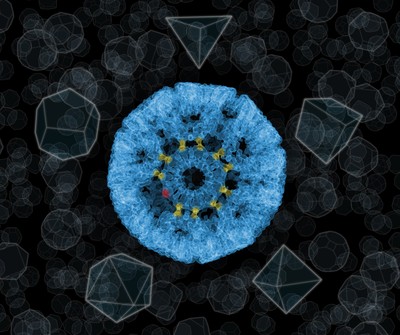 The ‘impossible’ sphere, i.e. a molecular nanocage of 24 protein rings, each of which has an 11-sided structure. The rings are connected by bonds with the participation of gold atoms, here marked in yellow. Depending on their position in the structure, not all gold atoms have to be used to attach adjacent proteins (an unused gold atom is marked in red). (Source: UJ, IFJ PAN)

It has long been known that gold can be used to do things that philosophers have never even dreamed of. The Institute of Nuclear Physics of the Polish Academy of Sciences in Cracow has confirmed the existence of ‘gold glue’: bonds involving gold atoms, capable of permanently bonding protein rings. Skilfully used by an international team of scientists, the bonds have made it possible to construct molecular nanocages with a structure so far unparalleled in nature or even in mathematics.

The world of science has been interested in molecular cages for years. Not without reason. Chemical molecules, including those that would under normal conditions enter into chemical reactions, can be enclosed within their empty interiors. The particles of the enclosed compound, separated by the walls of the cage from the environment, have nothing to bond with. These cages can be therefore be used, for example, to transport drugs safely into a cancer cell, only releasing the drug when they are inside it.

Molecular cages are polyhedra made up of smaller ‘bricks’, usually protein molecules. The bricks can't be of any shape. For example, if we wanted to build a molecular polyhedron using only objects with the outline of an equilateral triangle, geometry would limit us to only three solid figures: a tetrahedron, an octahedron or an icosahedron. So far, there have been no other structural possibilities.

“Fortunately, Platonic idealism is not a dogma of the physical world. If you accept certain inaccuracies in the solid figure being constructed, you can create structures with shapes that are not found in nature, what’s more, with very interesting properties,” says Dr. Tomasz Wrobel from the Cracow Institute of Nuclear Physics of the Polish Academy of Sciences (IFJ PAN).

Dr. Wrobel is one of the members of an international team of researchers who have recently carried out the ‘impossible’: they built a cage similar in shape to a sphere out of eleven-walled proteins. The main authors of this spectacular success are scientists from the group of Prof. Jonathan Heddle from the Malopolska Biotechnology Centre of the Jagiellonian University in Cracow and the Japanese RIKEN Institute in Wako. The work described in Nature magazine took place with the participation of researchers from universities in Osaka and Tsukuba (Japan), Durham (Great Britain), Waterloo (Canada) and other research centres.

Each of the walls of the new nanocages was formed by a protein ring from which eleven cysteine molecules stuck out at regular intervals. It was to the sulphur atom found in each cysteine molecule that the ‘glue’, i.e. the gold atom, was planned to be attached. In the appropriate conditions, it could bind with one more sulphur atom, in the cysteine of a next ring. In this way a permanent chemical bond would be formed between the two rings. But would the gold atom under these conditions really be able to form a bond between the rings?

“In the Spectroscopic Imaging Laboratory of IFJ PAS we used Raman spectroscopy and X-ray photoelectron spectroscopy to show that in the samples provided to us with the test nanocages, the gold really did form bonds with sulphur atoms in cysteines. In other words, in a difficult, direct measurement, we proved that gold ‘glue’ for bonding protein rings in cages really does exist,” explains Dr. Wrobel.

Each gold atom can be treated as a stand-alone clip that makes it possible to attach another ring. The road to the ‘impossible’ begins when we realize that we don't always have to use all of the clips! So, although all the rings of the new nanocages are physically the same, depending on their place in the structure they connect with their neighbours with a different number of gold atoms, and thus function as polygons with different numbers of vertices. 24 nanocage walls presented by the researchers were held together by 120 gold atoms. The outer diameter of the cages was 22 nanometres and the inner diameter was 16 nm.

Using gold atoms as a binder for nanocages is also important due to its possible applications. In earlier molecular structures, proteins were glued together using many weak chemical bonds. The complexity of the bonds and their similarity to the bonds responsible for the existence of the protein rings themselves did not allow for precise control over the decomposition of the cages. This is not the case in the new structures. On the one hand, gold-bonded nanocages are chemically and thermally stable (for example, they withstand hours of boiling in water). On the other hand, however, gold bonds are sensitive to an increase in acidity. By its increase, the nanocage can be decomposed in a controlled way and the contents can be released into the environment. Since the acidity within cells is greater than outside them, gold-bonded nanocages are ideal for biomedical applications.

The ‘impossible’ nanocage is the presentation of a qualitatively new approach to the construction of molecular cages, with gold atoms in the role of loose clips. The demonstrated flexibility of the gold bonds will make it possible in the future to create nanocages with sizes and features precisely tailored to specific needs.

The ‘impossible’ sphere, i.e. a molecular nanocage of 24 protein rings, each of which has an 11-sided structure. The rings are connected by bonds with the participation of gold atoms, here marked in yellow. Depending on their position in the structure, not all gold atoms have to be used to attach adjacent proteins (an unused gold atom is marked in red). (Source: UJ, IFJ PAN)