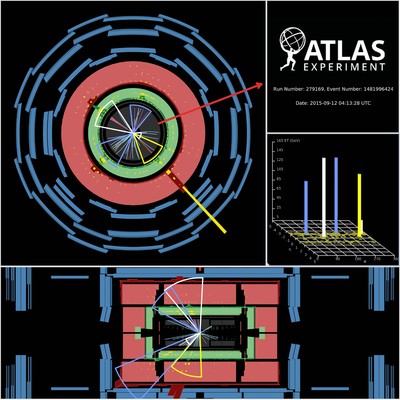 If an electrically charged Higgs boson exists, there are not many places where it can hide. The image presents one of the events covered by the latest analysis, with four jets (white and blue cones) and marked direction of the missing momentum (red arrow). (Source: ATLAS Collaboration, CERN, IFJ PAN)

The last missing particle of the Standard Model, the Higgs boson, was discovered in 2012 in the experiments at the Large Hadron Collider. Since then, searching for new, related particles has been underway. Predicted by various theories that go beyond known physics, Higgs bosons with positive or negative electric charge are among the favorites to be observed. But do these particles really exist?

At the European Organization for Nuclear Research CERN near Geneva, the Large Hadron Collider's second run of collisions and collecting data on particles and their decays has just ended. Over the next two years, the accelerator will undergo maintenance and the upgrades will come to fruition. Meanwhile, physicists intensively analyze data from the just-completed run. Their investigation focuses primarily on the search for elementary particles beyond the Standard Model, such as the electrically charged Higgs boson. The most recent analysis in this field was carried out by an international team of physicists working within the ATLAS experiment. The group consisted of researchers from the Institute of Nuclear Physics of the Polish Academy of Sciences (IFJ PAN) in Cracow and five other institutions scattered around the world.

“The Standard Model is a complex theoretical structure and describes all known elementary particles with excellent accuracy. We know, however, that it works well for experimentally accessible energies. At really high energies, the Standard Model predictions break down and hence the need for new, wider description, so-called new physics”, says Dr. Pawel Bruckman (IFJ PAN) and recalls that classical mechanics, for example, shows similar features. When the energy of moving bodies is low, its description is exact. However, when the speed becomes comparable to the speed of light, Newtonian physics must give way to relativistic theories.

Discovered in 2012 by ATLAS and CMS experiments, the neutral Higgs boson confirmed the existence of the mechanism necessary for the Standard Model consistency. Physicists, however, are aware that this particle may be only part of a wider Higgs sector, predicted by most theories that go beyond modern particle physics. In the most popular supersymmetric theories (where each known particle has an exotic, more-massive super-partner) there are five Higgs bosons. Three of them, including the standard one, are electrically neutral, while the other two are electrically charged (negatively and positively).

The team with Cracow researchers focused on those collision events between quarks and gluons, in which the charged Higgs bosons would be produced together with the t quark, and then decayed into a tau lepton (a much more massive equivalent of the electron) and its associated neutrino. In such events, a few neutrinos are emitted. These particles interact weakly with matter and are invisible to the detectors. Therefore, during the selection of decays, the amount of missing energy that neutrinos would carry away was important.

For the purpose of the analysis, Cracow researchers, financed by the OPUS grant from the Polish National Science Center, developed and optimized a multivariate discriminant method. The technique, based on many carefully selected variables and correlations between them, maximizes the discrimination of the expected signal from the overwhelming background.

“Within the current sensitivity, we can say at the 95% confidence level that in the selected range of masses we have not observed charged Higgs bosons. This is a very strong limitation on the new theories. We intend to improve it even further in the next round of the analysis, by taking into account all data from the recently completed second run of the LHC accelerator. It is still possible that the charged Higgs is hidden somewhere in the mass range covered by our analysis, but we are not yet sensitive enough to see its signal”, says Dr. Anna Kaczmarska (IFJ PAN).

The results of the analysis, published in the Journal of High Energy Physics, are particularly valuable to help selecting theoretical models that try to go beyond known physics. The parameter space of these models has been significantly narrowed. As a consequence, their predictions will be more precise and easier to verify.

If an electrically charged Higgs boson exists, there are not many places where it can hide. The image presents one of the events covered by the latest analysis, with four jets (white and blue cones) and marked direction of the missing momentum (red arrow). (Source: ATLAS Collaboration, CERN, IFJ PAN)