Bitcoin better than the dollar? 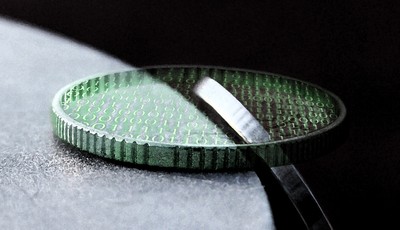 Will bitcoin topple the dollar of its pedestal? (Source: IFJ PAN)

The name itself, cryptocurrency, does not inspire trust. Clusters of bits, considered by many as money of a doubtful nature. Advanced statistical analysis for the Bitcoin market carried out at the Institute of Nuclear Physics of the Polish Academy of Sciences in Cracow, however, has not shown any significant differences between its basic statistical parameters and their equivalents for respected financial markets. All indications are that Bitcoin is a better currency than it might seem at first glance.

Bitcoin, the first and the most popular cryptocurrency, is still treated by many investors with a deal of mistrust. A detailed statistical analysis of the Bitcoin market (BTC), conducted at the Institute of Nuclear Physics of the Polish Academy of Sciences (IFJ PAN) in Cracow, contradicts this common opinion. The analysis, published in the renowned scientific journal Chaos: An Interdisciplinary Journal of Nonlinear Science, shows Bitcoin – and potentially other cryptocurrencies – in a surprisingly positive light.

The credibility of traditional currencies seems to be, to a significant degree, a psychological artefact resulting from the nature of their evolution. Subconsciously, we believe that since at one time there used to be specific material commodities behind money, this is still the case today. But from the physical point of view, traditional currencies have for quite some time now been the same as cryptocurrencies from their moment of birth: clusters of bits in the memory of bank computers. The real value of a currency is now determined not by what lies behind it, but first and foremost by what is happening to it – that is, the market.

“When new emerging financial markets started to appear in Central and Eastern Europe after the collapse of socialism, the question of their stability naturally arose. A number of statistical criteria were identified at that time, making it easier to assess the maturity of the market. We were curious about the results we would get if we used them to look at the Bitcoin market, currently valued at hundreds of billions of dollars,” says Prof. Stanislaw Drozdz (IFJ PAN, Cracow University of Technology).

An analysis was carried out for changes of the Bitcoin price in the period from 2012 to April 2018, posted in one-minute sequences. Rates of return were first in line. There is good quantitative evidence that in a mature market and in sufficiently short time scales their probability distributions are subject to inverse cubic law. Behind this dangerously sounding name there is a simple dependency: the distribution is described by the inversion of the third power of the examined quantity.

“Initially, the graphs we got were a bit crooked, which did not augur anything promising. But when we took a closer look at the data, suddenly it turned out that this crookedness originated from the first two years of the analysed period, that is, from the time when the market was just starting to shape itself. Later on, the rates of return fluctuated according to the inverse cubic law,” says Prof. Drozdz.

The researchers' magnifying glass then focused on the volatility of rates of return. In mature global markets, the signs of returns (indicating whether we are earning or losing) are not correlated – and this is exactly what the Bitcoin market shows. However, time correlations in the dynamics of finance may appear in more subtle dependencies, for example in various forms of volatility clustering. We talk about this type of effect when the range of variability of the studied size is set at a more or less constant level for a certain period of time determining the size of the cluster, after which the range changes to sizes significantly smaller or larger than the previous one – and this type of variability evolves over time.

Volatility clustering is associated with another feature: the reluctance of the system to change trend. This reluctance is described by a parameter known as the Hurst exponent. It assumes values from 0 to 1. A value equal to 0.5 means that in the next measurement the tested value has the same probability of changing up as of changing down. Values below 0.5 indicate a tendency to fluctuate and correspond to situations where a rise in value increases the probability of a decrease (or vice versa). Values above 0.5 indicate the persistent nature of the changes: after an increase we have a higher probability of another increase, after a decrease we have a higher probability of a further fall. It turns out that for the Bitcoin market, the Hurst exponent approaches 0.5, which is characteristic of markets with a high reputation.

“One of the more sophisticated features signalling the maturity of a market is the multifractal nature of its characteristics. Multifractals are fractals of fractals, i.e. structures in which, in order to see self-similarity, various fractal fragments have to be magnified at different speeds. Multifractal analyses reveal dependencies existing in many scales. In the case of Bitcoin, we detected multifractality in the functions of fluctuations in rates of return, particularly evident in the last six months of the examined period. This was of the same type as for regular, mature markets, such as the stock, dollar, oil or bond markets,” says Prof. Drozdz and concludes: “The most important statistical parameters of the Bitcoin market indicate very clearly that for many months now it has met all the important criteria of financial maturity. It seems that in the case of other cryptocurrencies it will be possible to expect a similar transformation. If this happens, the world's largest market, the Forex market, can look forward to very real competition.”

Taken in a broader context, these statements lead to an intriguing observation. The real foreign exchange market matures with the help of a central bank or a government. Bitcoin, on the other hand, has matured on its own, solely due to its own characteristics, integrally incorporated in the foundations of its own market. So which of these currencies should we consider structurally better?

Will bitcoin topple the dollar of its pedestal? (Source: IFJ PAN)