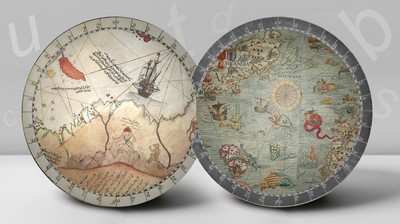 Will anomalies observed in the decays of beauty mesons disappear with the new data, as exotic lands disappeared from maps of cartographers? The latest analysis, taking into account long-range interactions, proves that the anomalies are visible not less, but better. (Source: IFJ PAN)

For some time now, in the data coming in from the LHCb experiment at the Large Hadron Collider, several anomalies have been seen in the decays of beauty mesons. Are they more than just statistical fluctuations? The latest analysis, conducted with the participation of the Institute of Nuclear Physics of the Polish Academy of Sciences and taking into account so-called long-distance effects in the decays of particles, increases the probability that what is behind the anomalies is more than just another prank played by measuring techniques.

In old times, when sailors ventured into unknown waters, the only thing they could really be sure about was the vastness of the empty ocean. On occasion, after months of voyaging, one or another would glimpse a scrap of land in the distance, but usually it was just an illusion. Only sometimes did a peak emerge from behind the horizon, which became clearer the closer they approached. It seems that physicists looking for traces of new physics using the LHC accelerator are in a similar situation today. While seekers of direct traces of new physics eliminate all potential new signals in particle collisions, revealing the void predicted by the Standard Model, others looking at other phenomena begin to see more and more distinct “peaks” in the ocean of data that do not seem to intend to disappear.

The Standard Model is a set of theoretical tools constructed in the 1970s to describe phenomena occurring in the scale of atomic nuclei and elementary particles. It works very well, but cannot provide answers to some particularly important questions. Why do elementary particles have particular masses, why do they create families? Why does matter so clearly dominate over antimatter? What does dark matter consist of? There is a well-founded belief among physicists that the Standard Model only describes a fragment of reality and needs to be extended.

“For a long time in the LHC, there has been an intense hunt for everything whose presence cannot be explained by current physics. At present, the search for new particles or phenomena in a direct way remains fruitless. However, several anomalies have been found in data containing decays of beauty mesons. They are becoming more interesting day by day because the more data we process and the more effects we take into account when describing them, the better they are visible”, explains Dr. Marcin Chrzaszcz (IFJ PAN, University of Zurich), co-author of the latest publication, financed by the Polish National Science Centre and presented in the journal European Physical Journal C. The other three authors are Christoph Bobeth from the Technical University of Munich, Danny van Dyk from the University of Zurich (UZ), and Javier Virto from the PM and the Centre for Theoretical Physics at the Massachusetts Institute of Technology in Cambridge, USA.

Researchers looked at the anomalies detected in the decays of beauty mesons. Mesons, particles made of quark-antiquark pairs, come in many varieties. The afore-mentioned B (beauty) mesons contain a down quark, one of the components of protons and neutrons that is common in nature, and a beauty anti-quark. Mesons are unstable systems and quickly disintegrate in many ways that are described as channels of decay. One of these anomalies was observed in the decay channel of meson B to another meson (K*; this meson contains a strange quark instead of a beauty quark) and a muon-antimuon pair (muons are elementary particles with properties similar to electrons, only almost 200 times more massive).

“In previous calculations, it was assumed that when the meson disintegrates, there are no more interactions between its products. In our latest calculations we have included the additional effect: long-distance effects called the charm-loop. They consist of the fact that with a certain probability the products of decay interact with each other, for example exchanging gluon, the particle responsible for strong interactions, bonding quarks in protons and neutrons”, says Dr. van Dyk (UZ).

The effect of measurements in physics is usually described by the value of the sigma standard deviation. An effect differing from predictions by more than three standard deviations (3 sigma) is treated as an observation, a discovery is said to have been made when the accuracy rises above 5 sigma (which means a probability of less than one in three and a half million, that random fluctuation will give the observed result). Analyses of the decays of B mesons to K* mesons and a muon-antimuon pairs, carried out with the participation of researchers from the Institute of Nuclear Physics PAS, shown a tension with Standard Model prediction of 3.4 sigma (in other decay channels anomalies of a similar nature were observed). Meanwhile, the inclusion of long-range effects in the theoretical description increased this value to 6.1 sigma. Researchers hope that the mathematical methods proposed by them, applied to similar decay channels, will also significantly increase the precision of estimates.

“The detected anomalies do not disappear in subsequent analyses. Now that the theoretical description of these processes has been worked out, everything depends only on the statistical precision, which is determined by the number of decays being analyzed. We will probably have a sufficient amount within two or three years to confirm the existence of an anomaly with a credibility entitling us to talk about a discovery”, says Dr. Chrzaszcz.

The question of what is the origin of the observed anomalies remains open. Many physicists suppose that an unknown elementary particle outside the Standard Model may be responsible for their existence. A good candidate, for example, would be the Z' boson, proposed by theoreticians. Direct verification of this hypothesis, however, would require further experiments performed on an accelerator more powerful than the modern LHC configuration.

Will anomalies observed in the decays of beauty mesons disappear with the new data, as exotic lands disappeared from maps of cartographers? The latest analysis, taking into account long-range interactions, proves that the anomalies are visible not less, but better. (Source: IFJ PAN)