The chances of detecting clumps in atomic nuclei are growing 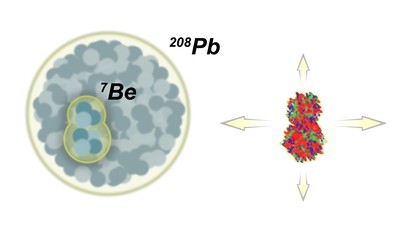 The ultrarelativistic collision of a clustered beryllium nucleus 7Be with a heavy lead nucleus 208Pb creates a fireball of quark-gluon plasma. The initial shape of the fireball and its expansion rates in various directions carry information about the original structure of the beryllium nucleus. (Source: IFJ PAN)

What do atomic nuclei really look like? Are the protons and neutrons they contain distributed chaotically? Or do they perhaps bind into alpha clusters, that is, clumps made up of two protons and two neutrons? In the case of several light nuclei, experimental confirmation of the individualism or family nature of nucleons will now be simpler thanks to predictions presented by Polish physicists from Cracow and Kielce.

Any high school student worth his salt knows exactly what an atomic nucleus looks like: it is a conglomerate of randomly distributed protons and neutrons (i.e. nucleons). Physicists themselves, however, do not have such clear-cut ideas. Already in 1931, only 20 years after the discovery of the atomic nucleus, the first suggestions were put forward that protons and neutrons in atomic nuclei merge into helium nuclei, that is, into groups of two protons and two neutrons, often called alpha clusters. Atomic nuclei are, however, structures that are so extremely small and difficult to study that although almost a century has passed since the first predictions, it still has not been possible to explicitly confirm the occurrence of alpha clusters in them.

The lowering of energy in physical systems favours the merging of structures into groups. This powerful, universal mechanism occurs in nature on all size scales: quarks combine into mesons or baryons, atoms into molecules, stars into galaxies, and galaxies into groups of galaxies. In the case of atomic nuclei, computer simulations suggest that e.g. the nucleus of beryllium 9Be contains two alpha clusters and one neutron (the whole complex would look like a dumbbell). In the 12C carbon nucleus there should be three alpha clusters (the shape of the nucleus would thus be triangular), four in oxygen 16O (here the nucleus would resemble a pyramid), ten in calcium 40Ca and fourteen in nickel 56Ni.

In 2014, scientists from the Institute of Nuclear Physics of the Polish Academy of Sciences (IFJ PAN) in Cracow, in collaboration with physicists from the Universidad de Grenada, presented a method of detecting traces of the original structure of atomic nuclei in the distribution of velocities of particles diverging from the points of ultrarelativistic collisions of light atomic nuclei with a shield made of heavy nuclei, such as lead 208Pb lead or gold 197Au. Those predictions focused on methods of detection of alpha clusters in 12C carbon nuclei.

“In our latest publication, written together with physicists from the Institute of Physics at the Jan Kochanowski University in Kielce, we present more detailed predictions concerning the possibility of observing traces of alpha clusters in atomic nuclei. We show how these clusters could be detected in subsequent nuclei, not only carbon 12C, but also beryllium 7Be and 9Be and oxygen 16O”, says Prof. Wojciech Broniowski (IFJ PAN, UJK).

The method of detecting alpha clusters in atomic nuclei, described in the publication distinguished by the editors of Physical Review C, is based on an interesting relationship. Heavy atomic nuclei, even if they were to consist of alpha clusters, are so large that with good approximation they can be treated as quite homogeneous spheres. When a light atomic nucleus strikes such a nucleus at an ultrarelativistic velocity (thus very close to the speed of light), the collision energy is so great that for fractions of a second, protons and neutrons disintegrate into quarks and the gluons that stick them together. Then probably the most exotic fluid is formed: quark-gluon plasma.

“In our work, we note that if the light atomic nucleus is not homogeneous, the cloud of quark-gluon plasma created as a result of the collision is deformed. Its shape will at least to some extent correspond to the shape of the light nucleus. Plasma will therefore spill over in all directions, but in different directions at slightly different speeds”, explains Dr. Maciej Rybczynski.

The quark-gluon plasma cools down so fast that its direct observation is not currently possible. After just a few femtoseconds (millionths of one billionth of a second), the quarks and gluons merge again into particles in a process called hadronization.

“In the directions in which the quark-gluon plasma flows slightly faster, we can expect slightly higher particle velocities caused by hadronization. So if we record momenta of particles diverging from the point of collision with sufficient precision, we are potentially able to extract information about the shape of the nucleus that has struck the shield from minor differences. In addition, this information will concern nuclei in the ground state,” explains Milena Piotrowska, PhD student at UJK.

The research of physicists from the IFJ PAN and UJK, co-financed by Polish National Science Centre grants, provides specific theoretical predictions. The next step now belongs to the experimental physicists working on high-energy accelerators, such as Super Proton Synchrotron (SPS) or Large Hadron Collider (LHC) in the European CERN organization or Relativistic Heavy- Ion Collider (RHIC) in the American Brookhaven National Laboratory. Since experiments confirming the lumpy structure of atomic nuclei do not require the expansion of currently operating apparatus, it will be possible to carry out these experiments within the next few years.

The ultrarelativistic collision of a clustered beryllium nucleus 7Be with a heavy lead nucleus 208Pb creates a fireball of quark-gluon plasma. The initial shape of the fireball and its expansion rates in various directions carry information about the original structure of the beryllium nucleus. (Source: IFJ PAN)