The doubly magic nucleus of lead-208 – it spins, though it shouldn't! 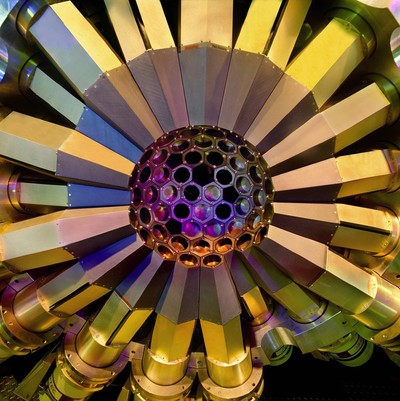 One hemisphere of the Gammasphere, the most advanced instrument for detecting gamma rays. (Source: Roy Kaltschmidt, Lawrence Berkeley Lab photographer)

We generally imagine atomic nuclei to be more or less spherical, but always relatively chaotic, clusters of protons and neutrons. Experiments at the Argonne National Laboratory, inspired by physicists from the Institute of Nuclear Physics of the Polish Academy of Sciences in Cracow, are trying to verify these simple ideas. Using an astronomical analogy we can say that in as much as the majority of nuclei are similar in outline to rocky objects such as moons or asteroids of different shapes, then nuclei of lead-208 under certain conditions resemble planets surrounded by a dense atmosphere that can move around a rigid core.

For a dozen or so years physicists from the Institute of Nuclear Physics of the Polish Academy of Sciences (IFJ PAN) in Cracow, in collaboration with researchers from Argonne National Laboratory (ANL) in Illinois, USA, have been investigating the properties of the nuclei of lead-208 atoms. A recently published analysis summarizing the experiments conducted at ANL using the ATLAS superconducting accelerator and Gammasphere, the most sophisticated gamma ray detector in the world, has led to interesting conclusions. It turns out that under certain conditions new, relatively stable energy states unpredictable from theory are produced in lead-208 nuclei. What's more, there are indications suggesting the existence in such nuclei of previously unrecognized structure of a collective nature.

“Atomic nuclei can be excited to a variety of energy states, including those in which they spin rapidly. However, not all nuclei in such states must actually spin”, says Prof. Rafal Broda (IFJ PAN), the first author of a publication distinguished by the journal Physical Review C, and explains: “The nucleus of lead-208 consists of 82 protons and 126 neutrons and, with a very good approximation, can be considered spherical. When we use quantum mechanics equations to describe nuclei of this shape, talking about spinning of the nucleus becomes senseless since the positions in different phases of spin are indistinguishable, so there are no changes in energy. Therefore, it is assumed that spherical nuclei do not spin, and the spin-related physical size – the spin of the nucleus – is derived entirely from several coupled nucleons moving around their orbits. Meanwhile, our research shows that in the nuclei of lead-208 a wide range of spin values is observed, up to high-spin states, a sequence of states that can be interpreted as related to collective spin. The sixty-four-thousand-dollar question then is: what is it that is spinning in such a nucleus?”

In modern physics, the structure of whole atoms is described using a shell model. This assumes that electrons, carrying a negative electrical charge, move at considerable distances around a positively charged, practically punctate nucleus. However, the probability of finding an electron is only high in certain areas, where the electron energy assumes strictly defined values. The nucleus in the atom is therefore surrounded by a spatial structure formed by a lesser or greater number of energetic shells. Each shell has a certain maximum capacity, and if the number of electrons exceeds this capacity, the excess electrons must transition to the next shell, further away from the nucleus.

When the outermost electron shell becomes filled with electrons, the atom is reluctant to react with other atoms or molecules. In chemistry, such elements are called noble gases due to their particular stability and lack of chemical activity.

Atomic nuclei are much more complex objects than atoms treated as a punctate positive charge surrounded by a group of distant electrons. Nucleons, or the protons and neutrons that make up the nucleus, have masses that are thousands of times greater than the electron, and additionally, all the particles are close together and enter into numerous nuclear and electromagnetic interactions. Therefore, at the time, it was a great surprise for physicists to discover that the shell model also works for atomic nuclei. However, the situation here is more interesting, because the neutrons and protons form their own shells in the nuclei, which are particularly stable for numbers of nucleons that are known as magic numbers. Physicists call nuclei with completely filled proton and neutron shells doubly magic. Lead-208 is unique in this group because it is the most massive doubly magic nucleus.

The properties of lead-208 nuclei in low-spin states are quite well known, but as far as high-spin states are concerned, until recently this was not the case. Atomic nuclei in such states are produced by the process of fusion taking place in collisions that occur when a target made of a suitably selected material is bombarded with matched particles. Unfortunately, there is no particle-target combination capable of producing lead-208 nuclei in high-spin states. This is why for three decades the Cracow group headed by Prof. Broda has been working on the use of deep inelastic collisions to study nuclei that are inaccessible in fusion processes. In collisions of this kind, the bombarding nuclei interact with the target nuclei, but do not merge with them.

“In a high-spin state – the effect of a deep inelastic collision – the nucleus is excited and is trying to return to the lowest energy state. It gets rid of its excess in several to a few dozen stages, each one emitting gamma radiation with an energy characteristic for its transition. By analyzing the energies of this radiation, we are able to obtain a lot of information about the structure of atomic nuclei and the processes taking place within them”, explains Dr. Lukasz Iskra (IFJ PAN).

The latest analysis uses measurements taken at ANL together with Prof. Robert Janssens' group. In these experiments, lead-208 or uranium-238 targets were bombarded with ions of lead-208, selenium-82, germanium-76, nickel-64 or calcium-48. The gamma radiation was recorded by a Gammasphere detector, consisting of 108 high quality germanium detectors (this spectacular instrument can be seen, among others, in the film The Hulk).

To the surprise of the researchers, the latest analysis has permitted the detection in lead-208 nuclei of structures and phenomena that were not anticipated by current theory. Many new energy states were observed, and three were found to be isomeric states, and thus much more stable than others. In normal states the nucleus occurs for picoseconds, whereas in one of the isomeric states the nucleus was detected for up to 60 nanoseconds (billionths of a second), that is, a thousand times longer.

Of most interest were the results suggesting collective spin – in a nucleus that is spherical, and therefore from the point of view of quantum mechanics should not spin! Researchers assume that at high spins a rigid core is formed in the nucleus of lead-208, the next up from the point of view of mass is the doubly magic nucleus, i.e. tin-132. It seems that this core does not spin, but the outer layer formed by the other 76 nucleons rotates.

“Beginning with certain high-spin states, the lead-208 nucleus ceases to be a homogeneously rigid object, such as, for example, the geologically almost dead Moon. A better astronomical analogy would be a rocky body with a very dense atmosphere, but not as calm as Venus or Titan. This atmosphere should move swiftly over the surface, so it could be like a global hurricane”, says Prof. Broda.

In modern physics the shell model is the basic tool for describing atomic nuclei. The new effects, which it has so far been impossible to predict within this model, discovered by the Polish-American experiments with lead-208 nuclei, will enable theoreticians to incorporate further phenomena into the model and increase the precision of its predictions.

One hemisphere of the Gammasphere, the most advanced instrument for detecting gamma rays. (Source: Roy Kaltschmidt, Lawrence Berkeley Lab photographer)