A revolution in lithium-ion batteries is becoming more realistic 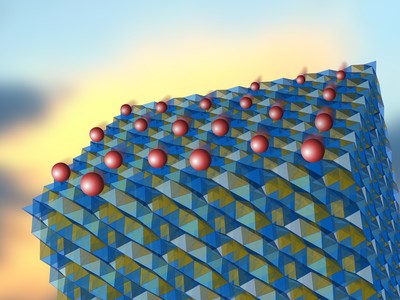 Lithium amide-borohydride is a promising candidate for a solid electrolyte. The crystalline structure of this material consists of two sub-lattices, shown in different colors. Under appropriate conditions, lithium ions (red), normally found in the elementary cells of only one sub-lattice (yellow), move to the empty cells of the second sub-lattice (blue) where they can freely propagate. (Source: IFJ PAN)

The modern world relies on portable electronic devices such as smartphones, tablets, laptops, cameras or camcorders. Many of these devices are powered by lithium-ion batteries, which could be smaller, lighter, safer and more efficient if the liquid electrolytes they contain were replaced by solids. A promising candidate for a solid-state electrolyte is a new class of materials based on lithium compounds, presented by physicists from Switzerland and Poland.

Commercially available lithium-ion batteries consist of two electrodes connected by a liquid electrolyte. This electrolyte makes it difficult for engineers to reduce the size and weight of the battery, in addition, it is subjected to leakage; the lithium in the exposed electrodes then comes into contact with oxygen in the air and undergoes self-ignition. Boeing's troubles, which for many months caused a full grounding of Dreamliner flights, are a spectacular example of the problems brought about by the use of modern lithium-ion batteries.

Laboratories have been searching for solid materials capable of replacing liquid electrolytes for years. The most popular candidates include compounds in which lithium ions are surrounded by sulphur or oxygen ions. However, in the journal Advanced Energy Materials, a Swiss-Polish team of scientists has presented a new class of ionic compounds where the charge carriers are lithium ions moving in an environment of amine (NH2) and tetrahydroborate (BH4) ions. The experimental part of the research project was carried out at Empa, the Swiss Federal Laboratories for Materials Science and Technology in Dübendorf, and at the University of Geneva (UG). The person responsible for the theoretical description of the mechanisms leading to the exceptionally high ionic conductivity of the new material was Prof. Zbigniew Lodziana from the Institute of Nuclear Physics of the Polish Academy of Sciences (IFJ PAN) in Cracow.

“We were dealing with lithium amide-borohydride, a substance previously regarded as not being too good an ionic conductor. This compound is made by milling two constituents in a ratio of 1 to 3. To date, nobody has ever tested what happens to ionic conductivity when the proportions between these constituents are changed. We were the first to do so and suddenly it turned out that by reducing the number of NH2 groups to a certain limit we could significantly improve the conductivity. It increases so much that it becomes comparable to the conductivity of liquid electrolytes!” says Prof. Lodziana.

The several dozen-fold boost in ionic conductivity of the new material – the effect of a change in the proportion of its constituents – opens up a new, unexplored direction in the search for a candidate for a solid-state electrolyte. Previously, throughout the world, the focus was almost exclusively on changes in the composition of the chemical substance. It has now become apparent that, at the stage of production of the compound, a key role can be played by the proportions themselves of the ingredients used to manufacture them.

“Our lithium amide-borohydride is a representative of a promising new class of solid-state electrolyte materials. However, it will be some time before batteries built on such compounds come into use. For example, there should be no chemical reactions between the electrolyte and the electrodes leading to their degradation. This problem is still waiting for an optimal solution”, comments Prof. Lodziana.

The research prospects are promising. The scientists from Empa, UG and IFJ PAN did not confine themselves to just characterizing the physico-chemical properties of the new material. The compound was used as an electrolyte in a typical Li4Ti5O12 half-cell. The half-cell performed well, in tests of running down and recharging 400 times it proved to be stable. Promising steps have also been taken towards resolving another important issue. The lithium amide-borohydride described in the publication exhibited excellent ionic conductivity only at about 40°C. In the most recent experiments this has already been lowered to below room temperature.

“In the proposed model, the excellent ionic conductivity is a consequence of the specific construction of the crystalline lattice of the tested material. This network in fact consists of two sub-lattices. It turns out that the lithium ions are present here in the elementary cells of only one sub-lattice. However, the diffusion barrier between the sub-lattices is low. Under appropriate conditions, the ions thus travel to the second, empty sub-lattice, where they can move quite freely”, explains Prof. Lodziana.

The theoretical description presented here explains only some of the observed features of the new material. The mechanisms responsible for its high conductivity are certainly more complex. Their better understanding should significantly accelerate the search for optimal compounds for a solid-state electrolyte and consequently shorten the process of commercialization of new power sources that are most likely to revolutionize portable electronics.

Lithium amide-borohydride is a promising candidate for a solid electrolyte. The crystalline structure of this material consists of two sub-lattices, shown in different colors. Under appropriate conditions, lithium ions (red), normally found in the elementary cells of only one sub-lattice (yellow), move to the empty cells of the second sub-lattice (blue) where they can freely propagate. (Source: IFJ PAN)