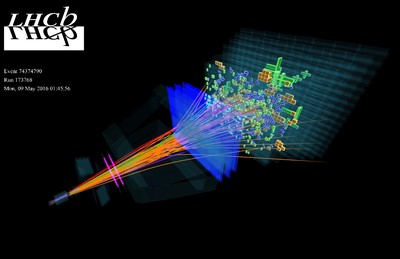 In the first moments after the Big Bang, the Universe was able to expand even billions of billions of billions of times faster than today. Such rapid expansion should be due to a primordial force field, acting with a new particle: inflaton. From the latest analysis of the decay of mesons, carried out in the LHCb experiment by physicists from Cracow and Zurich, it appears, however, that the most probable light inflaton, a particle with the characteristics of the famous Higgs boson but less massive, almost certainly does not exist.

Just after the Big Bang, the Universe probably passed through a phase of inflation, an extreme burst of expansion. If inflation did really occur, there should be a new force field behind it. Its force carriers would be hypothetical, hitherto unobserved particles, inflatons, which should have many features reminiscent of the famous Higgs boson. Physicists from the Institute of Nuclear Physics of the Polish Academy of Sciences (IFJ PAN) in Cracow and the University of Zurich (UZH) searched for traces of light inflatons in the decay of B+ mesons recorded by detectors in the LHCb experiment at CERN near Geneva. Detailed analysis of the data, carried out with funds provided by the Polish National Science Centre, however, places a large question mark over the existence of light inflatons.

Despite having weak effects, gravity decides about the appearance of the Universe on its greatest scales. As a consequence, all modern cosmological models have their foundations in our best theory of gravity: Albert Einstein's general theory of relativity. Already the first cosmological models constructed on the theory of relativity suggested that the Universe was a dynamic creation. Today we know that it used to be extremely dense and hot, and 13.8 billion years ago it suddenly started to expand. The theory of relativity allows for predictions of the course of this process starting from fractions of a second after the Big Bang.

“One of the earliest survivors of these events visible to this day is the microwave background radiation that formed a few hundred thousand years after the Big Bang. It currently corresponds to a temperature of about 2.7 kelvins and uniformly fills the entire Universe. It is this homogeneity that has proved to be a great puzzle,” says Dr. Marcin Chrzaszcz (IFJ PAN) and explains, “When we look into the sky, the deep space fragments visible in one direction may be so distant from those visible in another direction that light has not yet had time to pass between them. So nothing that has happened in one of these areas should affect the other. But wherever we look, the temperature of distant regions of the cosmos is almost identical! How could it have become so uniform?”

The uniformity of microwave background radiation is explained by the mechanism proposed by Alan Guth in 1981. In his model, the Universe initially expanded slowly, and all its fragments observed today had time to interact and level out the temperature. According to Guth, at some point, however, there must have been a very short but extremely rapid expansion of space-time. The new force field responsible for this inflation expanded the Universe to such an extent that today it exhibits a remarkable uniformity (as far as the temperature of the cosmological microwave background is concerned).

“A new field always means the existence of a particle that is the carrier of the effect. Cosmology has thus become interesting for physicists examining phenomena in the microscale. For a long time a good candidate for the inflaton appeared to be the famous Higgs boson. But when in 2012 the higgs was finally observed in the European LHC accelerator, it turned out to be too heavy. If higgs with its mass was responsible for inflation, today's relict radiation would look different than currently observed by the COBE, WMAP and Planck satellites,” says Dr. Chrzaszcz.

Theoreticians proposed a solution to this surprising situation: the inflaton would be a completely new particle, with the properties of higgs, but with clearly smaller mass. In quantum mechanics, the identical nature of characteristics causes particles to be able to oscillate: they cyclically transform one into another. An inflation model constructed in this way would have only one parameter, describing the frequency of oscillation/transformation between the inflaton and the Higgs boson.

“The mass of the new inflaton could be small enough for the particle to appear in the decay of B+ mesons. And these beauty mesons are particles recorded in large number by the LHCb experiment at the Large Hadron Collider. So we decided to look for decay of mesons happening through the interaction with the inflaton in the data collected in the LHC in 2011-12,” says PhD student Andrea Mauri (UZH).

If light inflatons actually existed, the B+ meson would sometimes decay into a kaon (K+ meson) and a Higgs particle, which would convert into an inflaton as a result of the oscillation. After travelling a few metres in the detector, the inflaton would decay into two elementary particles: muon and antimuon. Detectors of the LHCb experiment would not record the presence of either the higgs or the inflaton. Researchers from the IFJ PAN, however, expected to see the emission of kaons and the appearance of muon-antimuon pairs respectively.

“Depending on the parameter describing the frequency of the inflaton-higgs oscillation, the course of B+ meson decay should be slightly different. In our analysis we were looking for decays of up to 99% of the possible values of this parameter – and we found nothing. We can therefore say with great certainty that light inflaton simply does not exist,” says Dr. Chrzaszcz.

Theoretically, low-mass inflaton may still be hidden in one percent of the unexamined variations in oscillation. These cases will eventually be excluded by future analyses using newer data that is now being collected at the LHC. However, physicists have to slowly become accustomed to the idea that if inflaton exists, it is a more massive particle than was thought or that it occurs in more than one variation. If, however, over time these variants also prove not to correspond to reality, inflation, which explains the observed homogeneity of the Universe so well, will become – very literally – the greatest mystery of modern cosmology.