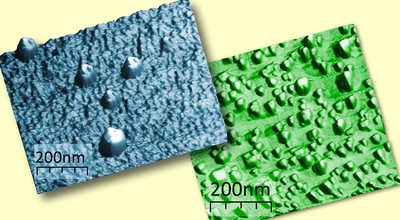 Microscopic images of the europium silicide nanoislands on the silicon surface. The nanoislands are completely isolated (left) or adjoining each other (right). (Source: IFJ PAN)

Europium silicide has for some time attracted the attention of scientists. Recognized as being promising for electronics and spintronics, this material has recently been submitted by a team of physicists from Poland, Germany and France to comprehensive studies of the vibrations of its crystal lattice. The results yielded a surprise: deposited on a substrate of silicon, some structures of europium silicide appear to vibrate in a way that clearly broadens the possibilities of designing nanomaterials with tailored thermal properties.

The vibrations of atoms in the crystal lattices of materials, known as phonons, are not chaotic. Instead, they are governed by the lattice symmetry, atomic mass and other factors. For instance, the atoms deep in the solid oscillate differently than on its surface, and still differently when the material forms, for example, nanoislands i.e. small atomic clusters on a substrate. An international team of physicists, composed of scientists from the Institute of Nuclear Physics of the Polish Academy of Sciences (IFJ PAN) in Cracow, the Karlsruhe Institute of Technology (KIT) and the European Synchrotron (ESRF) in Grenoble, have for the first time comprehensively examined how the vibrations of the crystal lattice of europium silicide (EuSi2) change depending upon the nanostructures arrangement on a substrate of silicon. The study yielded remarkable results: a new type of vibration was observed in the sample in which the EuSi2 nanoislands were in contact with each other.

"Usually nanoengineering means modifying material on a scale of nanometres, or billionths of a metre. The research on europium silicide in which we participated allows us to offer something more: phonon nanoengineering, i.e. engineering in which not so much the structure of the material is carefully designed as the vibrations of atoms in its crystal lattice," says Dr. Przemyslaw Piekarz (IFJ PAN).

Europium silicide forms a crystal, in which each europium atom is surrounded by 12 silicon atoms. The system exhibits what is known as tetragonal symmetry: the distance between atoms in one direction is different than in the two remaining directions. This metallic compound readily binds to silicon, and also has a record-breakingly low so-called Schottky barrier (i.e. the barrier of potential energy electrons encounter on their transition from the metal to silicon). Such materials are of interest today in view of their potential application in nanoelectronic systems, for example, in MOSFET technology used in the production of modern processors. However, at low temperatures EuSi2 also exhibits interesting magnetic properties, which makes it attractive for the successor of electronics - spintronics.

Although compounds of rare earth metals and silicon play a fundamental role in heat transport, among others, their lattice vibrations have not to date been comprehensively studied. Meanwhile, in nanoelectronic systems where heat is generated in large amounts, thermal properties of a material became as important as the magnetic or electric properties.

A group led by Dr. Svetoslav Stankov (KIT, Germany) has developed a procedure for the preparation of epitaxial EuSi2 nanostructures by depositing, in ultrahigh vacuum conditions, small amounts of europium atoms on a heated substrate of single crystalline silicon. Moreover, by careful adjustment of the temperature of the substrate and the amount of europium atoms they were able to tailor the morphology of the prepared EuSi2 nanostructures on the silicon surface.

"In this experiment we focused our attention on four europium silicide samples forming: a uniform film, which could be regarded as a solid crystal, a tightly pleated film, and two different assemblies of nanoislands," explains Dr. Stankov and adds: "A nanoisland is a discrete cluster of self-organized atoms on a surface reaching sizes of several tens of nanometres with a height of a dozen or so nanometres. It turned out that especially interesting are the samples in which the EuSi2 nanoislands are completely isolated from each other and those where the nanoislands are in close contact with each other."

The samples were prepared in the ultra-high vacuum system at the nuclear resonance beamline of the ESRF synchrotron in Grenoble by the KIT group and investigated in situ by nuclear inelastic scattering (NIS).

"NIS is a state-of-the-art method for direct measurement of the energy spectrum of atomic vibrations of nanomaterials with very high resolution. In this experimental technique the sample is illuminated with high energy photons, selected so that their absorption by atomic nuclei excites or annihilates lattice vibrations of a certain kind, yielding the element-specific phonon density of states," adds Dr. Stankov.

Theoretical studies at the IFJ PAN were carried out ab initio, based on the fundamental laws of quantum mechanics and statistical physics, using PHONON software written by Prof. Krzysztof Parlinski (IFJ PAN). The Cracow group dealt not only with modelling the vibrations of the crystal lattice of structures of europium silicide, but also determining the conditions for conducting experiments in the ESRF synchrotron.

"In Grenoble only the vibration energies of europium atoms were recorded. The curves obtained from the measurements agreed very well with our calculations for the solid crystal and the surface. We could supplement these data with our predictions for the movements of silicon atoms, which helped to better interpret the results," says Prof. Parlinski.

Particularly interesting results were obtained for the samples with nanoislands. In the case of a substrate coated with discrete nanoislands a significant increase of the amplitude of vibration of europium atoms was observed, up to 70% relative to the vibrations in the crystal. Such a large increase translates into significantly greater possibilities in the field of heat transfer. The most interesting effect appeared, however, in the sample with nanoislands adjoining each other. Namely, additional vibrations with a characteristic energy were found at the interfaces between the nanoislands. Although theoretically predicted earlier on, their existence was confirmed experimentally for the first time. They constitute another 'gateway' through which material can discharge heat into the environment. By means of the adjoining nanoislands a significant increase in the efficiency of heat transfer in nanostructures becomes a reality.

"In the analysis of materials scientists usually look at the properties of a sample of fixed morphology. We have described a whole spectrum of possible surface morphologies of EuSi2. An advanced theoretical model and precise measurements have allowed us for the first time to exactly trace how the vibrations of the crystal lattice of a nanomaterial change depending on its arrangement on the substrate," stressed Dr. Piekarz.

The research on europium silicide nanostructures, funded by the Helmholtz Association, the Karlsruhe Institute of Technology (project VH-NG-625) and on the Polish side by the HARMONIA grant from the Polish National Science Centre, is of a basic nature. However, the knowledge gained, especially with regard to the crystal lattice vibrations occurring at the interface between adjacent nanoislands and the related drastic changes in the heat transport, is universal. After suitable adaptation, this phenomenon will allow researchers to design nanomaterials other than europium silicide with tailored thermal properties.

Microscopic images of the europium silicide nanoislands on the silicon surface. The nanoislands are completely isolated (left) or adjoining each other (right). (Source: IFJ PAN)