Nuclear Surfing: Protons have been observed 'catching a wave' on the surface of an atomic nucleus 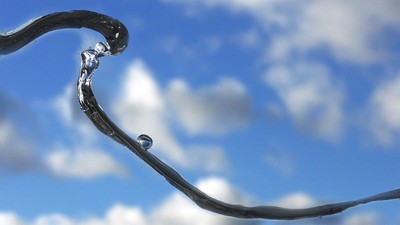 Like a surfer on a wave, a proton can be coupled with the vibrations of an atomic nucleus. Pictured in the role of proton is a bubble of air graphically pulled out from under the surface. (Source: IFJ PAN, jch)

For surfers, it's not enough just to wait for the right wave: they still have to know how to catch it. As it turns out, one challenge faced by surfers also applies to protons. An experiment recently conducted by physicists from Poland, Italy and France provided new information on surfing taken to its absolute extreme: protons synchronizing their movement with the vibrations of atomic nuclei.

We can say a lot of things about atomic nuclei that are more or less certain, but we know this much for sure: nothing about their nature is boring, despite how we were taught about it in high school. As proof of this we can look at a recent experiment which studied how protons in atomic nuclei can, in their own way, take part in a popular sport. A team of researchers from the Italian Universita' degli Studi di Milano (UniMi), and the Institute of Nuclear Physics, Polish Academy of Sciences (IFJ PAN) in Cracow along with broad international cooperation, measured, for the first time, the time needed for a single proton in a nucleus to synchronize with the oscillations of the nucleus. The achievement can be illustrated with an analogy: some protons can 'surf' on top of a nucleus, and we finally know how long they have to wait to catch the wave.

Atomic nuclei contain from one proton to more than 200 protons and neutrons, and, like atoms, they can absorb and emit certain amounts of energy. In atoms, these processes are accompanied by the transitions of electrons between orbitals, lying further or closer to the nucleus and grouping in the electron shells. Like the electrons around the nucleus, protons and neutrons of the same nuclei are in constant motion. Although they do not revolve around the highlighted point, it turns out that we can talk about the existence in the nuclei of certain shells with well-defined energies. On the whole, the space in these shells may be occupied by both protons and neutrons. Some shells, however, are reserved for protons, and others only for neutrons.

To jump to an adjacent layer may sometimes require absorbing or emitting a large amount of energy (this occurs particularly when the shells are full). If the available energy is less, the nucleus can still change its energy state, but in a more sophisticated way: it starts to vibrate. It is known that in such situation the proton or neutron may couple with the oscillation of the nucleus. At first glance, the phenomenon seems very abstract. Meanwhile, a similar mechanism plays a major role in a popular, iconic sport. That is, as we already mentioned, surfing.

"Surfers can wait a long time for the right wave. But when it does come along, it doesn't always mean a good time is guaranteed! If the surfer just gawks at it, it will pass, and he just pops up on the surface like a cork. The real fun only comes if he can time his jump onto the wave. Good surfing depends on a precise harmonization between surfer and wave. In a similar way, under appropriate conditions protons 'jump' on the surface oscillations of the atomic nucleus and travel with them. And I think they're more natural surfers than people are: after all, they do it under extreme conditions and they don't need a board...", explains Prof. Bogdan Fornal (IFJ PAN).

Coupling of the proton with the vibration of the nucleus is difficult to study because there must be a system where a single proton is outside a shell which is completely filled with numerous protons and neutrons. To observe the 'proton surfers', the Italian-Polish team conducted an experiment in the laboratory of the Institut Laue-Langevin in Grenoble, in which millimeter-sized lumps of uranium 235U and plutonium 241Pu were irradiated with neutrons. In order to increase the chance of capture by atomic nuclei, the neutrons were slowed considerably. When a neutron joined the nucleus of the target, the system became unstable and fell apart in different ways. Among the decay products were excited nuclei of antimony 133Sb.

"The nucleus of antimony 133Sb is basically the nucleus of tin 132Sn with an extra proton. Tin 132Sn is special: it contains 50 protons and 82 neutrons, exactly enough to completely fill the neutron and proton shells. In this nucleus - what we call a doubly magic nucleus - a jump from shell to shell requires emission or absorption of large amounts of energy. Antimony 133Sb was so interesting for us, because it gives us a loosely bound proton and a compact core which is prone to fall into vibrations, and that's an ideal system for testing coupling," explains Prof. Fornal.

The nuclei of antimony 133Sb rid themselves of excess energy by emitting gamma quanta of several specific energies. In the experiment the radiation was recorded, and the results were compared to theoretical predictions. In this way, it was established through which energy states the nucleus of 133Sb returned to the ground state. The scientists found that the decay path consists of two parts: one with an uncoupled proton and the other with a proton coupled with the oscillations of the nucleus. The collected data show that when it comes to coupling, the nucleus loses energy quickly, and the same coupling is retained for all subsequent steps down the ladder of energy.

"We first measured the time required for the proton to couple with the core oscillations. As a result, we know that when the proton jumps on the wave, it behaves like a champion surfer: it stays on till the wave crashes, that is, until the nucleus reaches the ground state. What gives the proton the most difficulty are the transitions between uncoupled and coupled states, that is, getting on the wave," says Prof. Fornal.

Interestingly, several protons can join together and couple to the oscillation of the shells. They then form a kind of group, one that acts in a very intricate manner, engaging not only with the waves but also among themselves.

The results of the experiment (on the Polish side funded by grants from the National Science Centre) are important in the context of further research into neutron-rich nuclei. Science now knows of 258 stable nuclei and approximately 3,000 unstable ones - roughly as many as all the known exoplanets. It is predicted that the atomic nuclei number in total 7 to 9 thousand. So at least twice as many nuclei as we have come to know throughout the entire history of nuclear physics are still waiting to be discovered and explored. A single, consistent model of the atomic nucleus would be extremely helpful in that search, but interactions in atomic nuclei are so complicated that even after decades of ongoing concerted efforts, such a model has yet to be created.

It's very easy for a schoolteacher to describe, for example, electrostatic interaction between two bodies with electrical charges, because there are only two charges, and the force between them depends only on their mutual distance. Protons and neutrons in the nucleus are bound by strong interaction, but strong interaction depends not only on the distance between each pair of interacting nuclear particles, but also on the constantly changing mutual orientation of their spins (angular momentum). In addition, nuclei are heavy elements incorporating not only two particles but a significant number of protons and neutrons, all interacting with each other and each moving in a field produced by the others. The entire system is so complicated that so far only approximate models have been built, each of which describes only some aspects of nuclear reality reasonably well. In this situation, any qualitatively new experimental measurements are extremely important.

"Our joint experiment at the ILL has provided my group with data which have made it possible to construct a new model to better describe the coupling of the protons with the oscillating nucleus. For the first time, we can, for example, calculate in this case the probabilities in which excited nuclei de-excite individual energy states. As a result, we can better predict the properties of nuclei with a greater excess of neutrons, including those which are just waiting to be discovered," concludes Prof. Silvia Leoni (UniMi).

The model, built and designed based on the experience of physicists from UniMi and IFJ PAN, is a significant step towards (among other matters) a better understanding of the mechanisms responsible for the formation of elements heavier than iron in the Universe (i.e., elements formed in the process initiated by the rapid capture of neutrons emitted in large amounts during supernova explosions). Another potential area of application of the model is nuclear power. Its use here could help to better predict how the nuclei formed by the reactions in reactors decay, and thus contribute to further ensuring their safety.

Like a surfer on a wave, a proton can be coupled with the vibrations of an atomic nucleus. Pictured in the role of proton is a bubble of air graphically pulled out from under the surface. (Source: IFJ PAN, jch)