Photon Collisions: Photonic billiards might be the newest game! 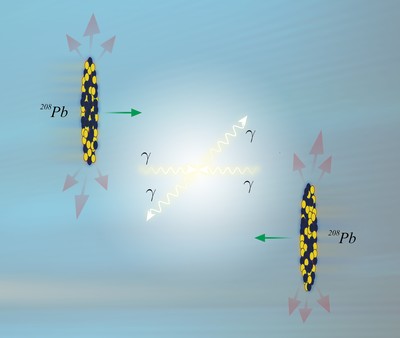 Ultra-peripheral collisions of lead nuclei at the LHC accelerator can lead to elastic collisions of photons with photons. (Source: IFJ PAN)

When one snooker ball hits another, both spring away from each other in an elastic manner. In the case of two photons a similar process – the elastic collision – has never been observed. Physicists from the Institute of Nuclear Physics of the Polish Academy of Sciences have shown, however, that such a process does not only occur, but even could soon be registered in heavy ion collisions at the LHC accelerator.

When photons collide with each other, do they act like billiard balls, springing away from each other in different directions? Such a course of interaction between particles of light has never been observed, even in the LHC, the most powerful accelerator in the world. An observation may, however, happen soon, thanks to a highly detailed analysis of the course of events in such a collision, conducted by physicists from the Institute of Nuclear Physics of the Polish Academy of Sciences (IFJ PAN) in Krakow, Poland, and just published in the journal Physical Review C.

Preliminary analysis of the elastic scattering of a photon-photon collision was presented several years ago in a study by scientists from the European Organization for Nuclear Research (CERN). Krakow scientists, however, funded by a grant from the Polish National Science Centre, have examined the process in much finer detail. Not only has it been established that collisions occur, but it has also taken into account more mechanisms of interaction between photons and predicted the directions in which most photons will scatter post-collision – and whether they can be measured. The results suggest that at least some of the photons deflected as a result of elastic collisions should hit the detectors installed by the ATLAS, CMS and ALICE projects. If the described phenomenon actually occurs, and by all appearances it will, observation would become possible within the next few years.

“Elastic collisions of photons with photons seemed, until recently, very unlikely. Many physicists regarded the registration of such collisions in the LHC as impossible. Meanwhile, we have proven that the phenomenon can be seen, though not in the collisions of protons, which occur much more frequently”, says Prof. Antoni Szczurek (IFJ PAN).

The LHC collides beams of protons with protons, or lead nuclei beams with lead nuclei. The IFJ PAN had shown earlier that if the collisions of protons occurred for elastic collisions between photons, the process would not be visible: it would obscure photons emitted by a different mechanism (initiated by gluons, the particles carrying the strong nuclear force). Luckily, the Polish scientists had some other ideas in store.

According to the rules of classical optics, light cannot be affected by light. Photons, however, can interact with each other through quantum processes. When two photons fly next to each other within that extremely short instant there is nothing preventing the creation of 'virtual' loops of quarks or leptons (which include electrons, muons, tau particles, neutrinos and the antiparticles associated with them). Such particles would be termed virtual, as they would be impossible to see. However, despite this they would be responsible for the interaction between photons, after which they would again be transformed into 'real' photons. To the outside observer, the whole process would look like one photon reflected by the other photon.

Unfortunately, the energy of the photons generated by even the most powerful contemporary light sources can be registered only in millions of electron volts. These are miniscule values, even by the standards of modern nuclear physics and particle physics. At these energies, the probability of a collision with a photon-photon process involving quantum is infinitesimal, and the streams of photons necessary for its occurence would have to be colossal.

“In this situation, we decided to see whether elastic collisions of photons involving virtual particles can occur during collisions of heavy ions. And it worked! Large electric charges in the nuclei of lead may in fact lead to the creation of photons. If the process occurs in collisions of nuclei which have just passed, the photon generated by one nucleus has a chance to collide with photons produced by the second. We calculated that the probability of such a course of events is admittedly small, but nonzero. So everything indicates that the process could be observed”, says Dr. Mariola Klusek-Gawenda (IFJ PAN).

Interestingly, the collisions studied theoretically by Krakow physicists were very specific, as they did not analyze direct collisions of lead nuclei with one another as such, but processes without direct contact between nuclei. Interaction occurs between the electromagnetic fields of two atomic nuclei, which can fly even from long distances between them. These collisions are known as ultra-peripheral.

Potentially, photons can interact with each other as a result of another process: when a quantum transforms into virtual mesons, or quark-antiquark pairs. The mesons produced could interact with each other via the strong nuclear force, the fundamental force responsible for binding quarks inside protons and neutrons. The physicists from the IFJ PAN were the first to present this mechanism. It seems, however, that the observation of light collision with his participation at the event will not be possible: the gentle photons bouncing off each other just fly next to the detectors currently operating at the LHC.

The study of photon-photon elastic collisions not only provides a better understanding of the physics we already know. Quantum processes carrying the interaction between photons could potentially be involved as elementary particles, something we do not yet know. So if measurements of elastic scattering of photons off photons provided results other than those predicted by Krakow physicists, this could be a signal leading to a completely new physics engaged in the phenomena.

Ultra-peripheral collisions of lead nuclei at the LHC accelerator can lead to elastic collisions of photons with photons. (Source: IFJ PAN)