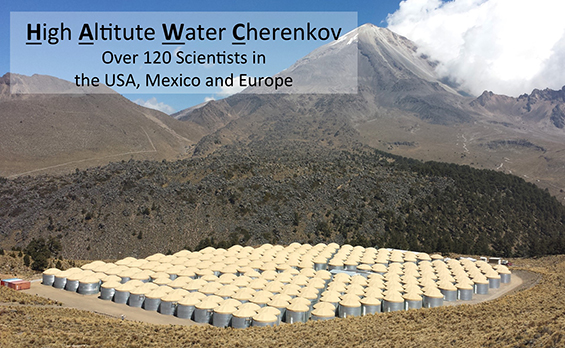 The HAWC gamma ray observatory. The picture shows 300 Water Cherenkov Detectors, covering an area of four football fields, and in the middle of the array, the electronics building. In the background is Pico de Orizaba, tallest mountain in Mexico

With HAWC, scientists can observe the aftermath of the death of massive stars (supernova remnants), glowing clouds of electrons around rapidly spinning neutron stars (pulsar wind nebulae) and supermassive black holes in other galaxies that are devouring matter and spitting out powerful jets of particles (blazars). Astrophysical laboratories like these probe physics in a way that is not possible on Earth. HAWC observations allow the understanding of these objects as well as testing for new physics such as black hole evaporation and the search for dark matter.

HAWC uses 300 large water tanks (200,000 liters each), at a high-altitude site in Mexico, to detect particles at the ground level that are produced by very-high-energy gamma rays striking the upper atmosphere. Particles traveling through the water tanks produce faint blue light (Cherenkov light) that is captured by HAWC’s sensors inside the tanks. This design, along with the high altitude, enables 15 times better sensitivity than HAWC’s predecessor, Milagro. “Unlike traditional telescopes, with HAWC we have now an instrument that surveys two thirds of the sky at the highest energies, day and night”, said Andrés Sandoval, Mexico-spokesperson for HAWC.

HAWC was completed in March 2015, and scientists are now presenting results from its first year of operation. The new gamma-ray sky map shows many objects along the plane of our Galaxy, the Milky Way, several of which have not been previously observed. “HAWC is making new discovery in the high energy sky and it's only the beginning” said Michelle Hui, a scientist presenting HAWC results at the American Physical Society April meeting.

HAWC is an international collaboration consisting of over 120 scientists from 25 universities and national labs. HAWC was built with the support of the National Science Foundation and Department of Energy in the USA, and Consejo Nacional de Ciencia y Tecnología in Mexico. For more information visit: http://hawc-observatory.org or visit our Facebook page https://www.facebook.com/hawcobservatory. The Institute of Nuclear Physics in Krakow is deeply involved in the analysis of multi TeV data from the HAWC detector. Dr Salesa Greus and Dr Casanova are in fact key persons in the analysis of the data from one of the most prominent source in the multi-TeV sky, the pulsar wind nebulae, Geminga. 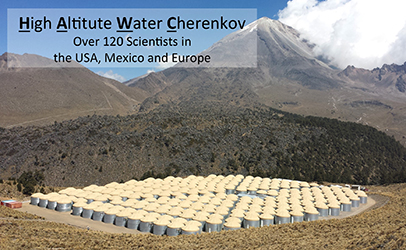 The HAWC gamma ray observatory. The picture shows 300 Water Cherenkov Detectors, covering an area of four football fields, and in the middle of the array, the electronics building. In the background is Pico de Orizaba, tallest mountain in Mexico

A view of 2/3 of the entire sky with very-high-energy gamma rays observed by HAWC. Clearly visible are many sources in our own galaxy, the Milky Way, as well as two other galaxies: Markarian 421 and Markarian 501. Some well known constellations are shown as a reference. The center of our own Galaxy is towards Sagittarius 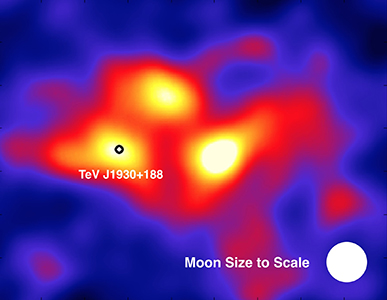 A zoom into a region in the Milky Way. A previously known gamma ray source, probably a pulsar wind nebula, is indicated in the figure. The new HAWC data shows that this region is far more complicated than originally thought