Do we see the trailer for the upcoming blockbuster of LHC? 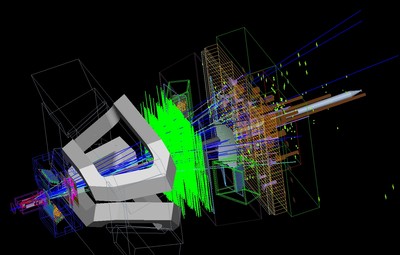 Computer simulation of rare decay of Bs meson to J/psi and phi mesons in LHCb detector at CERN. (Source: CERN)

In light of the latest analysis on the decay of beauty mesons, the dawn of a new era, that of 'new physics', may be approaching. An important contribution to the analysis has been made by physicists from the Institute of Nuclear Physics of the Polish Academy of Sciences (IFJ PAN) from Poland.

We can’t call it a discovery. Not yet. However, there are some indications that physicists working at the LHC accelerator at the European Organization for Nuclear Research (CERN) near Geneva may see the first traces of physics beyond the current theory which describes the structure of matter. This indication emerges from the latest analysis of data collected by the LHCb experiment in 2011 and 2012. Physicists from the Institute of Nuclear Physics of the Polish Academy of Sciences (IFJ PAN) in Kraków, Poland, have made important contribution to the analysis.

“To put it in terms of the cinema, where we once only had a few leaked scenes from an much-anticipated blockbuster, the LHC has finally treated fans to the first real trailer,” says Prof. Mariusz Witek (IFJ PAN).

To describe the structure of matter on the scale of elementary particles we use the Standard Model, a theoretical framework formulated in the 1970s. Particles we now consider as elementary play various roles. Bosons are carriers of forces: photons are related to electromagnetic interactions, eight types of gluons are responsible for strong interactions, and W+, W– and Z0 bosons mediate weak interactions. Matter is formed by particles called fermions, which are divided into quarks and leptons. In the Standard Model, there are six types of quarks (down, up, strange, charm, top and bottom) and six types of leptons (electrons, muons, taons and their three corresponding neutrinos) as well as 12 antiparticles associated with them. The recently discovered Higgs boson provides particles with mass (all except the gluons and photons).

“Up to now all measurements match the predictions of the Standard Model. However, we know that the Standard Model cannot explain all the features of the Universe. It doesn’t predict the masses of particles or tell us why fermions are organized in three families. How did the dominance of matter over antimatter in the universe come about? What is dark matter? Those questions remain unanswered. What's more, the force we all experience every day, gravity, isn’t even included in the model,” says Prof. Witek.

So far the scientists working at the LHC have been concentrating on the search for the Higgs boson (the ATLAS and CMS experiments), working out the differences between matter and antimatter (the LHCb experiment) and testing quark-gluon plasma (the ALICE experiment). Now more attention is being paid to detecting new elementary particles beyond the Standard Model. The ATLAS and CMS experiments are trying to see such particles directly. However it cannot be ruled out that the mass of the new particles is just too high to be produced at the energies of the LHC accelerator. Then the only way of discovering new physics would be to observe the influence of new particles on phenomena we observe at lower energies. Such influence might manifest in modifying the frequency of the decay of beauty mesons or the angular distributions of their decay products.

In 2011, shortly after gathering the first large samples by the LHCb experiment, a puzzling anomaly regarding the beauty meson was noticed and announced on public site of LHCb. These mesons are composed of a light quark, which we can find in protons and neutrons that form the matter around us, as well as a heavy beauty antiquark, which can be created in the LHC collider. The particles, made up of pairs of quark-antiquark, are unstable so they decay rapidly.

An anomaly was observed in the decay of a B meson containing two muons among its products. In describing the final state of this decay, up to eight parameters are needed. They define the angular distribution of decay products, that is, at what angles they will be flying. The traditional method of determining these parameters may lead to false results for the small number of such decays observed. Dr. Marcin Chrząszcz from IFJ PAN, one of the main authors of the analysis, proposed an alternative method in which each parameter was determined independently of the others.

“My approach can be likened to determining the year when a family portrait was taken. Rather than looking at the whole picture, it is better to analyze each person individually and from that perspective try to work out the year the portrait was taken,” explains Dr. Chrząszcz.

The latest analysis, on the Polish side financed by the National Science Centre and a Diamond Grant awarded to Dr. Chrząszcz, is important not only for its accuracy. The results of data from 2011 have been confirmed by data from 2012. This increases the likelihood that physicists have encountered a genuine phenomenon rather than unforeseen artefact of the measurement.

“While searching for new phenomena or new particles, it is assumed that when the effect differs from prediction of a given theory by more than three standard deviations – 3 sigma – that is an indication, but we cannot talk of a discovery until the rate of accuracy rises to above 5 sigma. To put it slightly differently, 5 sigma means that we have a probability of less than one to three-and-a-half million that random fluctuations can provide a result like that seen. At the presently observed number of such decays the accuracy of our analysis has reached a deviation of 3.7 sigma. So we still cannot make claims of a discovery, but we certainly have an interesting clue,” says Dr. Chrząszcz.

What could be the reason for the observed effect? The most popular hypothesis among theorists is the existence of a new intermediate Z-prime boson (Z') involved in the decay of B mesons. It also explains another, slightly weaker effect observed in other decays of B mesons to measure what is called lepton universality. Still, it is not an inconceivable explanation of the effect in the framework of the Standard Model: perhaps the theoretical calculations do not take into account some important factors affecting the decay mechanism.

The LHC has recently began another round of colliding protons at higher energy levels, by the end of which physicists will have at their disposal another batch of data to analyze. Will the new physics then become a reality?

As Prof. Witek sums it up: “Just like it is with a good movie: everybody wonders what’s going to happen in the end, and nobody wants to wait for it”.

Computer simulation of rare decay of Bs meson to J/psi and phi mesons in LHCb detector at CERN. (Source: CERN)