Cold crystallization has a dual nature 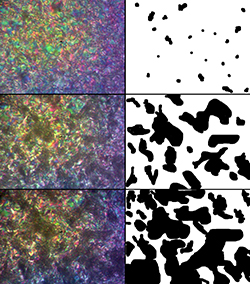 In some vitrous substances, when heated, not one, but two physical mechanisms are reponsible for crystallization, as scientists working at the Insitiute of Nuclear Physics in Krakow, Poland, have discovered. The first-time use of numerical image processing to assess the degree of crystallization of liquid crystals led to the surprising results.

Organic substances present in pharmaceutical products should in general be in a glassy form. It may happen, though, that under long-term storage the compounds may crystallize, and a drug loses its therapeutic properties. In order to better understand the fundamental processes that occur during such transfrmations, scientists from the Institute of Nuclear Physics of the Polish Academy of Sciences (IFJ PAN) in Krakow, Poland, conducted a series of studies on a particular type of crystallization which occurs during the heating of a certain type of liquid crystals. The results, recently published in the prestigious crystallography journal Crystal Growth & Design, revealed an unexpected dual nature of the process studied.

“Crystallization is most often associated with the process of cooling. However we know of another, quite counter-intuitive, phenomenon: some compounds under certain conditions begin to crystallize as temperatures rise. This effect is known as cold crystallization, and we observed it nearly 20 years ago in liquid crystal substances which have a tendency to vitrification,” explains Prof. Maria Massalska-Arodź (IFJ PAN).

Liquid crystals are liquids wherein the elongated molecules have some kind of ordering, generally found in ordinary crystals. The simplest nematic liquid crystal can therefore flow, but its molecules in fairly large clusters are oriented in space in one direction. At the same time they are distributed at random distances to each other (in contrast to ordinary crystals, where they lie in the crystal lattice nodes).

Scientists from the IFJ PAN analyzed changes in the arrangement of elongated molecules of one of the liquid crystals (4CFPB), which easily underwent vitrification in the nematic phase.

“Selecting nematic liquid crystals as an object of study was not accidental. When we view them using a polarizing microscope, they show multicolored areas arranged in a characteristic texture. We wanted to see if graphic evaluation of changes in the texture during heating of nematic glassy phase might reveal valuable information about the process of crystallization,” says PhD student Tomasz Rozwadowski (IFJ PAN).

Physicists from the IFJ PAN performed a series of experiments looking at a change which occurs in liquid crystal as it undergoes heating with a constant rate of temperature rise. In first experiment it was only one degree Kelvin per minute while in the final one it was as high as 50 degrees per minute.

The degree of crystallization obtained by numerical analysis of polarizing microscope images was compared to data collected at the same time by two conventional methods, calorimetery and dielectric spectroscopy. The results proved to be consistent, confirming the usefulness of the graphic evaluation of texture changes in the study of crystallization and allowing scientists to describe the process with high reliability. And this is where the researchers found a surprise.

“If cold crystallization was a phenomenon governed solely by thermodynamics, it would be enough to keep the temperature just below 275 degrees, in order to safeguard the substance against uncontrolled transformation. Now we know that sometimes the process of diffusion of molecules begins to play a decisive role, and at lower rates of heating a nematic, crystalline arrangement appears at lower temperatures. Cold crystallization can therefore occur in a fairly wide range of temperatures, under conditions which were previously unexpected,” says Prof. Massalska-Arodź.

Scientists working at the IFJ PAN are making important contributions to the science of crystals, well befitting the great Polish tradition of this art. Today’s electronics industry owes its very existence to Jan Czochralski’s discovery of a method for the production of monocrystals in 1916, where crystals are “extracted” from molten material using a rod touching the surface of the liquid. Today, crystals grown by the Czochralski process are used in virtually every corner of the planet, and some of them on board spacecraft venturing far beyond Solar System. 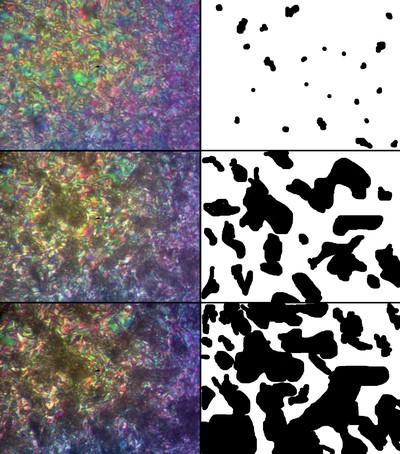