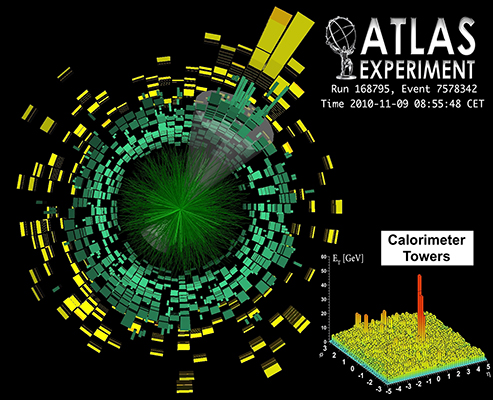 Narrow particle streams (jets) recorded by the ATLAS Dectector in a single collision of lead nuclei. Jets, seen in indicated cones in the main figure (and as a narrow stream of particles on the bottom right of the figure), diverge in directions nearly perpendicular to the direction of the colliding beams of lead nuclei (which is perpendicular to the plane of the image). (Source: ATLAS Experiment© 2014 CERN)

Shortly following the Big Bang, the Universe was filled with a chaotic primordial soup of quarks and gluons, particles which are now trapped inside of protons and neutrons. Study of this quark-gluon plasma requires the use of the most advanced theoretical and experimental tools. Physicists from the ATLAS experiment at the Large Hadron Collider (LHC) has taken one crucial step towards a better understanding of the plasma and its properties, and recently published the results of their latest analysis.

When the LHC accelerator at the world’s largest laboratory in CERN, Geneva, collided two lead ions travelling at nearly the speed of light, for a fraction of a second ordinary matter was transformed into the most exotic state of matter known to physics: quark-gluon plasma. Analysis of the streams of particles penetrating the plasma has led to new findings about the properties of the plasma, and was recently published in the prestigious journal Physical Review Letters by the international team of physicists working at the ATLAS detector.

Immediately following the Big Bang and the formation of space-time, the Universe was filled with matter of extraordinary properties. Quarks and gluons, today only found bound within protons and neutrons, bounced about freely, comprising a homogenous ‘soup’. This exceptional state of matter, appearing only at temperatures of billions of degrees, has been recreated by physicists at the LHC accelerator by colliding heavy lead ions.

Study of the quark-gluon plasma poses an enormous challenge. It appears only rarely during collisions, in extremely minute quantities, and then only for a fraction of a second. It immediately begins to expand under its own pressure, rapidly cools and transforms itself into an avalanche of ordinary particles. Modern physics has no tools at its disposal to directly observe quarks and gluons. We cannot simply proceed with the usual methods of measurement, like inserting a thermometer into the plasma and waiting a few minutes for the results. Much more refined methods are needed.

“Fortunately detectors like the ATLAS detector have suceeded in recording the decay products of particles which have interacted in the quark-gluon plasma. By carefully analysing the properties of those particles, we can come to guarded conclusions about the features of the plasma,” says Prof. Barbara Wosiek of the Institute of Nuclear Physics of the Polish Academy of Sciences in Kraków, Poland, who coordinated and approved the analysis of data gathered by the ATLAS detector in 2011. The analysis was performed by a team from Columbia University.

Most of the information we have on the quark-gluon soup is provided by particles that disperse sideways as the result of a collision. As they move in this specific direction, crosswise to the initial direction of flight of the lead nuclei, it makes it relatively easy to distinguish them from thousands of other particles and assures that they resulted from the early stage of the collision. If so, immediately after the collision they had to traverse through the quark-gluon cloud, to then collapse into a concentrated narrow stream of particles, known as jets.

“These initially produced particles lose energy while going through the hot, dense plasma soup, which leads to extinguishing the high-energy jets. Through our analysis we go about reconstructing jets of an extremely high energy level, reaching 400 gigaelectronvolts”, adds Prof. Wosiek.

After gathering the data on the reconstructed jets in the collision of lead nuclei, the team of physicists can correlate and compare the results with those obtained from proton-proton collisions. The idea behind such a comparison is quite simple. From a precise enough theoretical consideration it is expected that quark-gluon plasma will not arise in a proton-proton collision. In turn, theoretical models of heavy ions in collision predict the formation of dense plasma in a head-on ion-ion collision of extremely high energy. Comparison of results from the data analysis of both types of collisions enables evaluation of how the jets are disturbed by the presence of plasma.

“In collisions of the lead nuclei we recorded up to half the number of jets as in the proton-proton collisions. This indicates that the particles ensuing from the intial collision lose energy as they interact with the plasma, and the high-energy jets are thus extinguished. It is an important result, because it allows us to discard some of the theoretical models of quark-gluon plasma which do not provide for such a high rate of suppression”, explains Prof. Wosiek.

The ATLAS detector, built from the start with the help of Polish institutions, including the Institute of Nuclear Physics, is an extraordinarily sophisticated instrument the size of a multi-storey building. The data it collects on particle collisions flows through over one hundred million electronic channels and during a typical measurement 99% of them work properly.

Studies of lead ion collisions are only one element of the research undertaken by the international group of scientists experimenting at the LHC accelerator. The main research programme is carried out with proton-proton collisions to put the current theory of particle physics, the Standard Model, to the test, as well as to explore phenomena going beyond the Standard Model. The most spectacular success of the physicists working on the ATLAS and CMS detectors at the LHC has been the discovery, after a half-century search, of the elusive and now famous Higgs boson. 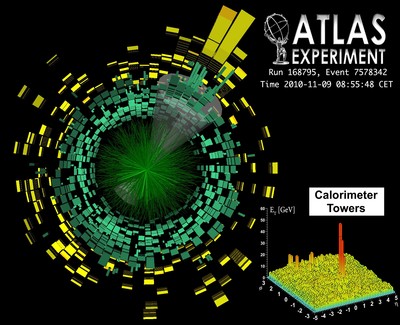 Narrow particle streams (jets) recorded by the ATLAS Dectector in a single collision of lead nuclei. Jets, seen in indicated cones in the main figure (and as a narrow stream of particles on the bottom right of the figure), diverge in directions nearly perpendicular to the direction of the colliding beams of lead nuclei (which is perpendicular to the plane of the image). (Source: ATLAS Experiment© 2014 CERN) 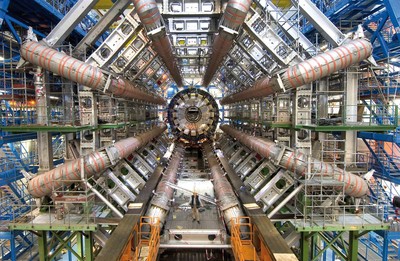 Inside view of the ATLAS Detector at the LHC accelerator at CERN near Geneva. (Source: ATLAS Experiment© 2014 CERN) 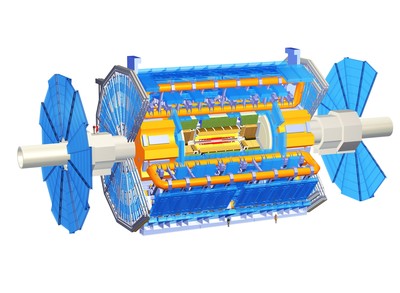