Space travel is a bit safer than expected 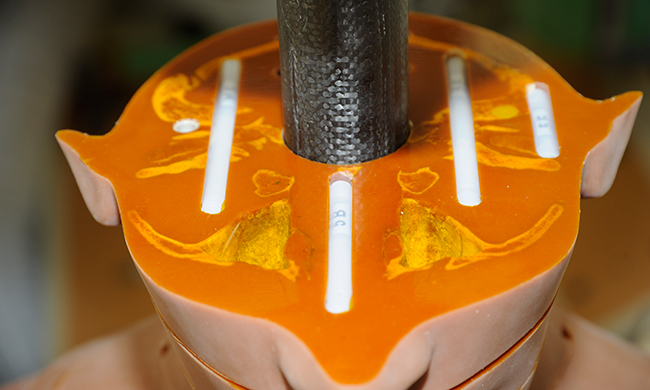 Interior structure of the phantom used in the experiment MATROSHKA. White tubes contain sets of thermoluminescent detectors. Half of these detectors was manufactured by the Institute of Nuclear Physics of the Polish Academy of Sciences in Kraków, Poland. (Source: DLR)

Analysis of data from the MATROSHKA experiment, the first comprehensive measurements of long-term exposure of astronauts to cosmic radiation, has now been completed. This experiment, carried out on board and outside of the International Space Station, showed that the cosmos may be less hostile to space travellers than expected.

Among the many life-threatening hazards to the space traveller, cosmic radiation is a major one, considerably limiting the time astronauts may spend in space without incurring excessive risk to their health from too high a dose of this ionizing radiation. To determine the actual doses of radiation which astronauts undergoing long-term space travel are exposed to, the European Space Agency (ESA) in collaboration with research institutions from Germany, Poland, Austria, Sweden and Russia, designed and carried out the MATROSHKA experiment. A phantom closely mimicking the human body was fitted with several thousand detectors, most of which were manufactured at the Institute of Nuclear Physics of the Polish Academy of Sciences (IFJ PAN) in Kraków, Poland. These detectors recorded the doses from cosmic radiation inside the International Space Station and outside – in open space – over a few years. The painstaking analysis of the MATROSHKA data has just been completed, yielding somewhat unexpected results.

“One may say that we found open space to be a bit less hostile to humans than expected. The effective doses, related to the health risk of the astronauts and calculated from measurements with our detectors, were lower than those indicated by dosimeters worn by the astronauts”, says Dr. Paweł Bilski, an Associate Professor at IFJ PAN.

A specially adapted humanoid phantom used in medical research, in which real human bones were placed inside a plastic “body” simulating the shapes and densities of soft tissues or lungs in the human body, was used to measure doses of cosmic radiation. The mannequin (a torso without legs) consisted of 33 slices of 2.5 cm thickness each. The measuring equipment was located inside these slices and included sets of passive thermoluminescent detectors placed in plastic tubes. Thus, a three-dimensional rectangular grid of measurement points was created inside the phantom by six thousand thermoluminescent detectors. Over three thousands of these detectors were manufactured at the IFJ PAN. This experimental design enabled the researchers to accurately determine the spatial distribution of dose inside the phantom, to evaluate doses absorbed in particular organs of the human body, and finally to establish the value of the so-called effective dose, which is considered to be an estimate of the radiation hazard to humans.

The dopants spoil the regular structure of the crystal lattice of lithium fluoride in the thermoluminescent detector and create additional forbidden energy levels, which may act as traps for free electrons created by cosmic radiation in this lattice. The number of such trapped electrons gradually increases with dose absorbed in the detector. When the exposed detector is next heated in the laboratory, the trapped electrons are released and emit light, the amount of which is proportional to the dose absorbed in the detector, and can be accurately measured.

The main hazard to the astronaut’s health due to exposure to cosmic radiation is the increased probability of developing cancer in his or her body. This probability however is quite dependent on the type of radiation the astronaut is exposed to. Most of the natural sources of ionising radiation on Earth produce electromagnetic radiation of high energy – gamma rays. On the other hand, in cosmic rays, energetic protons or heavier ions dominate, which are much more effective in creating cancer cells. Thermoluminescent detectors are unable to distinguish between gamma rays or ions, therefore the phantom was also equipped with plastic track detectors in which tracks of protons or heavier ions could be measured.

The mannequin on board of the International Space Station (ISS), with thermoluminescent and plastic detectors inside its “body”, was also dressed in a “poncho” with additional detectors, simulating the personal dosimeters worn by astronauts. Thus, doses recorded by individual dosimeters of the ISS crew could be compared with those actually absorbed inside their bodies.

Over the years 2004-2009 the MATROSHKA mannequin underwent three exposures to cosmic radiation, each lasting a year of more. Two of these exposures occurred inside the Russian modules of the space station and for one exposure the phantom, in a container imitating the shielding properties of a spacesuit, was placed in open space outside the ISS. Such measurements have never been done before.

After returning the detectors to Earth, their painstaking readout and analysis of the complete data set gathered within the MATROSHKA experiment were carried out by teams of scientists at the IFJ PAN in Kraków, the German Aerospace Center (DLR) in Cologne and at the Technical University of Vienna. Their overall conclusion was that the individual dosimeters worn by the crew inside the ISS overestimated the actual dose measured inside the phantom by about 15%. However, in open space this overestimation exceeded 200%.

“We must remember that measurements within the MATROSHKA experiment were performed at low Earth orbit where the Earth’s magnetosphere significantly reduces the number of charged particles from cosmic radiation. In interplanetary space there is no such shielding”, notices Dr. Bilski.

From the results of the MATROSHKA experiment the scientists conclude that travel of astronauts to the Moon or to Mars may be somewhat safer in terms of their radiation hazard than presumed so far. Nevertheless, the doses the space travellers are likely to receive, even though being lower than thought earlier, would still remain dangerously high.

The extensive analysis of the data gathered within the MATROSHKA experiment was supported by the HAMLET project, within the 7th EU Framework programme. The work of the Polish team of scientists was also supported by a research grant from the Polish Ministry of Science and Higher Education. 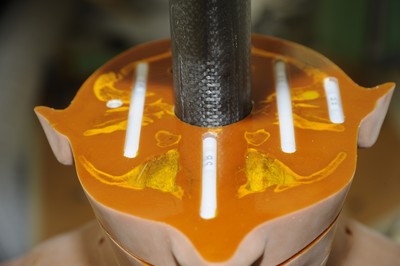 Interior structure of the phantom used in the experiment MATROSHKA. White tubes contain sets of thermoluminescent detectors. Half of these detectors was manufactured by the Institute of Nuclear Physics of the Polish Academy of Sciences in Kraków, Poland. (Source: DLR) 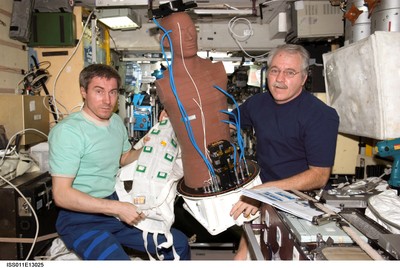 The MATROSHKA phantom presented by astronauts (S. Krikaliew, J. Philips) on board of the International Space Station. (Source: NASA) 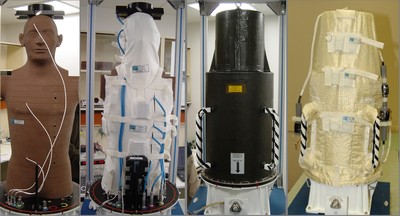 During the exposure in the open space, the MATROSHKA phantom was covered by a container imitation the shielding properties of a spacesuit. (Source: DLR)