How do neutron bells toll on the skin of the atomic nucleus? 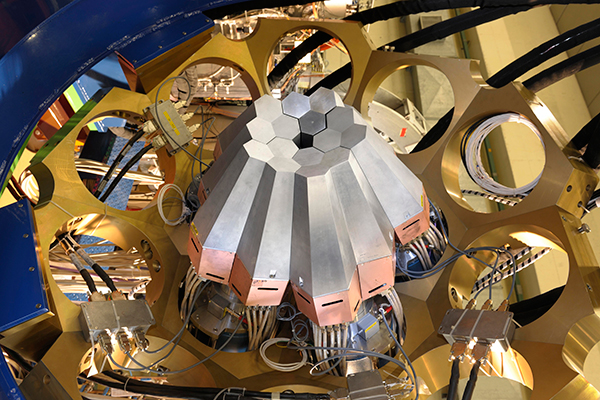 Measurements carried out using the AGATA spectrometer has unravelled the details of neutron oscillations in the atomic nucleus and determined how many neutrons on the surface, or ‘skin’, of the nucleus participate in unique vibrations known as pygmy resonances.
(Source: IFJ PAN)

An international team of physicists has observed – for the first time with such precision – vibrations of the surface of a heavy nucleus, lead 208Pb. Through their extremely accurate measurements this team has unravelled the details of neutron oscillations in the atomic nucleus and determined how many neutrons on the surface, or ‘skin’, of the nucleus participate in unique vibrations known as pygmy resonances.

If an accelerated ion of high energy impacts on the nucleus of a heavy element, it makes the nucleus vibrate in a very special manner: all of its neutrons begin to oscillate collectively with respect to all of its protons. However, close to the point of impact, these constituents of the atomic nucleus may perform additional vibrations on the surface of the nucleus, called pygmy resonances. Up to now, the number of particles on the surface of the nucleus involved in a pygmy resonance – or the number of neutrons particularly affected by the ion impact – was unknown. This mystery could only be resolved by performing extremely precise measurements. Such measurements were possible at the Italian nuclear research facility in Legnaro where an international team of nuclear physicists used for this purpose the recently assembled AGATA gamma-spectrometer of the latest generation.

”One may figuratively compare resonances within the nucleus to what happens during an earthquake, where all buildings vibrate in a more or less consistent rhythm, just like neutrons in a giant resonance. But close to the earthquake’s epicentre, bells on church towers may toll with their own rhythm – in some analogy to a pygmy resonance”, says Prof. Adam Maj at the Institute of Nuclear Physics of the Polish Academy of Sciences (IFJ PAN) in Kraków.

So far in studies on pigmy resonances, heavy nuclei were bombarded by light particles. This could excite the nucleus in many different ways, so it was difficult to unravel the vibration phenomena. But this time, much heavier ions of oxygen 17O were used to bombard lead 208Pb target nuclei. If such ions hit such atomic nuclei, vibration of the target nucleus occurs almost exclusively on its surface.

”The accuracy of the measurements carried out using the AGATA spectrometer was so high that for the first time we were able to 'see' what is happening at surface of the nucleus. As a result, we were able to reliably assess how do neutrons actually vibrate and how many of them take part in the pygmy resonance caused by the collision”, explains Prof. Angela Bracco of the University of Milano.

AGATA (Advanced Gamma Tracking Array) is an ultra-modern instrument for recording gamma radiation, which has recently began operation at the ALPI (Accelerator Lineare Per Ioni) machine located at the Italian LNL (Legnaro National Laboratories), part of the INFN (Italian Institute of Nuclear Physics). Studies using the AGATA spectrometer are carried out by a team of physicists from several nuclear research laboratories in Poland, Italy, Germany, France, Spain, Sweden, Norway and the UK. The Polish group in Legnaro is a team of physicists from the IFJ PAN in Krakow, who have studied nuclear resonances for many years.

”These excess neutrons tend to place themselves at the surface of the nucleus, forming a ‘neutron skin’ which surrounds the protons and the remaining neutrons of the nucleus”, explains Mateusz Krzysiek, a PhD student at IFJ PAN.

It has been known for some decades that if the nucleus of a heavy element is hit by another particle, such as an electron or a helium nucleus (which consists of two protons and two neutrons bound together), the neutrons in the target nucleus will vibrate together with respect to protons in that nucleus. These mutual collective oscillations of protons and neutrons occur with quite a high frequency, therefore with quite a high energy. Physicists call such oscillations the giant dipole resonance. But the nature of oscillations of the neutron skin of the atomic nucleus – whether it oscillates by rocking sideways or whether it ”breathes” back and forth with respect to the centre of the nucleus – remained an open question.

In atomic nuclei which have a neutron skin there is yet another mode of oscillation: the skin neutrons located close to the point of impact will not only take part in their collective motion against protons, but may also vibrate on their own. The energy of this specific vibration is so high that to release it, the nucleus will emit high-energy gamma-ray quanta. Far fewer neutrons are involved in such resonances than in a giant resonance, therefore their gamma-ray signal is much weaker and more difficult to detect. For these reasons such localised vibrations have been termed pygmy resonances.

”Precise measurements of the energy of gamma-ray quanta which we were able to perform with the AGATA spectrometer, helped us to clarify two issues. First, we finally found out how does the neutron skin vibrate: it 'breathes' and does not oscillate sideways. Secondly, we determined that the pygmy resonance in 208Pb lead vibrations involves only about 9% of all neutrons in the nucleus. This means that in the pygmy resonance only some 11 or 12 neutrons vibrate on the surface of the nucleus”, concludes Prof. Maj.

Around the world, pygmy resonance studies are becoming increasingly popular among nuclear physicists. This is because a significant role of such resonances in the development of neutron stars and in the synthesis of elements during early evolution stages of the Universe after the Big Bang.