How to uncover the true face of atomic nuclei? 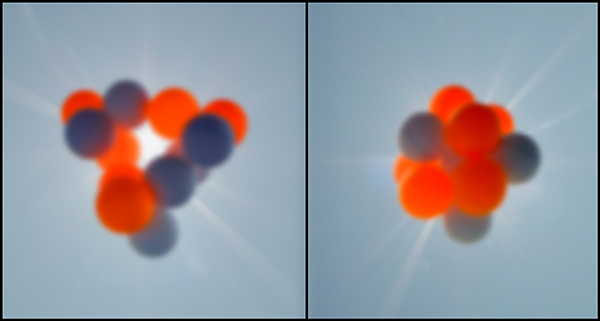 Two models of the carbon 12C nucleus. Is it formed of three alpha clusters, i.e. tightly bound quartets of two protons and two neutrons (left), or is it a uniform compound of nucleons (right)?
(Source: IFJ PAN, Tentaris)

Protons and neutrons are the basic constituents of atomic nuclei. Are they distributed homogeneously, or perhaps in quartets consisting of two protons and two neutrons? Physicists from Poland and Spain have recently presented an idea how this issue may be investigated in future experiments.

Singles or proponents of family life? According the textbooks, protons and neutrons in atomic nuclei are placed uniformly and move independently from one another. However, there are many facts hinting that the nucleons in many nuclei bind into small clusters, e.g. into helium nuclei (alpha particles) formed of two protons and two neutrons. Direct measurements of this effect are, however, quite difficult and the results, up to now, ambiguous. How can we see the true face of the atomic nucleus?

In an article published in the prestigious Physical Review Letters and recommended by the editors, physicists from the Institute of Nuclear Physics of the Polish Academy of Sciences (IFJ PAN) in Cracow and University of Granada (UG), Spain, described a novel method which in future experiments may reveal if the nucleons in nuclei indeed do cluster, or if they “live on their own”. The investigation was co-financed by the Polish National Science Center.

Suggestions that the nucleons may group into clusters in atomic nuclei appeared already more that 80 years ago. In 1931 George Gamow, a famous physicist, posed a hypothesis that the atomic nuclei are formed of the alpha particles. After many decades there is still no unambiguous experimental evidence of this fact. However, from advanced computer simulations we know, for instance, that the nucleus of beryllium 9Be is formed of two alpha clusters and an extra neutron, so it has more a shape of a dumbbell than a sphere. The so-called fragmentation experiments carried out with accelerators hint on the presence of clusters in heavier nuclei, e.g. three in carbon 12C, four in oxygen 16O, ten in calcium 40Ca, or fourteen in nickel 56Ni.

“We claim that if the structure of atomic nuclei is formed of the alpha clusters, we will be able to see its traces in the spectra of particles formed in ultra-relativistic collisions of properly chosen nuclei”, says Prof. Wojciech Broniowski (IFJ PAN), a co-author of the paper.

In these ultra-relativistic collisions the atomic nuclei move with velocities very close to the velocity of light. For that reason their spatial configuration is “frozen” during the extremely short reaction time. As a result of the collision, the quark-gluon plasma is formed, which behaves a fluid that pours out in all directions. In turns out, however, that the velocity of this flow is not the same in all directions: in some it is faster, and in some slower. These differences reflect the original shape of the colliding nuclei.

“After a few femtoseconds we arrive at an interesting moment”, notices Prof. Broniowski. “The flowing plasma cools down and freezes into hadrons which are then observed in detectors. Their velocities are somewhat higher in those directions where the flow is higher. We have shown that by measuring very accurately the particle velocities one may in a clever way recover the information on the initial shape of the colliding nuclei”.

The authors of the publication modeled the collisions of the carbon 12C nuclei on lead 208Pb. The choice of 12C is not accidental: if this nucleus is composed of three alpha clusters, it should have a triangular shape. In that situation the velocities of the produced hadrons should clearly depend on the direction, moving faster in the direction perpendicular to the edges of the triangle, and slower in the directions indicated by its corners. On the other hand, the very heavy 208Pb nucleus was necessary to guarantee the formation of the quark gluon plasma, necessary for the flow.

“Our method should also apply to heavier nuclei, such as oxygen 16O, which probably has a pyramidal shape. However, the more clusters, effectively the more spherical the nuclei are, and the differences in the hadron velocities will be more difficult to detect”, says Prof. Enrique Ruiz Arriola (UG).

Joining of objects into groups is a universal mechanism of lowering the energy of physical systems subject to attraction. It is common in Nature at all distance scales. The up and down quarks group into triplets to form nucleons, nucleons join into atomic nuclei, atoms connect into molecules, droplets of water freeze into snow flakes. At cosmic scales, the stars form galaxies and galaxies form clusters. In our life, we, the people, may form groups in winter to feel warmer ...

“We still do not know if the protons and neutrons form the alpha clusters in nuclei. However, we now know a method how to learn it in certain cases. The next step in on the experimentalists' side”, concludes Prof. Broniowski.